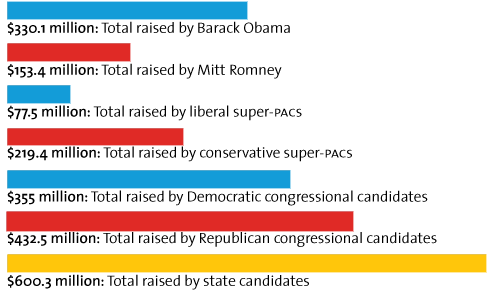 “Paul Ryan: Hustling for the 1 percent.”
—Protest signs carried by AFL-CIO members outside a Las Vegas hotel where Romney’s running mate attended a private “finance meeting” with Republican donors, including billionaire casino magnate Sheldon Adelson. Adelson has poured $36 million into conservative super-PACs and has said he’ll spend as much as $100 million to defeat President Obama. An attendee told the New York Times that he “saw no dialogue between” Ryan and Adelson.

A new dark-money group called the Special Operations Opsec Education Fund has released a 22-minute Swiftboat-esque video, “Dishonorable Disclosures” that features former special forces officers who accuse Barack Obama of leaking state secrets for political gain. The group is run in part by members of tea party groups and focuses primarily on Obama’s handling of the Osama bin Laden raid. It repeats the claim that Obama has been too boastful about the raid. “Mr. President, you did not kill Osama bin Laden,” a sneering former Navy SEAL says in the video. “America did.”

Two: The number of 501(c)(4) nonprofits that, combined, have spent more than all super-PACs combined. ProPublica reports that Karl Rove’s Crossroads GPS and the Koch-affiliated Americans for Prosperity have spent nearly $60 million on television ads, compared with $55.7 million spent by super-PACs, and $22.5 million spent by political parties. race of the week

On Tuesday, former Wisconsin Governor Tommy Thompson won a hard-fought GOP Senate primary. The antitax super-PAC Club for Growth Action spent $1.7 million on ads in support of former Rep. Mark Neumann, who finished third. Including money targeting Democratic candidate Tammy Baldwin (like $850,000 from the US Chamber of Commerce), $4.5 million in outside money has been spent on the Wisconsin Senate race. Here’s one of the ads Club for Growth ran against Thompson and challenger Eric Hovde:

• Can Harold Ickes Make It Rain for Obama?: The Democratic operative has cussed, clawed, and outsmarted his way through three dozen elections. His new fight: Stop Karl Rove and Co. from steamrolling the president.
• The Reformers Strike Back!: The conservatives behind Citizens United have lost some key fights lately. But another battle over corporate money in politics looms.
• Karl Rove’s Dark Money Group Busted for Bogus Ad: Crossroads GPS says it proactively pulled the inaccurate ad. Well, not quite.