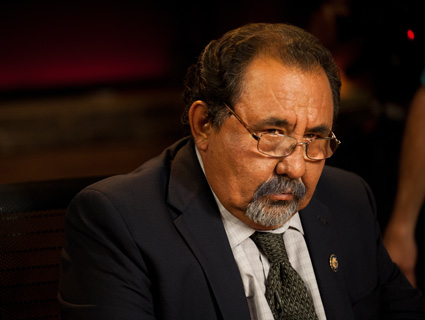 Rep. Raúl Grijalva (D-Ariz.), a progressive stalwart in Congress, doesn’t have much to worry about in his primary election Tuesday. But in the lead-up to it, Grijalva got a nasty taste of the dark-money-funded political warfare that has characterized the 2012 elections.

Voters in Grijalva’s southwestern Arizona district opened their mailboxes in recent days to find a mailer attacking their congresssman for voting to cut $716 billion from Medicare, missing more than 400 votes in Congress, and having “voted against jobs for Arizona.” The mailer’s opposite side strongly endorsed Grijalva’s opponent, Amanda Aguirre, calling her “a real Democrat who fights for the middle class.” The mailer’s source: A mysterious, blandly named super-PAC called the Opportunity for All Committee.

Opportunity for All has yet to disclose a single donor, and its official address appears to be an empty dirt lot in El Paso, Texas. Grijalva calls the group “a case study in dark money.”

Grijalva was so incensed by the anonymous attacks on him that he called a press conference to rebut them. In a phone interview Monday afternoon, Grijalva told me he felt compelled to respond to Opportunity for All because he saw the group’s mailers as an effort to mislead voters by distorting his record. “We saw we were gonna be victims to this bullshit, and so [we] decided we’re gonna push back,” he says.

Sierra told me in an email that Opportunity for All “just started and of course I will be disclosing my donors.” In another email he said that he created his super-PAC to push the broader agenda of his new political consulting firm, Sierra Public Affairs: “moderating politics.” That’s shorthand, he says, for booting out the more ideological members of the Democratic and Republican parties. “I’m going after left-wingers and right-wingers,” he told me. “My next project is going after Sheriff Joe Arpaio…I know I will make enemies but our country needs an ass-kicking.”

Given his history, it’s somewhat unusual that Sierra would embrace the big money politics of 2012 in his quixotic mission to temper politics. Until this spring, Sierra worked for Roemer, a charismatic, long-shot candidate who refused to accept donations greater than $100 and assailed the influence of big donors, super-PACs, and shadowy nonprofits. After abandoning his presidential bid, Roemer started the Reform Project to press for reforms such as term limits and campaign finance caps.

Sierra says Roemer is “a political hero of mine.” But he and Roemer differ on how to make the changes they believe are necessary. “I fight fire with fire and Buddy fights it by example,” Sierra says. “I should be allowed to start my own committee and go after politicians that are bad for our country, and I am doing that. The Raúl Grijalvas and the Mitch McConnells of the world need to go.”

Grijalva, for his part, says his opponent in his Democratic primary, Amanda Aguirre, is in fact a Republican in disguise. He points to photos of Sierra alongside an Aguirre campaign staffer as evidence that Sierra and Aguirre are in cahoots in trying to oust Grijalva. He also says tactics like Sierra’s are bound to cause headaches in other districts nationwide. “I’m not the only one who has to deal with this stuff,” he says. “I don’t know how it’s playing elsewhere, but I’m not taking it lying down.”