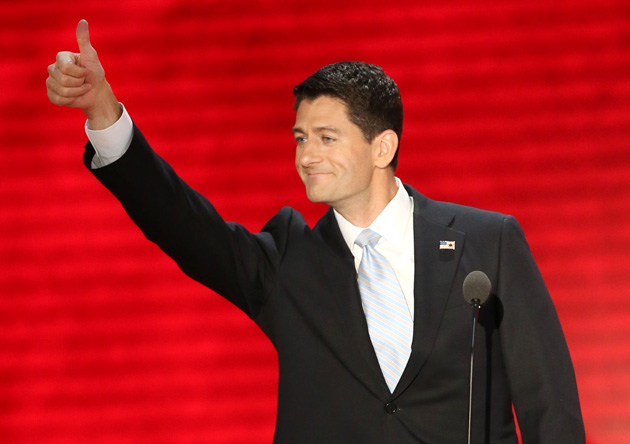 If there is a bedrock of conventional wisdom in presidential politics, it is this: First, succeed in the primaries by winning over the base, and then move to the center in the general election to court independent and middle-of-the-road voters. So where is Mitt Romney’s pivot to the center?

Throughout his political career, Romney has demonstrated a high degree of flexibility. But he has yet to employ those skills as the final stage of this presidential slog begins. And with Rep. Paul Ryan’s fiery speech at the GOP convention on Wednesday night, it was clear that Romney did not pick Ryan to appeal to the undecideds in the middle. The speech was an indication that the Romney crew has gone rogue—or completely tea party.

Speaking with poise and brimming with cocky confidence, Ryan took the predictable shots, deriding the stimulus and Obamacare. He devoted a long riff to the unfounded Romney charge that President Obama cut $716 billion from Medicare. He blasted Obama for not being serious about deficit reduction, going as far as to chide Obama for not fully embracing the bipartisan Simpson-Bowles deficit reduction plan that Ryan and other Republicans refused to support (because it called for modest tax hikes on the well-to-do). Before the pumped-up crowd of GOP delegates, Ryan blamed the closure of a GM plant in his hometown of Janesville, Wisconsin, on Obama’s policies—though the factory was shuttered before Obama became president. He did not refer to the successful auto industry bailout.

On Medicare, Ryan repeated the familiar GOP whine that Democrats are demagogues when they assail Ryan’s budget plan for ending the Medicare guarantee. “We want this debate,” he proclaimed. “We will win this debate.”

“They’re in a mania,” one former Bush adviser said about the Romney campaign. “They think America is ready for a grand reconfiguration of its social insurance system.”

All of this was to be expected, and Ryan delivered the goods effectively, with his gee-whiz, winning manner and shrewd rhetoric. But he offered more: an undiluted tea party view of the world.  He declared that the only way to juice the economy is to place “hard limits on the size of government,” and he described Obamaland in the darkest (and Ayn Randiest) terms: “The best this administration offers [is] a dull, adventureless journey from one entitlement to the next, a government-planned life, a country where everything is free but us.”

Ryan went on in this fashion: “Listen to the way we’re spoken to already, as if everyone is stuck in some class or station in life, victims of circumstances beyond our control, with government there to help us cope with our fate.”

His message literally was: You should be on your own, left alone to define your own journey, your own happiness. (Unless of course, there is an unwanted pregnancy, even one that occurred due to rape.) “That’s the American Dream,” he contended. “That’s freedom, and I’ll take it any day over the supervision and sanctimony of the central planners.”

With such language—which was vetted by Romney Central Command—Ryan was not pressing the obvious case that Romney is a pragmatic Mr. Fixit who could be a competent steward of the still-struggling American economy. He was announcing that he and Romney aim to remake American society. He was essentially issuing a declaration of ideological warfare: Government is the enemy of freedom and the cause of the nation’s economic woes; it must be crushed. And, yes, taxes must be slashed for all, which would include those on the highest rungs.

This played well among the delegates, many of whom are no strangers to privilege and entitlement. But the question is, do middle-class voters worried about the economy (especially those who are still undecided) see sanctimonious central planners in Washington as the main evil and believe that they would prosper if government would just leave them alone? As they ponder their own immediate difficulties, do these voters conclude that dependency on government has been the cause of economic decline, and that a fundamental reshaping of the relationship between the government and citizenry is what’s most needed?

Ryan was selling libertarian articles of faith: Downsize the government and the welfare state, and all will be well; the economic downturn had nothing to do with corporate shenanigans or deregulation; and if the Medicare guarantee is dumped, the elderly will fare better in the free-flowing corporate marketplace. Trust in this theology, he was saying, and the nation will revive—and he was not just speaking for himself. This was now the official sales pitch of the Romney-Ryan ticket.

Hours before Ryan’s speech, I asked a former George W. Bush administration official about the Ryan pick. He admitted to being baffled, even after talking to Romney aides about the choice. “They’re in a mania,” he said. “They think America is ready for a grand reconfiguration of its social insurance system. It’s like they’re in the middle of their own housing bubble, and they’re talking only to themselves.”

When I asked a top Republican who advises the Romney campaign—but who is not a member of its inner circle—why Romney had not yet gyrated toward the middle, he replied that the Romney campaign has become “preconditioned” to placating conservatives. “They were in that mode for a year during the primaries and can’t get out of it.” That, he said, explained Ryan.

The once-moderate former governor of Massachusetts has adopted the fresh-faced policy minister of the tea party as his political son, and on Wednesday night allowed him to frame the story of the 2012 campaign in stark ideological terms. With Romney’s big night approaching, this politician so often accused of flip-floppery and situational shifting was not moving to the middle but embracing a fundamental extremism. The full tea-partyization of Mitt Romney was nearing completion.