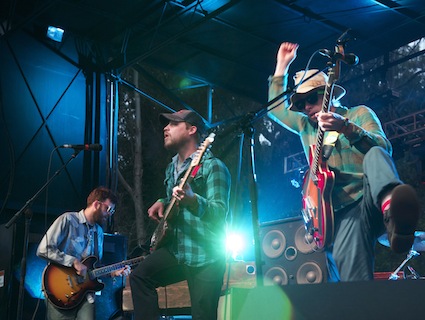 It’s after dark on a Saturday when San Francisco’s preeminent garage rockers Thee Oh Sees take the stage for their Outside Lands music festival set. Frontman John Dwyer and his guitar send shuddering distortion through the packed pit; crowd-surfers hurl themselves from one set of hands to the next. My own limbs rattle from the bass. But while the sound is forceful, those of us in the audience are at the mercy of no ordinary stage system—instead, this one runs on solar.

To skeptics, solar-powered stages might sound like a gag, a green washing hijink for mild-mannered acoustic bands at best. But Mark McLarry of Alternative Power Productions, the company running Outside Lands’ solar stage, has been in the business of providing music festivals with real, concert-grade sound since 2005, and his stages keep getting bigger.

A day earlier, McLarry, a surfing aficionado and young father of two, led me up a metal ramp to the side of the stage where Thee Oh Sees would play. To festival-goers, the site is known as the Panhandle stage, but to those behind-the-scenes, it’s the 32-by-32-foot Helios SL250, the largest solar-powered stage in the country, and Alternative Power Productions and Kleege Industries’ latest model. Beaming, McLarry throws open the lid to a nondescript black box nestled in the stage’s right side, revealing two 800-amp, 3,500-pound batteries and four 30-amp inverters stacked like ribs. Together, they work to store and pump energy from the solar panels on the roof through the stage’s sound and light system, enough to power 12 half-hour sets a day. A poster of a grinning, demonic clown is taped to the inside of one of the doors. “I think that’s left over from the Warped Tour,” McLarry explains.

In 2008, the same year that Outside Lands featured its first Panhandle stage, Vans Warped Tour started schlepping its own small 16-by-16-foot solar piece for its annual summer-long pilgrimage across the country. Today, the hardcore mobile music festival brings along two. Kevin Lyman, who created Warped Tour in 1995, tells me that this last round of touring the stages didn’t even need the backup generators that automatically kick in when power’s low—the stored solar energy in the giant batteries was enough.

“The panels have gotten more efficient,” Lyman tells me over the phone. “And the surface space and the batteries have become much more compatible and last longer.”

Weight, however, remains a problem. Hauling the massive batteries requires its own energy-suck, and there are still back-up generators to deal with. Warped Tour buses run on biodiesel, but the total festival effort requires 5,000 gallons of it on site per day. “I don’t think we can make a festival completely green,” Lyman says. “But I’m hoping that eventually that solar panels get so efficient that we run our main stages on it. I’m hoping someone brings me that technology.”

McLarry, too, is hoping the batteries one day will shrink, in addition to the cost. “If lithium technology could get a little more affordable, that’s another step.”

But for now, it seems like the biggest hurdle, reliability, has been conquered. “There’s just no drama with this stuff,” says Tim Allyn, owner of Sustainability is Designed, a company that has worked with Warped Tour’s solar stages and helps Coachella recycle, compost, and carpool. “The solar panels show up. You plug ’em in to an inverter. You back the system up with a generator.”

After everything is unplugged and packed up, the Helios will be out and on the road again. Next, it’ll journey to the yacht competition America’s Cup and the Long Beach Funk Fest.

“I think in the beginning a lot of people were basically doing it because of the added value, the attention it brought to the event,” McLarry says. But after years showcasing the solar sound in action, McLarry thinks demand for these kind of stages will continue to increase. “As I progressed, people were like, ‘Oh, and it works too.'”