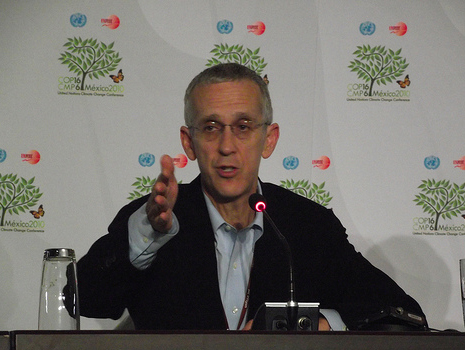 US climate envoy Todd Stern is stirring up some international debate after suggesting that the world should drop the goal of limiting global temperature rise to 2 degrees Celsius (3.6°F).

To recap, back during the 2009 climate negotiations in Copenhagen, the US and other countries reached a non-binding political agreement that, among other things, stated that they would aim to limit global warming to 2 degrees Celsius. (And that goal was contentious, as many of the most-impacted and least-developed countries wanted a goal of 1.5 degrees.) Two years later, in Durban, negotiators outlined a path forward for a legal agreement, stating that they would try to negotiate a deal by 2015 that would take effect in 2020.

So, when Stern suggested ditching that goal in recent remarks at Dartmouth College (via Climate Progress), other countries were none too happy. Here’s what Stern said:

This kind of flexible, evolving legal agreement cannot guarantee that we meet a 2 degree goal, but insisting on a structure that would guarantee such a goal will only lead to deadlock. It is more important to start now with a regime that can get us going in the right direction and that is built in a way maximally conducive to raising ambition, spurring innovation, and building political will.

The European Union and small island states are understandably upset about the remark. It’s worth noting that the world is on path right now to blow right past 2 degrees and head right to 4 degrees warming. But setting a goal of 2 degrees is one of the only things that countries have actually committed to over the past few years of tepid, wishy-washy half-agreements under the United Nations Framework Convention on Climate Change. It’s one of the few remotely ambitious commitments out there. And one of, if not the main, reasons that the commitments lack ambition has been the US, which keeps arguing for “flexible, evolving” agreements rather than a binding legal treaty.

UPDATE 8/8/12, 1:26 PM EDT:  Stern released a statement Wednesday claiming that his remarks were misinterpreted, while still saying that an approach that would “guarantee such a goal” would likely fail:

There have been some incorrect reports about comments I made in a recent speech relating to our global climate goal of holding the increase in global average temperature to below 2 degrees Celsius. Of course, the US continues to support this goal; we have not changed our policy. My point in the speech was that insisting on an approach that would purport to guarantee such a goal—essentially by dividing up carbon rights to the atmosphere—will only lead to stalemate given the very different views countries would have on how such apportionment should be made. My view is that a more flexible approach will give us a better chance to actually conclude an effective new agreement and meet the goal we all share.