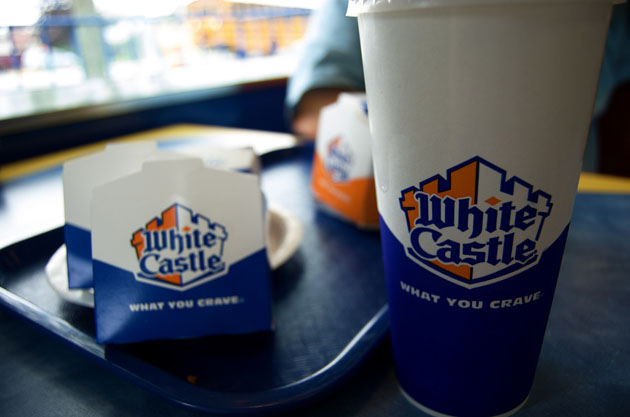 In early July, Jamie Richardson, the vice president of the famous burger chain White Castle, told a congressional committee that Obamacare will devastate the home of the “original slider.”

Richardson’s testimony was the latest move in a long campaign against health care reform. In recent years, White Castle has warned that President Barack Obama’s Affordable Care Act will increase its health care costs by 20 percent or more in 2014, halving its profits and preventing it from expanding access to its delicious fare. Conservative media outlets and politicians have eagerly rushed to White Castle’s ramparts: House Speaker John Boehner, a lifelong slider fan, warned in 2010 that Obamacare meant “fewer jobs, fewer sliders,” and the Weekly Standard speculated that Kal Penn, star of the stoner cult film Harold and Kumar Go to White Castle, quit his job working at the White House because he “couldn’t countenance the War on White Castle.”

But Harold and Kumar can rest easy: The evidence suggests Boehner and White Castle are exaggerating the impact the ACA will have on America’s strategic slider reserve.

Most fast food companies, including McDonald’s and Burger King, tend to only offer low-wage employees high-deductible insurance plans that max out at between $2,000 and $10,000—not much better than having no coverage at all. White Castle, though, has been providing relatively decent health insurance to its full-time employees since 1924. As Richardson told me in an interview, “Our founder thought we should offer ‘freedom from anxiety’ for team members.” To that end, the company offers full-time employees a bona fide pension plan. “We’re a little old school,” Richardson says.

White Castle picks up about 80 percent of the cost of employee insurance premiums, though part-time employees aren’t eligible, and full-time employees aren’t eligible until they’ve worked for six months. (Nearly 60 percent of the company’s workforce quits within the first year, so this whittles down the pool of eligible workers considerably.) The company began waiving co-pays for preventive care in 2009, before a similar requirement in the health reform law went into effect.

As burger chains go, White Castle provides a powerful example for those looking to repeal Obamacare—it’s a company that actually wants to provide insurance to its employees. But the company has deep ties with opponents of health care reform. Richardson testified on behalf of the National Restaurant Association, a group that has been fighting health care reform for decades. And White Castle, which is based in Boehner’s home state of Ohio, is closely allied with the speaker. It donated $25,000 to a Boehner-linked super-PAC, and last year, it formally inducted him into its “Cravers Hall of Fame,” alongside the creators of Harold & Kumar and “Nips the Pig.” The company’s PAC has given several hundred thousand dollars to candidates for federal office over the past two decades; almost all of that money has gone to Republicans.

Given White Castle’s alliance with the GOP, it’s less surprising that many of the company’s calculations about the health reform law are based on extremely negative speculation about how the law will be implemented.

Take Richardson’s claim that Obamacare will cut White Castle’s profits in half. This charge is based on a single provision in the law, a requirement that larger companies that provide no insurance, expensive insurance, or lousy insurance pay a $3,000 per employee penalty. White Castle, because it already provides insurance, would only have to pay the $3,000 penalty for full-time employees whose out-of-pocket premium costs exceed 9.5 percent of their household income. White Castle employs very few—and perhaps zero—people who fit that description. Even then, the company would only have to pay if those employees purchased health insurance from an outside health insurance market, known as an exchange, and received tax credits to do so. (Here’s a chart explaining how the penalty works.)

I quizzed Richardson recently about the details of his profit-halving assertion, and he said that currently, the average White Castle burger flipper who works more than 35 hours a week pays about $92 a month for individual health insurance. Nearly 60 percent of White Castle’s covered employees fall into this category. (More than 40 percent of White Castle’s workforce is under 25, meaning they are generally young, healthy, and cheap to insure.)

For a White Castle employee—let’s call him Pookie—working 35 hours a week at minimum wage, $92 a month would represent about 9 percent of household income. That’s below the 9.5 percent level where the $3,000 penalty kicks in, so White Castle won’t have to pay. If Pookie were paid more, as Richardson says most White Castle employees are, or worked a few more hours a week, it’s not even a close call. And even if White Castle was facing the penalty, it would be cheaper for the company to pick up a few extra dollars of the premium for its employees on the edge of the 9.5 percent rule than to pay the $3,000 penalty.

If White Castle foolishly decided not to pick up those extra few bucks of premium costs, it still might avoid paying the penalty. Most of its low-wage and young employees are now eligible to get unsubsidized insurance coverage through their parents’ plans through age 25. Were they to do that, rather than buy their own plans on the exchange using a tax credit, White Castle wouldn’t have to pay the penalty, either.

Richardson also testified in July that White Castle worries it might be taxed for providing employees too much insurance. This claim is also unlikely to be true. For White Castle to run into tax issues for providing too much health insurance—$10,200 a year worth for a single employee—it would have to nearly double the amount it currently pays for health insurance, offering full-time minimum-wage workers an insurance plan worth nearly their annual income. “The number they made up is indeed crazy,” says Jonathan Gruber, an MIT professor who helped create both the Massachusetts health care reform law implemented by Mitt Romney and President Obama’s plan.

Richardson has also complained that Obamacare will eventually require that White Castle automatically enroll all of its full-time employees in its insurance plan. Only 3,900 of White Castle’s 5,200 full-timers have coverage now, and providing insurance for everyone could cost the company a bundle. But Richardson concedes that the company would likely avoid the costs by shifting hours so that many full-time employees would be classified as part-time, and wouldn’t have to be automatically placed in the company plan.

It might seem undesirable for White Castle to force some of its workers to work fewer hours. But under Obamacare, those part-timers would be able to get subsidized health insurance from the exchanges and would be free to look for better jobs without having to worry about losing their coverage. There’s no way of knowing how many of those people might secure higher-paying jobs elsewhere if they weren’t chained to the White Castle deep fryer because of their dire need for insurance. Obamacare could liberate those people from dead-end jobs while freeing White Castle from having to pay for their health care, a potential net plus for everyone.