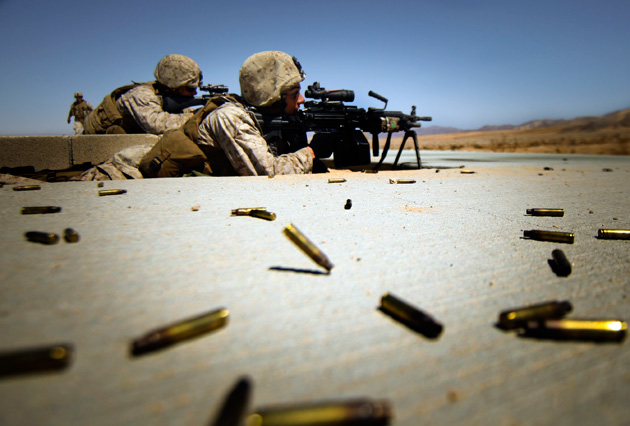 Update, Thursday, September 13, 2:30 p.m. PDT: Mother Jones has obtained a memorandum from the Marine Corps’ congressional liaison confirming that the Marine guards at the embassy in Egypt were in fact armed with live ammunition, contrary to the anti-Obama conspiracy theory du jour:

The Ambassador did not impose restrictions on weapons or weapons status on the Marine Corps Embassy Security Group (MCESG) detachment. The MCESG Marines in Cairo were allowed to have live ammunition in their weapons. The Ambassador and Regional Security Officer have been completely and appropriately engaged with the security situation. Reports of Marines not being able to have their weapons loaded per direction from the Ambassador are not accurate.

The full text of the memo is at the bottom of this post.

Early Thursday morning, conservative military bloggers began to float reports that the US ambassador to Egypt, Anne Patterson, did not permit US Marine security guards to carry live ammunition. Within hours, this “no ammo” rumor in response to the embassy attack in Cairo lit up right-wing social media, with the allegation unquestioningly blamed on the White House. Conservative thought-leaders and pundits led the charge:

From a neocon torch bearer:

So Marines in Benghazi like Bobbies in London. Very leading-from-behindish.

to a Breitbart editor:

to a co-host on Glenn Beck’s radio network:

Under orders from Obama administration–NO AMMO for Marines at Cairo Embassyfreebeacon.com/reports-marine…

From there, the “news” trickled down to conservative foot soldiers:

OBAMA sends Marines but tells them no use of LIVE AMMO ..like sitting ducks..who the hell is this LUNATIC in the WH#p2 #ocra

Marines under fire w/no ammo Worst Thing I Have Ever Heard. I am in a Rage. Obama is what US Marines scrape off bottom of their boots.

Marines not allowed live ammo at US Embassies?freebeacon.com/reports-marine…why not arm them with bean bags or feathers?Obama unelectable

RT @quark1217: The “commander in chief” must think these are war games—>“@fritzster: Marines not permitted live ammo t.co/jR …

The sole source for this assertion was Nightwatch—a conservative “intelligence” blog written by former Defense Department analyst John McCreary and hosted by a subsidiary of a defense contractors’ lobby group—which attributed the report to unnamed (and uncounted) “USMC blogs.” According to McCreary, Patterson—a career foreign service officer who was not a political appointee, and who served George W. Bush as an ambassador to the United Nations and to Pakistan—”did not defend U.S. sovereign territory and betrayed her oath of office.” And: “She neutered the Marines posted to defend the embassy, trusting the Egyptians over the Marines.”

These claims were quickly perpetuated by the right-wing Washington Free Beacon and Fox Nation sites, despite never having been confirmed—and they are highly unlikely to be true. Patterson was in Washington at the time of the protests, leaving the deputy chief of mission in charge, and he would have had responsibility for issuing orders to guards, along with the embassy’s regional security officer, a specially trained State Department official. State’s own guidelines for Marine security guards (PDF) require that any duty assigned to them “shall not contravene established Department or Marine Corps policy and shall not unduly jeopardize the safety or well-being of any Marine.” That’s a pretty straightforward way of saying Marines don’t lay down their arms if danger is imminent, no matter what a diplomat says. Unless, of course, you’re willing to believe the worst about POTUS and his diplomatic corps.

Pentagon spokesman George Little dismissed the allegations Thursday afternoon. “With or without a weapon, Marines are always armed,” he told Time‘s Mark Thompson. “I’ve heard nothing to suggest they don’t have ammunition.”

I reached McCreary by email but haven’t gotten any answers from him to my questions about where his information comes from; if he provides answers I’ll add an update. (I’ve also contacted the US embassy in Cairo for a response.)

Indeed, this appears to be the latest incarnation of a pervasive myth that military “rules of engagement” under Barack Obama have limited soldiers’ ability to defend themselves and defeat enemies—which is itself a variation on the old conservative canard that we’d have won Vietnam if only liberal peaceniks hadn’t gotten in the way of the warfighters. (In fact, there was some grumbling among troops about restrictive Afghanistan rules of engagement in 2009-10 under Gen. Stanley McChrystal—and his replacement, Gen. David Petraeus, reviewed the ROE and clarified them for rank-and-file combatants. In other words, while the president may call the strategic shots, the generals take care of front-line tactics.)

McCreary and his followers are playing to emotions surrounding the four American deaths in Libya, but they don’t bother to consider how the Marines might have actually used steel-jacketed, high-powered .223 rifle cartridges in Cairo, which was a different situation involving street protesters. Should they have gunned the protesters down? About the only thing the conservative blogosphere knows for sure is: Whatever happened, it must be the president’s fault.

The following information is provided regarding Marine involvement in the recent actions in Egypt and Libya:

Egypt:
-The Ambassador did not impose restrictions on weapons or weapons status on the Marine Corps Embassy Security Group (MCESG) detachment.  The MCESG Marines in Cairo were allowed to have live ammunition in their weapons.  The Ambassador and Regional Security Officer have been completely and appropriately engaged with the security situation. Reports of Marines not being able to have their weapons loaded per direction from the Ambassador are not accurate.
– The Marine Corps does not establish Rules of Engagement (ROE). Nonetheless, ROE is classified and release of that information would jeopardize the Marines and U.S. interests.  Any further inquiry should be directed to the State Department, since Marine security guards report to the ambassador not to a military commander.
-As reported in open sources, approximately 2000 personnel were protesting outside the U.S. Embassy and six individuals entered Embassy grounds.  The Marines quickly took control of these six individuals and subsequently turned them over to local security officials.
-There were no Marines injured in this, or other actions in Cairo.
-There are no Marine dependents in Cairo.

Yemen:
-The American Embassy in Sana’a, Yemen has a MCESG reinforced with a Marine security force.  Due to operational security, we are not at liberty to provide additional details at this time.

Marine Corps Embassy Security Guards (MCESG):
Embassy security in Tripoli and the consulate in Benghazi fall under the Regional Security Officer with the State Department.  The U.S. maintains over 285 diplomatic facilities worldwide.  MCESG provides 152 security detachments provide internal security at designated U.S. diplomatic and consular facilities in order to prevent the compromise of classified material vital to the national security of the United States.  Perimeter security is the responsibility of the host nation police/security forces.  AMEMB Tripoli does not have a MCESG detachment.  Typically, when a new embassy is established, it takes time to grow a new MCESG detachment.  In coordination with the State Department, there was discussion about establishing a detachment in Tripoli sometime in the next five years.  Overall, the plan is to grow the number of MCESG detachments worldwide to 173. The size of a MCESG detachment depends on the size of the Embassy and the security situation on the ground.  They normally range anywhere from 5-20+ Marines in size.  MCESG can, and have, provided security at Consulates as well as Embassies.  For example, Marines guard the US Consulate in Hong Kong and, in the past, have guarded the US Consulate in addition to the Embassy in Haiti.  The decision as to which consulates receive this augmented security lies with the State Department.  State identifies its requirements and DOD/Marines work to provide it.  A U.S. Ambassador serving in an unstable region can/will normally have a security detail provided by the State Departments Diplomatic Security Corps.  State has agents specially trained to provide personal security details (similar to the Secret Service). Stephanie Hoostal at the State Liaison Office (B-330) can be reached at 6-4542 if you have questions specific to the State Dept.

NOTE:  Although a Marine Expeditionary Unit (MEU) has traditionally been forward deployed to the Mediterranean (2.5 MEU forward deployment-1 x east coast MEU to the Med, 1 x west coast MEU to the Pacific, and the 31st MEU forward based out of Okinawa, Japan), there is currently no MEU presence in the Mediterranean.  The Marine Corps currently maintains a 1.5 MEU presence forward deployed.  We currently have the 24th MEU from the east coast deployed to the Persian Gulf, a west coast MEU is conducting work-ups for deployment, and the 31st MEU is operating from Okinawa.

Please see the attachments for more information on FAST or MCESG.  If you have any questions, please do not hesitate to contact your Marine Corps Liaison Office in RHOB-B324.