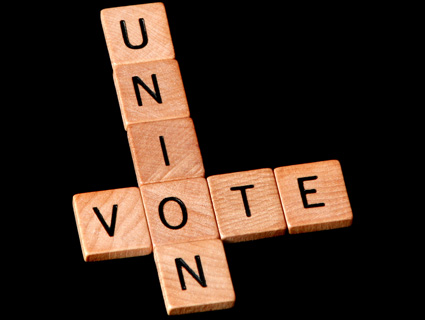 There is no way to sugarcoat it: Labor unions got shafted in the planning of the 2012 Democratic National Convention. Labor leaders say they weren’t consulted before Democrats picked Charlotte, North Carolina, an anti-union city in a “right-to-work” state, to host their quadrennial confab. After pumping $8.5 million into the 2008 Democratic convention, many unions decided against funding this year’s convention, and they threw their own “Workers Stand for America” rally in Philadelphia last month.

But don’t be fooled into thinking union leaders and rank-and-file members are avoiding the Democratic convention. Labor is here—and it’s on a mission.

See our full coverage of the 2012 Democratic National Convention.

You might say union members are using the convention as a teachable moment. Here, in a state with the lowest unionization rate in America (2.9 percent), union workers are telling anybody who’ll listen about the benefits of joining a union, and also trying to defuse the stereotypes of union members as greedy or thuggish. “We’re here to spread the word,” says Lillian Roberts, executive director of the New York City affiliate of American Federation of State, County, and Municipal Employees (AFSCME), the city’s largest public worker union. The convention “is an excellent way to educate people here on how important labor is.”

On Monday, union members walked the streets of Charlotte and handed out AFL-CIO fliers titled “What’s so good about unions anyway?” The fliers touted unions’ efforts to give workers more input in their employers’ business decisions and helping to “balance the power of big corporations and create a fair economy.” In the wake of fights over collective bargaining rights in Wisconsin and Ohio, the flier reads, “When working people have the right to bargain collectively at work, it’s good for us, for our communities, and for the whole economy.”

The North Carolina AFL-CIO union took direct aim at the stereotype of “union thugs” here on the streets of Charlotte. At an event called “Hug-a-Thug” on Monday, state AFL-CIO members dished out hugs aplenty to friendly passersby amid the hubbub of the CarolinaFest street fair. Several other unions hosted booths at CarolinaFest, chatting up the crowd and handing out pamphlets, stickers, and more.

Jaime Rodriguez, an employee with the American Federation of Teachers in Oregon, says his message to North Carolinians echoes one of the themes in heard in Tuesday’s speeches—the idea that everyone deserves the opportunity to succeed and earn a living wage. Rodriguez says his conversations with locals have stressed how union representation benefits not just union members but also nonmembers. “A union job means higher wages for everybody,” Rodriguez says. “People here hopefully will realize that.”

The official convention proceedings present union leaders with a national platform to reach millions of Americans. Mary Kay Henry, president of the Service Employees International Union, spoke on Tuesday night, giving a full-throated defense of Obama and a rousing call for working people to rally around the president and reelect him in November. “Middle-class Americans cannot afford four years of Romney economics,” she said. “We need a president who fights for us, and that’s what we have in President Barack Obama.” United Auto Workers president Bob King and AFL-CIO president Richard Trumka are set to speak tonight.

Not all union members have embraced labor’s lemons-into-lemonade strategy here in Charlotte. At a Baptist church just outside of the city, the Los Angeles Times reported, labor organizers circulated an open letter to Obama noting that North Carolina “has been cited by the United Nations’ International Labor Organization for its violations of international labor standards.”

Nick Ciaramitaro, the legislative director for a Michigan branch of AFSCME, sees North Carolina’s hostility to organized labor as “an opportunity to show a right-to-work state how unions work and work well.” He told me that labor’s anger at the Democratic Party for picking Charlotte was “ancient history,” and that he looked forward to spreading his union’s message far and wide. “We’re here showing people we don’t have horns,” he says. “We’ll win hearts and minds.”