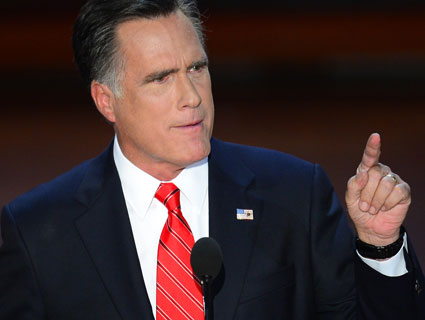 In the week since I made public the secret video of Mitt Romney at a private Boca Raton fundraiser denigrating almost half of America as moochers and victims, I’ve been repeatedly asked what I consider the most damaging—or damning—portion of Romney’s remarks. I’ve noted that the great thing about this story is that people can watch the video for themselves—7 million people went to this site or YouTube in the first days of the video’s release and did that—and reach their own conclusions.

Yet one sentence did stand out to me. When Romney was in mid-rant about the 47 percent—simplistically and erroneously conflating three subsets of Americans: those who voted for Barack Obama, those who receive some form of government assistance, and those who pay no federal income taxes—he said:

I’ll never convince them that they should take personal responsibility and care for their lives.

Here was Romney sharing his view that Americans who don’t make enough money to pay income taxes and his fellow citizens who rely on Medicare, Medicaid, food stamps, or other government programs are lesser people than he and the millionaires before him. These people, Romney was saying, are not adults; they do not, and will not, fend for themselves or do what they must to feed, clothe, shelter, educate, and care for themselves and their family members. It was an arrogant insult spoken with true detachment. This was 100-percent 1-percent.

My view of this one line was reinforced this morning. I walked into a store to buy some cleaning products. The 40-something woman at the counter rang up the purchases and kept looking at me. Once I had paid, she said in a low voice, “I really don’t want to bother you, but…”

Go ahead, I said.

But I know who you are, and I just want to say that Mitt Romney doesn’t know what he’s talking about. Not at all. I am college-educated, but look where I’m working now. I can’t find a better job now. And, and….

She paused and lowered her voice more:

I’m on food stamps. I didn’t have a choice. I’m making about $12,000 a year now. And I need them. I work hard. And I’m looking for other work. But just because I’m on food stamps doesn’t mean I’m not taking care of myself. Doesn’t he know that? Doesn’t he get it?

Apparently not. Many people on food stamps, Medicaid, and the like do strive to provide for themselves and their families. The working poor…work. They may even park cars at fancy fundraisers for minimum wage. Romney all-too glibly characterized anyone receiving any public assistance as a parasitic freeloader, and he revealed an us-versus-them attitude that was tremendously ungracious, mean-spirited, and predicated on ignorance of the real world.

“Thank you, thank you,” the woman said. “You showed us what he really thinks of us, what he thinks of me.”