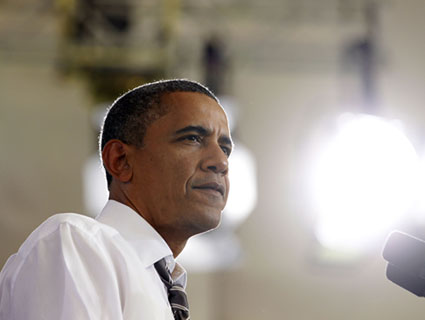 In Tampa, Mitt Romney delivered a 4,000-word acceptance speech and devoted only a sliver of the address to what he would do as president, briefly describing the most generic policy aims: achieve energy independence, promote school choice, improve trade policies, cut the deficit, cut taxes, and kill Obamacare. In a speech mainly designed to re-reintroduce him as a solid business-minded fellow who could be trusted to do fine as an anyone-but-Obama president, Romney provided no details on how he’d do any of this. And senior Democratic and Obama campaign officials believe that Romney’s vagueness has afforded President Barack Obama a significant opening to exploit at the Democratic convention in Charlotte.

See our full coverage of the 2012 Democratic National Convention.

“We’ve been talking about this all week,” Obama campaign spokesman Ben LaBolt said on Tuesday, hours before the convention opened. “For months, the Romney campaign said his speech would be when they would introduce Romney and his plans, but there were no specifics…They didn’t fill in the holes.”

A Democratic strategist advising the campaign, who is not authorized to speak publicly for it, noted, “As soon as Romney was done, we saw the chance to do something Romney failed to do: to spell out what Obama would do if elected.”

The Obama crew’s response to Romney’s surface-skimming speech was not a partisan reflex. Days afterward, Bill Kristol, the neoconservative commentator who loves to be cranky about Romney, slapped the Republican presidential nominee for not describing what he’d do in the Oval Office:

I thought that they should do a more forward-looking emphasis on the next four years. They thought they’re comfortable with asking voters to pass judgment on the last four years and…just reassuring people about Mitt Romney.

You talk to the top Romney strategists, they use that word an awful lot. We have to reassure voters about Mitt Romney. He doesn’t hate women, he’s a likable guy. He’s a generous guy. The Republican Party is diverse. That’s enough, plus the case against Obama. That’s their theory of the race and they had a convention that fit with their theory of the race. If you believe and I’m more inclined to this other belief, that you need to actually convince voters by making a positive case for the Romney-Ryan ticket, there was much less of that.

With his speech, Romney certainly didn’t use policy details to attract voters. And voters, for this or other reasons, did not react strongly. Gallup found that only 38 percent judged Romney’s speech excellent or good. This was the lowest mark in years for a presidential acceptance speech (John McCain in 2008, 47 percent; Obama in 2008, 58 percent; George W. Bush in 2004, 49 percent; John Kerry in 2004, 52 percent; Al Gore in 2000, 51 percent; Bush in 2000, 51 percent; Bob Dole in 1996, 52 percent). Going light on the policy substance didn’t seem to help Romney, who appears to have earned no significant boost from his convention.

So Obama and his top aides have been looking to draw a strong contrast with Romney on this front. But that doesn’t mean Obama’s speech on Thursday night will be a State of the Union litany of policy initiatives and proposals, according to LaBolt. He notes that over the course of the convention various Democratic speakers will describe Obama’s plans to continue investments in infrastructure, energy independence, education, and jobs initiatives, as well as push his shared-sacrifice approach to deficit reduction. (Of course, whatever Obama and his party comrades propose or promote, they will still likely face an intransigent GOP on Capitol Hill, and they need to remind voters of that.)

“We’ve all been talking about what could go into this speech to show Obama has concrete ideas on what to do to deal with jobs and the economy in a second term, ” says an Obama campaign adviser.

LaBolt would not say whether Obama would unveil any new policy initiatives in his speech—which would be one way to distinguish his performance from Romney’s. But another campaign adviser noted, “We’ve all been talking about what could go into this speech to show Obama has concrete ideas on what to do to deal with jobs and the economy in a second term.”

There’s a lot for Obama to accomplish with his big speech. He has to speak to voters disappointed that he has not changed the hyperpartisan ways of Washington and those discouraged by the sluggish recovery. Democratic strategists Stan Greenberg and James Carville on Tuesday circulated a memo outlining no less than six major themes Obama has to pound: “Go big and aspirational”; declare, “I’ll tax the rich, he’ll cut their taxes”; define Romney as the leader of a party that exalts trickle-down economics and corporate special interests; embrace Obamacare; speak for the vulnerable; and remind the nation of the GOP’s not-so-hidden social agenda.

But Obama’s top priority is demonstrating to voters—that is, those few undecided in the few swing states—that he truly has a handle on the nation’s future, immediate and long-term. Romney’s attempt at that had little substance. (He merely promised a nonspecific “five-step plan” that would boost employment by 12 million jobs—the number that many economists believe will be reached in the next four years without Romney’s plan.) Obama has the chance to show these critical voters that his vision for what lies ahead is tethered to policies, not platitudes. “We will make clear what steps the president will take,” LaBolt said. And thanks to Romney, the bar for doing so is rather low.