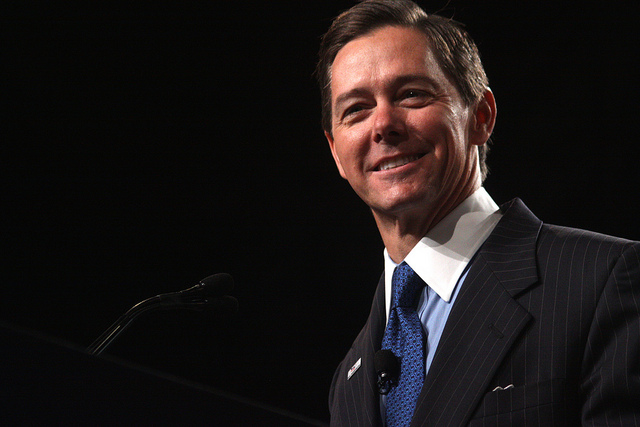 A mailer blasted out by the Faith and Freedom Coalition, a nonprofit group spending millions of dollars to mobilize evangelical voters this November to help Mitt Romney’s campaign, compares President Barack Obama’s policies to the threat posed by Nazi Germany and Japan during World War II. It also says that Obama has “Communist beliefs.” A copy of this so-called “Voter Registration Confirmation Survey” was obtained by Mother Jones after it was sent to the home of a registered Republican voter.

The Faith and Freedom Coalition is the brainchild of Ralph Reed, the former head of the Christian Coalition who was once hailed as “the right hand of God” and who is now tasked with getting out the evangelical vote for Romney. In the mid-2000s, Reed was ensnared in the Jack Abramoff lobbying scandal. Reed was a longtime friend of Abramoff’s, and he took payments from Abramoff to lobby against certain American Indian casinos. Reed once ran a religious-themed anti-gambling campaign at the behest of an Abramoff-connected Native American tribe to try to prevent another tribe from opening a competitor casino. His current efforts for Romney are something of a political rehabilitation for Reed.

Reed is Romney’s best hope for rallying evangelical voters. The religious right is a sizable voting bloc: 26 percent of the electorate in 2008. Reed was credited with propelling the evangelical vote in the 2004 for George W. Bush and helping Bush beat Democratic Sen. John Kerry (D-Mass.). And Romney needs Reed’s kind of help. During the GOP primary, evangelicals tended to prefer Romney’s opponents Newt Gingrich and especially Rick Santorum, and over the summer, enthusiasm among evangelicals for Romney was noticeably lacking.

As the New York Times recently reported, the Faith and Freedom Coalition intends to spend between $10 million and $12 million this election cycle. FFC aims to mobilize 17 million right-leaning, religious voters it has compiled in a database using sophisticated microtargeting methods, Reed said, using phone calls and mailers. Reed’s master plan calls for more than 5,000 volunteers to make contact with millions of voters in person, with 25 million voter guides being distributed at 117,000 churches around the country before Election Day.

And this mailer is a piece of this ambitious endeavor. Accompanied by a donation solicitation, the Faith and Freedom Coalition direct-mail piece asks a series of leading, anti-Obama questions. Obamacare, House minority leader Nancy Pelosi (D-Calif.), Venezuela’s Hugo Chávez, and Cuba’s Fidel Castro all figure prominently in the missive. The most contentious question may be one comparing Obama’s policies to the threat of Nazi Germany and Japan during the second World War:

Another question refers to Obama’s “Communist beliefs,” while suggesting that the president has marched in step with Venezuela’s Chávez and Cuba’s Castro: 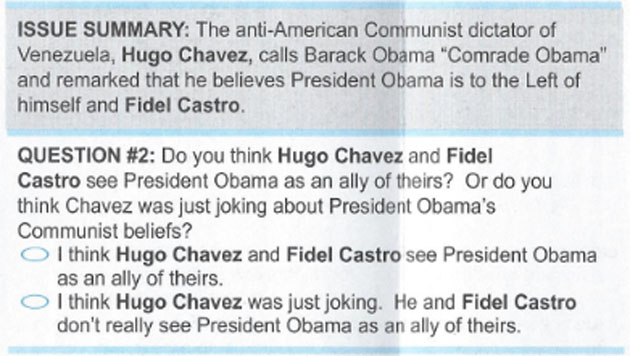 In fact, Obama and Chávez are far from friends (though Chávez did in July call Obama “a good guy”); nor are the two countries allies. The same goes for Castro and Cuba: A year ago, Castro called Obama “stupid,” and the United States continues to restrict trade and travel with Cuba. The obvious point here is to equate Obama as an extreme leftist. His “Communist beliefs” are stated as fact.

The mailer asks recipients if they’re registered to vote and if they’ll “solemnly pledge” to vote on November 6. It ends by requesting recipients to commit to “freedom-saving volunteer activities” like distributing FFC voter guides, staffing phone banks, and showing up at town halls to voice their opposition to “more radical Obama policies.”

Does Reed truly believe Obama is a communist whose policies threaten the United States as Nazi Germany once did? An FFC spokeswoman did not respond to a request for comment.