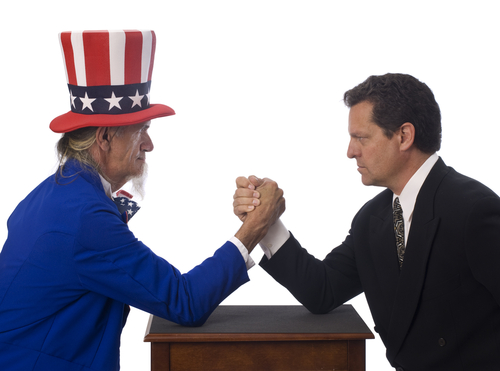 A new study picked up by Politico and National Journal this week contained findings that would make any DC journalist drool: About 57 percent of lobbyists who move through the revolving door from Capitol Hill into the private sector fail to adequately report their former government employment as mandated by the Lobbying Disclosure Act.

While that figure suggests that there’s some serious K Street law-breaking going on, it doesn’t tell the whole story. The study, published by Tim LaPira of James Madison University and H.F. Thomas III of the University of Texas at Austin, overlooked lobbyists who are filing their paperwork correctly, just not on forms the researchers reviewed.

One such lobbyist is William L. Ball, a former Secretary of the Navy under Ronald Reagan who worked for several years as a lobbyist for the Loeffler Group. I stumbled upon Ball when trying to find an example of a lobbyist in the wrong. The Center for Responsive Politics, which collects data on lobbyists, told me that Ball repeatedly failed to indicate his former government employment. But when I contacted Ball, he “respectfully” disagreed and sent me copies of his lobbying disclosure forms, which were filled out correctly.

So what was going on? Get ready to geek out. There are two ways that lobbyists can publicly disclose their previous work with the government under the Lobbying Disclosure Act: Through registration (LD-1) forms, which are filed for every new client they work for, or through the LD-2 forms that are filed quarterly. When I called the Senate Office of Public Records and and the House Legislative Resource Center, they both told me that a lobbyist only needs to fill out covered government employment on one of these forms.

So Ball was in the clear, for marking his Navy position on his registration. But what about all those other lobbyists supposedly breaking the law? A 2010 Government Accountability Office report looked at a sample of both disclosure forms and found that only about 9 percent of lobbyists did not properly report.

When I raised the issue with LaPira, one of the report’s researchers, he told me the study only looked at the LD-2 quarterly reports filed in the 2008 calendar year. (LD-2 reports are the only kind of form made available by CRP, which is where the researchers downloaded their data.) “If we were to look at [LD-1] registrations as well, we would expect the number of people who do not report to go down…I wouldn’t speculate how much exactly,” he said.

LaPira added that the researchers plan on doing further studies, but he “still feels that our evidence strongly suggests a transparency-policy failure” as prior government employment “should be disclosed again and again.”

So is this disclosure paperwork too confusing for researchers, lobbyists, and members of the public? “The ancient software used by Congress in LDA reporting is not exactly user friendly,” Ball wrote in an e-mail. Howard Marlowe, President of the All American League of Lobbyists, said that “Many in the lobbying profession don’t even know there is guidance on these things.”

Marlowe also said that under the Obama Administration, a number of lobbyists have deregistered, meaning they are not covered by the Lobbying Disclosure Act at all, but are getting away with “doing the same work.” Scott Amey, general counsel at the Project On Government Oversight, says everyone needs to stop complaining that the system is a burden and simply follow the law: “There is a distrust in government and politicians, and this system, albeit far from perfect, provides some assurances that we get to see who is pressuring the government to act.”