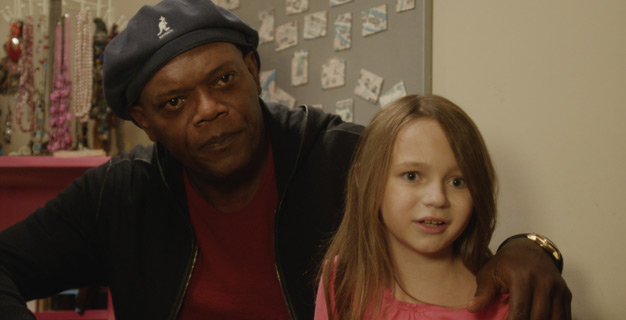 "Yes, Mitt Romney deserves to lose this election, and I hope..."Courtesy of <a href="http://www.jcer.info/about_us">JCER</a>

Hollywood megastar and snake-punching virtuoso Samuel L. Jackson plays the lead in a new ad from The Jewish Council for Education & Research (JCER), a liberal super-PAC. It is nearly four minutes long. It is unabashedly pro-Obama. It will be shown exclusively online. Oh, and it’s titled, “Wake the Fuck Up.”

Jackson, 63, narrates in a Seussian fashion (Whoville!), while paying homage to the audiobook he recorded for Adam Mansbach’s children’s book sendup Go the Fuck to Sleep. The clip consists primarily of the actor, clad in jeans and a black beret, magically appearing in houses and hurling obscenities and Democratic talking points at unsuspecting white suburbanites.

In one scene, for example, Jackson intones:

Sorry, my friend, but there’s no time to snore.
And out-of-touch millionaires just declared war.
On schools, the environment, unions, fair pay.
We’re all on our own if Romney has his way.
And he’s against safety nets, if you fall, tough luck.
So I strongly suggest that you wake the fuck up.

The civically engaged actor promptly rematerializes to shout at the disaffected teens who organized bake sales to support of Obama’s 2008 bid but have since lost interest:

STOP BULLSHITTIN’. GET OUT THERE AND SELL SOME CAKES AND COOKIES. NOOOWWWW!!!

The entire thing—it should go without saying—was done for the activist lulz. The new ad was scripted by Mansbach himself, and the Manhattan-based JCER is the same outfit that funded July’s viral clip featuring off-color comedienne Sarah Silverman offering to “scissor” GOP megadonor Sheldon Adelson for the sake of democracy. (Watch below.)

In 2008, before it was a super-PAC, JCER financed a social media campaign (also involving Silverman) that aimed to get young Jews out to vote for Obama. This year, the group has raised roughly $211,000 and spent roughly $113,000, with the vast majority of the cash coming from Alexander Soros, son of the billionaire and liberal bogeyman George Soros. Alexander’s brother Jonathan launched his own super-PAC this past summer—a sort of progressive anti-super-PAC super-PAC, if you will.

JCER’s politics are a natural fit for Jackson, who (like Questlove) campaigned for Obama in 2008, and pushes his political beliefs on Twitter:

If U had a direct line to Mitt, like U do to me, what would you say? Seeking knowledge not Vitriol!

Does a Moupfacca really need to clarify?! I’m a child of SEGREGATION! A BLACK POTUS! In my lifetime?!

And then there are the more extreme displays of his partisan convictions:

Just in case you live in a hole and need a refresher on who Samuel L. Jackson is and what he does (besides generate vast amounts of cash for Hollywood executives), here’s a classic (albeit disturbing) scene of him playing Jules, the intellectual hit man from Quentin Tarantino’s Pulp Fiction:

…and here he is going to town on some British thugs in Formula 51, while dressed in a kilt:

And last but not least, here’s Sarah Silverman offering to make torrid love to casino magnate Sheldon Adelson in exchange for his defection to the Democratic Party.