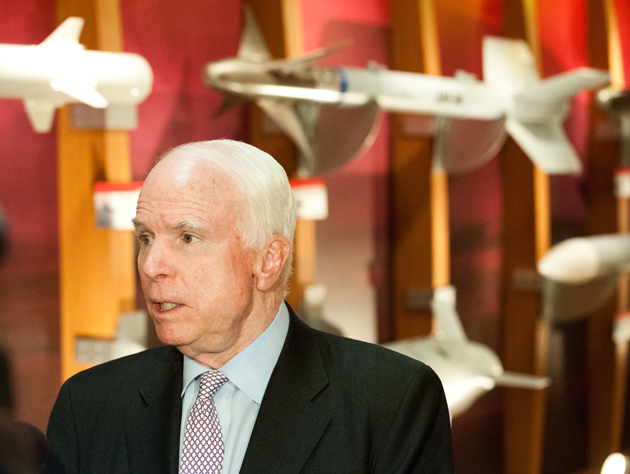 Sen. John McCain—Naval Academy class of 1958, Vietnam prisoner of war—has long enjoyed a reputation as a straight-talking protector of the troops. But yesterday, he joined 39 Republican colleagues in blocking a bipartisan bill that would have provided federal jobs for up to 20,000 out-of-work ex-service members—and in doing so, he went back on a verbal promise he made to a veteran weeks ago.

Mother Jones has obtained exclusive audio of an interview McCain conducted with military vet and citizen journalist Meg Lanker-Simons at the Republican National Convention in Tampa last month. In the exchange, McCain said getting vets back to work was job No. 1. (The jobless rate for former service members is up to 31 percent higher than for civilians.) “The fact is, it’s a national disgrace that veterans’ unemployment is 14 percent,” McCain said. “That’s a national disgrace. And we’ve got to try to find more ways and better ways to hire veterans. And that has got to be our highest priority.”

But last week, in floor remarks criticizing the now-dead Veterans Job Corps bill, McCain took a dramatically different stance. He declared that fiscal austerity trumped joblessness among former soldiers, sailors, airmen, and Marines. “We already have six veterans job-training programs, but what the heck? Let’s, ah, let’s have another one,” he said in a sarcastic tone:

McCain went to attack the bill as “a piece of legislation that somehow will enhance the majority leader’s ability to maintain his position as majority leader.” Perhaps that’s because few bills this congressional session had been as popular as this measure. It would have set up a corps “to match veterans with available jobs based on the skills the veterans acquired as members of the Armed Forces,” from homeland security to law enforcement to national parks. Not only that, it would have been cost-neutral: It was to be funded over the next decade with $1 billion of new revenue in the Department of Veterans Affairs—and of that, at least 95 percent had to go directly to the vets’ benefits, rather than administration.

Besides the entire Democratic caucus, the bill got votes from five Republican senators: Scott Brown (Mass.), Susan Collins (Maine), Dean Heller (Nev.), Lisa Murkowski (Alaska), and Olympia Snowe (Maine). But 58 senators out of 100 were not enough to overcome McCain and his colleagues, who filibustered and argued that the bill was election season politicking that still didn’t meet their budget standards.

Lanker-Simons, a Navy veteran and freelance reporter based in Laramie, Wyoming, provided Mother Jones with the tape of her interview with McCain after hearing his justification for blocking the Veterans Jobs Act. She’d corralled the senator at a GOP convention party for Got Your Six, a nonprofit campaign to help vets transition into civilian life. “Honestly, I’d just interviewed him as kind of a softball thing,” she says. But this week, she adds, “I saw that he had voted against [the bill], and then I replayed the interview, and I was like, ‘Holy shit!'” In the complete two minute clip (embedded below), McCain expressed faith that all senators could reach bipartisan agreement on caring for troubled former service members. Says Lanker-Simons: “It’s the exact opposite of his vote, basically.”

A spokesman for McCain sent Mother Jones a statement by the senator, noting, “While I support many of the items within this bill, and I am firmly committed to eliminating the unemployment crisis faced by our veterans, we cannot continue to add to our debt and deficit.” The statement continued:

Successful, common sense legislation requires bi-partisanship and compromise. Our returning heroes deserve nothing less. I am committed to working with my colleagues on both sides of the aisle to ensure that America’s veterans have every opportunity for a happy and successful life.

Mother Jones followed up, asking whether McCain now considers the deficit a higher priority than veterans unemployment, and what sort of compromise he’d support on joblessness, if not this one. The senator’s office did not respond.