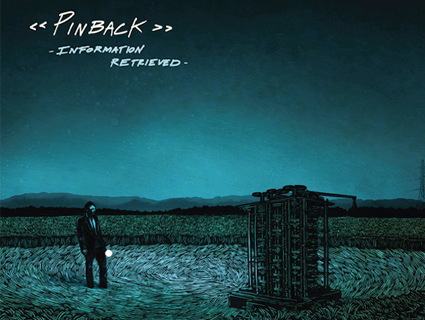 Just days before the release of Pinback’s fifth album, Information: Retrieved, on the Temporary Residence Ltd label, the website Pinback.com was still fully dedicated to the duo’s last release, Autumn of the Seraphs, which came out way back in 2007. “I heard there was plans for a new website. I don’t know what happened to them,” vocalist/guitarist Rob Crow, tells me nonchalantly during a Skype chat.

With an indie act as revered as San Diego’s Pinback—consisting of former roomates Crow and bassist Zach Smith (of Three-Mile Pilot fame), who began recording together in 1998—one might expect to encounter a full-on publicity blitz for the group’s first album in five years. But Pinback is a humble pair that has built its devoted following with a self-produced library of infectious and pleasantly mysterious music unaccompanied by a lot of hype and gimmicks. (That is, if you ignore the Pinback video game. Don’t get hooked.)

Information: Retrieved begins, as Pinback albums are apt to do, with a sonic call to arms: Here’s “Proceed to Memory.” Note how it builds from a single bass tone, then lifts and lifts and lifts, a reminder that Pinback has not abandoned its signature sound:

“Proceed to Memory,” Crow says, is “another in a long line of songs about mortality.” When I press him to tell me more, he says he “wasn’t prepared to get all…depressed.” He’s more willing, however, to talk about the inspiration for the single, “His Phase.” (Hint: It involves Zach and the band Rush.)

There’s an air of mystery infusing the new album, both in the music and in the accompanying artwork. Inside, you find artist Daniel Danger’s eerie line drawings of vintage radios, telephones, and zoetropes, as well as strips of 8mm film and newspaper clippings with headlines like “Local Pong Champion Complains of Visions.” It would appear that we’re being challenged to solve a puzzle. And indeed we are…

Pinback released two 7-inch vinyl records last year containing the tracks “Sherman” and “True North”—both of which appear on the new full-length—and also Danger’s artwork. Here’s Crow’s response when I ask how those singles relate to the new release:

When Crow isn’t busy recording, touring, and discussing album conspiracy theories with fans, you might find him sharing his taste for rare and unheard music via his podcasts. But they only come out occasionally. Crow may have no qualms about performing in front of a crowd, but the podcasts, he reveals, make him anxious. Listen:

He’s sticking with the music, anyway. After 14 years of recording and touring with Pinback, Crow says he aims to keep performing up “until his hands fall off,” although he should probably “be an EMT or marine biologist.” Listen:

If you’ve never listened to Pinback, Information: Retrieved is just as good a place to start as any. It’s a solid example of Pinback’s sound. And like the band’s other albums, it quickly grows on you. Maybe soon, you’ll even find it on their website. For the moment, though, shooting scary fish will simply have to suffice.