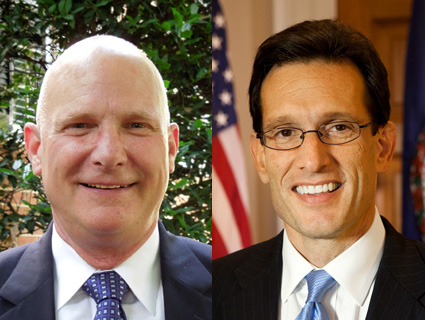 On September 17, the day Mitt Romney was outed for dismissing half the country as a hopeless waste of time at a high-dollar Florida fundraiser, Wayne Powell quietly slipped into Los Angeles for a fundraiser of his own. As it happened, Romney was in town too, trying to convince Latino voters he loved them despite his penchant for referring to undocumented immigrants as “illegal aliens,” his self-deportation proposal, and his cloying quip—from the same “47 percent” video—that his White House dreams would be made easier if he were Latino.

You could be forgiven for not having heard of Wayne Powell. Until Virginia’s 7th District Democratic Committee chose him by caucus to throw at Eric Cantor, the well-coiffed, sparkly toothed House majority leader who holds the district’s congressional seat, few had. To make Powell’s quest even more quixotic, the 7th District votes Republican so reflexively that the national Dems, including the party’s “Drive for 25” campaign to take back the House, have pretty much left Powell to fend for himself. Which is why Powell, a lawyer and decorated Army veteran, was in town with fellow political outsider Rob Zerban for a low-key fundraiser at the Pacific Palisades home of actress Barbara Bosson (Hill Street Blues, Murder One). Zerban is vying for Wisconsin’s 1st District House seat, whose incumbent is Paul Ryan—a man with higher aspirations, of course, but who is running for reelection as an insurance policy of sorts.

Both Democrats are long shots without national profiles who have nonetheless dared to take on some of the GOP’s most powerful incumbents. So while their Los Angeles visit received scant media attention, their presence was hardly insignificant to the hundred or so Angelenos who showed up to Bosson’s elegant abode at the urging of environmental activist Sara Nichols and several other ladies concerned with the way women’s reproductive rights are trending. Virginia, of course, has been at the forefront of creative assaults on Roe v. Wade, including proposals for mandatory transvaginal ultrasounds and red-tape redlining of abortion clinics. Last year, Ryan joined Rep. Todd “legitimate rape” Akin (R-Mo.) and about 50 more like-minded Republicans in cosponsoring an embryonic personhood bill.

“Cantor lacks empathy,” Powell says. “I think that’s crucial for public service—and why would anyone want to serve who doesn’t have empathy.”

Not to mention that Cantor and Ryan, along with House whip Kevin McCarthy (R-Calif.), are the young guns whose rise to power marked the ascendancy of a crass, Ayn Randian strain of conservatism whose makers-versus-takers rhetoric bears an uncanny resemblance to the language used by the ruthless Sanguinista sect of vampires on HBO’s True Blood. If Cantor and Ryan could be stopped or even slowed, went the evening’s sentiment, so might the noxious brand of Republicanism they represent.

The irony was not lost on those in attendance that Cantor’s and Ryan’s constituents are largely working-class white families with uncertain futures who often need a little help getting through lean times—in short, the kinds of people Romney and Ryan deride as takers. “They need the most help, and they are getting the least amount of help from what Cantor promotes, which appeals to the greediest among us,” Powell, a genial, bald man of 61 with a firm handshake and confident smile, tells me the day before his Palisades fundraiser.

We’re sitting at a Brentwood Village lunch spot on the type of beautiful day that can be a revelation to folks who spend their summers in the South. Powell takes a breath and looks around, as if the weather’s munificence were somehow incomprehensible, before continuing to assail his opponent. “Cantor lacks empathy. I think that’s crucial for public service—and why would anyone want to serve who doesn’t have empathy, and those who don’t, shouldn’t,” he says. “Cantor never talks about workers. Cantor started his career driving Mr. Bliley—[Republican Tom Bliley held Cantor’s seat from 1981 to 2001]—while I was defending my country in the military. He’s never worked.” (For the record, Cantor spent a number of years working for his father’s real estate firm before going into politics full time.)

That Powell and Zerban were in LA raising money for what seemed like increasingly less quixotic quests—Powell is the first challenger Cantor has agreed to debate in 10 years, and Zerban’s internal polling in September put him within single digits of Ryan—could underscore America’s waning infatuation with tea-party-style politics. Notably, Elizabeth Warren seems to be holding a slight edge over GOP incumbent Scott Brown in the race for his Massachusetts Senate seat. Democrat Tammy Baldwin has slipped past four-time Wisconsin Gov. Tommy Thompson in the bid to replace the retiring Sen. Herb Kohl. Virginia’s Tim Kaine is leading George “Macaca” Allen for the Senate seat being vacated by retiring Democrat Jim Webb. And, despite his widely panned debate performance, President Obama is still running ahead in key swing states such as Ohio, Virginia, and Wisconsin—although Florida has flipped to Romney, if you believe the model of New York Times forecasting guru Nate Silver. If Obama manages to recover from the first debate and put fresh heat on his rival, well, the one place trickle-down theory has proved effective is at polling stations.

But Powell is still decidedly an underdog. He lacks his rival’s professional polish, name recognition, and funds—having raised just over $730,000 to Cantor’s $6.3 million. Then again, as Powell likes to point out, he doesn’t share Cantor’s negatives. Polls from early in the campaign indicated that District 7 constituents have little love for the incumbent. According to Hickman Analytics, more voters there would like to replace Cantor than reelect him (43 percent to 41 percent), and they would prefer a pro-choice candidate to a pro-lifer by 68 percent to 23 percent. (Cantor has a 100 percent rating by the National Right to Life Committee; Powell is pro-choice.)

Cantor also earns failing grades from the Iraq and Afghanistan Veterans Association. This chafes at Powell, who retired in 2002 as a full Army colonel with 5 years of active duty and 25 more in the active reserves—he returned to duty after 9/11 to command an Army intelligence unit and now has a son serving in Afghanistan following tours in Iraq.

Powell’s working-class pedigree would seem to resonate with his district. His parents were solidly blue-collar—dad a welder, mom a baker—and he was born into the postwar glow of the greatest generation. “FDR arguably saved the world from fascism,” he says, perhaps overlooking Churchill in his enthusiasm. “I was always very patriotic growing up. I think duty, honor, and country is important, and it isn’t just a military thing,” Powell continues. But Cantor “has been totally feckless, mean-spirited, a self-absorbed obstructionist for 12 years. This is all about his power. The 7th District is just a platform.”

For his part, Powell is running on a platform of fiscal responsibility, economic justice—including the wealthy paying a greater share of taxes—women’s and gay’s rights, and rebuilding the middle class, such as it were. To hear him talk, Cantor’s biggest advantage is incumbency (the district has been in Republican hands since 1971) and name recognition, which can be nine-tenths of the game in a down-ballot race—Powell’s was a meager 17 percent when his campaign launched. He managed to raise his profile somewhat at the October 1 debate with Cantor, where he landed some well-aimed jabs and a subsequent segment on MSNBC’s The Ed Show. For what it’s worth, Powell was declared the debate winner by 86 percent of respondents to an informal, online poll conducted by the Richmond Times-Dispatch.

Small potatoes, perhaps. But sometimes, as they say in Hollywood, the script gets flipped. And Powell does have an expert script flipper in his corner: Dave “Mudcat” Saunders comes straight out of central casting if you’re looking for someone who can warm reflexively red voters to the idea of kicking a Democrat’s tires. Saunders is the so-called “rural advocate” who helped craft John Edward’s “two Americas” message before the candidate’s life and presidential campaign went off the rails. In 2006, Saunders helped Democrat Jim Webb snag a Virginia Senate seat from then-favorite-son George Allen. Four years earlier, he gave Sen. Mark Warner’s political fortunes a boost by guiding the erstwhile Connecticut Yankee to the governor’s office.

As the Romney fundraiser video suggested, conservative culture is itself steeped in class considerations.

“We‘ve gotta stop the sale of our government and this is a good place to start, right in the capital of the old dominion,” Saunders told me in the early days of Powell’s campaign. “We can’t walk with our tails between our legs, we gotta fight. Eric Cantor wanted a fight, by god he’s got one.” And in case you were wondering whether Saunders has lost any of the pugnacity he’s known for, he referred to Cantor as a “corporate prostitute.” In a recent interview with Politico, Saunders said he believes that the Reagan Democrats are ready to come home after a long hiatus aided and abetted by the Democrats’ inability to speak effectively across cultural divides. “Democrats go after class and Republicans go after culture,” he said. “And culture wins every time.”

Yet as the Romney fundraiser video suggested, the conservative culture surrounding the likes of Cantor and Ryan is itself steeped in class considerations, a belief in the sanctity of the so-called makers and the pathology of the so-called takers—or as Ann Romney refers to them: “you people.” The haves are deserving. The have-nots are irresponsible. It’s that simple.

At Bosson’s house, the well-heeled Westsiders listened politely as Powell and Zerban made their cases. Zerban spoke of growing up in a single-mom household “eating government cheese” to get by and eventually going to school on Pell grants and Stafford loans, the kinds of things Paul Ryan’s budget would do away with. Powell spoke of how that “awful socialist program called the GI Bill created the greatest middle class the world has known.”

Following the introductions, the crowd grilled both men for an hour or so. Of particular interest was whether they had the mettle to fight to the finish. Afterward, an audience keen on script-flipping opened up its checkbooks, satisfied that the pair were worth investing in.