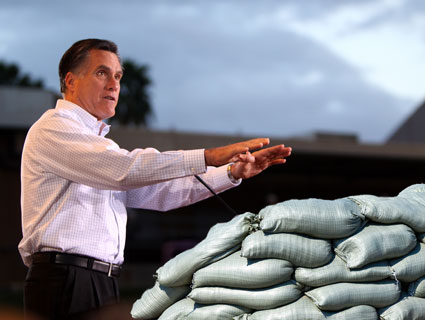 With Hurricane Sandy tearing up the eastern seaboard, Mitt Romney has been taking some knocks for his suggestion during a GOP primary debate in June 2011 that the Federal Emergency Management Agency should be shuttered in favor of letting the states and the private sector take responsibility for disaster response. Liberals criticized Romney’s comments as just another example of how he and Paul Ryan would tackle the national debt by cutting needed services. But when it comes to dealing with disasters, Romney’s view of the government’s role may be shaped by something other than Republican orthodoxy—his experience as a sixth-generation Mormon.

In 2007, Romney gave what was then known as his “Mormon speech,” in which he aimed to reassure voters that his faith would not prevent him from representing people of all religions. After the speech, I wrote a story lamenting that Romney hadn’t spoken more about some of his church’s strengths, most notably its ability to respond in a crisis, which in many cases has indeed been superior to efforts launched by the government, including during Hurricane Katrina. From that story:

The church’s self-reliance dogma extends beyond the average family basement to the community at large. For instance, it runs Bishop’s Storehouse Services, a network of regional warehouses that became well known during the Great Depression. When disaster strikes, church elders spring into action to distribute the goods through a welfare organization whose efficiency has been compared by some writers to the German Wehrmacht.

I grew up in Utah and have seen this phenomenon first hand. In the spring of 1983, after record levels of snow melted in the nearby mountains, City Creek flooded and threatened major parts of Salt Lake City. On a Sunday morning, as the water started to rise, the church quickly mobilized thousands of people to make sandbags to save critical parts of downtown (and, of course, the church infrastructure). We watched with amazement as the volunteers literally diverted the floodwater onto State Street, a major thoroughfare (where people later went fishing). The efforts were so successful that state officials estimated that they prevented 1,400 acres of land from flooding and $140 million in water damage.

More recently, the church went into high gear during Hurricane Katrina in a performance that put the federal government to shame. Before the storm made landfall, the LDS church in New Orleans safely evacuated all but about seven families out of about 2,500 local members, largely because the church had created an automated telephone emergency warning system that alerted all its members, instructing them to get out of town and telling them where to go.

Two days before the storm made landfall, while FEMA was floundering, the church dispatched 10 trucks full of tents, sleeping bags, tarps to cover wrecked roofs, bottled water, and 5-gallon drums of gas from its warehouses to New Orleans and other hard-hit areas. The supplies were distributed in an orderly fashion to people who desperately needed them.

Rather than downplay his religion, Mitt could spotlight the aspects of his church that reflect basic Republican values of self-sufficiency and the primacy of the private sector. After all, if disaster strikes, who will really care whether the Book of Mormon puts the Garden of Eden in Missouri? What matters is that if Romney ends up in the White House, his God will no doubt tell him to dispatch the trucks before the hurricane strikes.

The problem, of course, with Romney’s projecting Mormon Church experience onto federal disaster management policy is that the LDS Church is sui generis. Their admirable model for self-reliance and disaster aid works only because the church is a unique, well-oiled, and tightly networked organization with members who will mobilize on command, as they did when Salt Lake flooded in the 1980s. There’s no reason to believe, for example, that the state of Louisiana would have handled Hurricane Katrina any better if it had been left to its own devices.

Even in Utah, where Mormons have amply demonstrated their ability to respond to a crisis, the state has recognized that it can’t rely solely on volunteer efforts to protect its residents. The current governor, Gary Herbert, a Republican, has requested federal disaster aid for several state crises. Federal funds have helped shore up the state’s infrastructure to mitigate flooding, among other things, so there’s more between residents and potential flood waters than just the sandbags of the Saints. But whether a President Romney would come around to the view of his supporters in Utah is anyone’s guess.