At last night’s presidential debate on foreign policy, Mitt Romney repeated one of his signature foreign-policy talking points on Iran:

I’d make sure that [Iranian president Mahmoud] Ahmadinejad is indicted under the Genocide Convention. His words amount to genocide incitation. I would indict him for it. 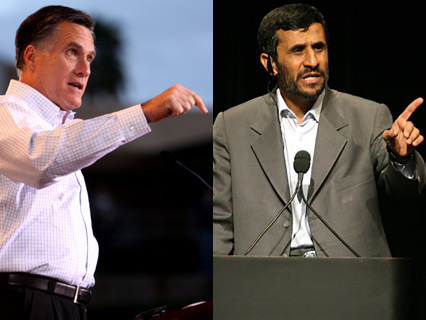 Romney has been saying this since at least the end of 2007. As I noted last year when he brought this up several times in the heat of the Republican primaries, Romney is wading into murky, if not downright implausible, territory here. When he talks about indicting Ahmadinejad, Romney is specifically referring to the the Iranian leader’s infamous applause line calling for Israel to “be wiped off the map.” That rhetoric was widely condemned when he first said it back in the Bush years. But unless a statement can be taken into direct evidence as proving premeditation and intent to perpetrate mass murder, it would be exceedingly difficult to bring charges under the Convention on the Prevention and Punishment of the Crime of Genocide against a foreign leader, let alone haul him before the International Criminal Court.

Elizabeth Blackney, an anti-genocide activist and author (and Romney supporter), questioned Romney’s plan when we talked about this last November: “There are so many layers to [Romney’s] argument that need to be explored [before any potential US support for an indictment] because the implications are very serious…US policy has been to not honor the International Criminal Court; we are not a signatory to the Rome Treaty. So is Romney signaling that he would recommend law enforcement under the [statute]… and fundamentally change American policy toward the ICC and the Genocide Convention? [The governor’s comment] was not very well thought out.”

Reactions following Monday night’s debate were similar: “And as the President of the United States, Romney wouldn’t have the power on his own to bring anyone up before the International Criminal Court [ICC]. But it’s one of those bits of posturing that nobody, not even his own supporters, actually believes,” writes The American Prospect‘s Paul Waldman.

After the debate, Romney campaign aides clarified Romney’s comment to TPM‘s Benjy Sarlin, suggesting that a Romney administration would support the “World Court” arresting and trying the Iranian president. (While the “World Court” is indeed a nickname for the UN’s International Court of Justice, campaign officials most likely meant the ICC, which actually prosecutes crimes against humanity and genocide.) Greg Sargent at the Washington Post was quick to point out that members of Romney’s own foreign policy advisory team, particularly John Bolton, cringe at the idea of American leadership deferring to international bodies like the ICC.

In his determination to project more toughness on Tehran during the final weeks of the election, Romney might do well to think of another—and less legally muddled—argument than “arraign Ahmadinejad now!”