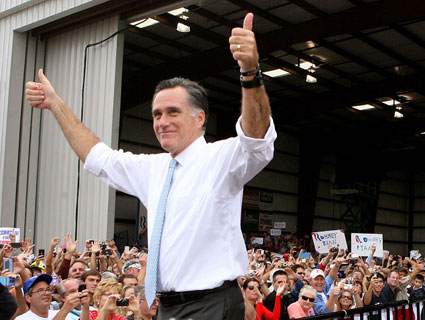 When Mitt Romney has come under fire for employing aggressive tax avoidance strategies that have reduced his federal tax rate to one lower than most middle-class Americans pay, his defenders have often pointed to his generous charitable donations as proof that he has contributed his fair share. The argument has never been especially compelling, given that a lot of his charitable contributions went to his own family foundation, which then gave money to such worthy causes as the Heritage Foundation or the George W. Bush library. But today Bloomberg Bloomberg added a new wrinkle to the story, reporting that Romney has taken advantage of a complicated—and now mostly outlawed—charitable trust to defer and avoid paying capital gains taxes on some of his earnings.

Using the Freedom of Information Act, Bloomberg smartly requested the tax returns of a charitable trust set up by Romney in 1996, which have never been publicly released. (The trust is separate from both the Romneys’ family trust and foundation.) The documents reportedly show that Romney used a loophole to essentially rent the tax-exempt status of a nonprofit—in this case, that of the Mormon church—to lower his tax rate while not actually giving much money to the charity itself. Bloomberg explains:

When individuals fund a charitable remainder unitrust, or “CRUT,” they defer capital gains taxes on any profit from the sale of the assets, and receive a small upfront charitable deduction and a stream of yearly cash payments. Like an individual retirement account, the trust allows money to grow tax deferred, while like an annuity it also pays Romney a steady income. After the funder’s death, the trust’s remaining assets go to a designated charity.

Congress restricted the loophole just a year after Romney set us his trust to require that at least 10 percent of the trust’s initial investment remain for the charity at the end of the trust’s life. The Romney trust was projected to leave 8 percent to the nonprofit, which would have made it illegal under the new law, but according to Bloomberg, existing trusts like Romney’s were grandfathered into the law.

Setting up the trust, worth between $750,000 and $1.25 million in 2001, enabled Romney to take an upfront deduction for his charitable donation to the trust, while also earning annual payments worth 8 percent of the trust’s assets. Unlike much of his own portfolio, Romney’s charitable trust investments have been very conservative. (It’s now just all cash.) As a result, according to Bloomberg, the trust earned only $48 last year, while paying out nearly $37,000 to the Romneys. Meanwhile, the principal, which goes to the charity upon Romney’s death, has been dwindling as a result of those payouts, down to $421,000 in 2011. According to Bloomberg:

The current investing strategy favors the Romneys over the charity because they get a guaranteed payout, said Michael Arlein, a trusts and estates lawyer at Patterson Belknap Webb & Tyler LLP.

If the CRUT maintains the same investing strategy, assets will continue to shrink, said Jerome M. Hesch, a tax and estate planning attorney at the law firm Carlton Fields. The trustee acted prudently in protecting against losses during a stock market decline, he said.

Nevertheless, “what’s going to go to charity is probably close to nothing,” Hesch said.

The Bloomberg story provides yet another example of Romney relying on every tax avoidance scheme in the book to shield his fortune—and in this case, using his church in the process. He should be glad this scoop is likely to got washed away in the hurricane coverage this week.