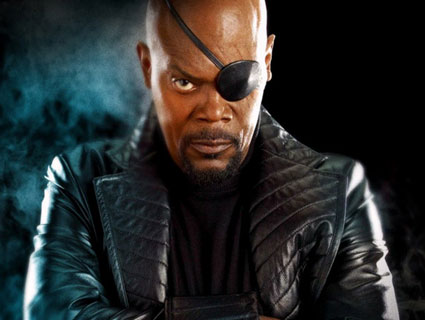 Perhaps anti-abortion activist Randall Terry should have known better than to pick a fight with Samuel L. Jackson. A guy whose last movie role was playing Nick Fury in the Avengers was probably not going to sit by quietly while Terry blanketed the airwaves with TV ads accusing Jackson of “carrying water for racists” and supporting “Black genocide” because of his support of President Obama. Yesterday, I explained how Jackson’s lawyers had been threatening TV stations and Terry himself with libel suits for airing the ads and posting them online. Apparently my post had some ripple effects.

Terry had created a website, www.uncletomjackson.com, to help broadcast his ads, along with another video he made of himself reciting a “faux Dr. Seuss” rhyme called “The New Uncle Tom.” Terry has long had trouble getting his videos in front of bigger audiences, presumably because they often feature graphic and gruesome footage of bloody fetuses. YouTube, apparently, has been reluctant to carry them. So his “Uncle Tom” series was hosted by the Media Research Center, a conservative nonprofit whose mission is to “neutral[ize] left-wing bias in the news media.” MRC was founded by L. Brent Bozell III, an abortion foe whose parents were pioneers in the anti-abortion movement, having led the first “Operation Rescue” protest in 1970, three years before Roe v. Wade. (Terry named his first anti-abortion group Operation Rescue.)

But after Mother Jones reported yesterday that Terry’s videos were technically political ads for his various campaigns (he’s running for both president of the United States and Congress in Florida), MRC pulled the plug on the videos. According to Terry, MRC explained that while it was sympathetic to his cause, as a nonprofit, it was barred from supporting candidates lest it lose its tax-exempt status. Terry, of course, sees MRC’s desire to follow the law as a huge betrayal and a sign of insufficient commitment to unborn babies. He blasted out a press release calling the MRC’s move a “disgrace” and asking Bozell and MRC to “come to their senses,” while bashing Jackson and the “Hollywood elite” for having “silenced dissent.” He wrote:

Terry’s outrage is understandable. Earlier this year, Terry succeeded in running aborted fetus ads during the Superbowl that were aired across the country, largely because the TV stations had no choice. (As a political candidate, Terry’s TV ads are protected by FCC rules as free speech; the stations have to run them.) MRCTV also hosted the ad videos on its website. They’re still there, with a very obvious link underneath to the “Terry for President” website, making MRC’s concerns about its nonprofit status seem fairly recent. If the Jackson “carrying water” ads could violate tax laws, certainly the Superbowl videos could, too. Perhaps the folks at MRC believe that they have much more to fear from Samuel L. Jackson than from the IRS. They could be right about that. A press contact for MRC did not respond to a request for comment.