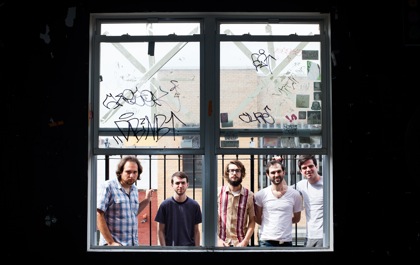 The New Jersey-based indie punk band Titus Andronicus has never shied away from big themes: It’s named after a Shakespearean tragedy, after all, and its last LP, The Monitor, was a Civil War concept album complete with period sound bites. In light of their tendencies towards the grandiose, then, the band’s third full-length, Local Business, is a surprisingly straightforward affair, an album of punk-ish rock without all the bombast—or at least, without any more bombast than you might expect from any young Jersey rockers, which is to say still quite a bit.

With “Ecce Homo,” the album’s first song, Titus would seem, if anything, to be upping the ante from the Civil War as metaphor to crucifixion—especially given its opening lines: “Okay I think by now we’ve established / Everything is inherently worthless / And there’s nothing in the universe / With any kind of objective purpose.” But the song’s hopefully earnest guitar is congruent with the stark lyrics, and it works simultaneously as a send-up of self-serious, Nietzsche-quoting, angst-ridden punks and a reification of the same—it’s both self-aware and earnest, and it’s all the better for it.

Likewise, on the rollicking, hipster-baiting “Still Life With Hot Deuce on Silver Platter,” singer Patrick Stickles yelps about himself and the “other relevant dudes” with an air that can best be described as facetious—which makes it a bit jarring when the tone suddenly takes a turn for the serious with “My Eating Disorder,” a wrenching song about Stickles’ struggles with what he’s described as “selective eating.” 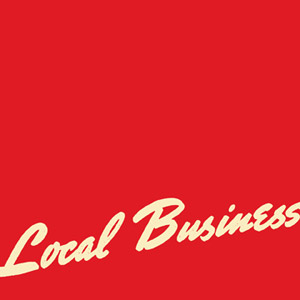 But despite the potential for plodding earnestness and occasional forays into glibness, the song packs a punch, especially when it gets to the heavy, portentous riffs that kick in around the five-minute mark, and the intensely repetitive refrain—”spit it out/spit it out.” Stickles is howling by the time he’s done, which makes for a good segue into the next song, “Titus Andronicus Vs. The Absurd Universe (3rd Round KO),” which consists of two minutes of Stickles screaming “I’m going insane” over furious guitars. “Upon Viewing Oregon’s Landscape With the Flood of Detritus” opens with the narrator watching a motorist die on the road and describing the road rage of the drivers stuck in the resulting traffic; an early chorus rousingly declares “built to last/built to last,” but by the end of the song, the refrain has changed to “thrown away/thrown away.”

For all its bleak content, Local Business is a remarkably peppy album, and at times even a light-hearted one. “Food Fight!” is a rambunctiously silly tune in the great punk tradition of fucking around; the lyrics never get more complex than the titular words, but harmonica and guitar solos round the track out. “Tried to Quit Smoking,” on the other hand, meanders through emotionally fraught terrain for six minutes before riffing off into bluesy territory for another four. That interplay between short bursts and long epics, basic chords and intricate solos, simple beats and complex melodies, repetitive phrases and clever witticisms, brash broadsides and angsty deep-dives makes for an album that’s much deeper than it initially seems. It reflects the band’s genuine appreciation for both punk and classic rock, a heritage equal parts the Boss and the Ramones. Titus Andronicus may have downsized the scope of its conceptual framework, but it’s still giving its all to the fight.

Click here to read our past interview with Patrick Stickles—and here to browse all of our music coverage.