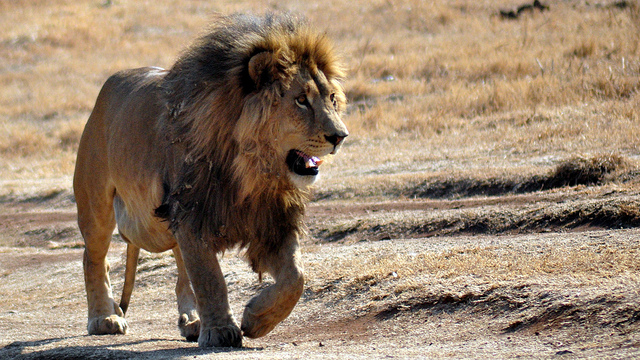 The U.S. Fish and Wildlife Service announced this week that African lions (Panthera leo leo) may deserve protected status under the Endangered Species Act. The decision, published November 27 in the Federal Register, comes in response to a petition (pdf) filed in March 2011 by five conservation groups that argued that American hunters pose a major threat to a species that is already in serious decline.

African lion populations have declined by about 50 percent over the past three decades. Current estimates put the total number of the big cats at fewer than 35,000.

Trophy hunting hardly poses the greatest threat to lions—which also suffer from habitat loss, the bushmeat trade, exotic diseases, conflict with livestock farmers and the often illegal trade in lion parts for use in traditional medicine, most of which is fueled by poaching and smuggling—but when you add up the numbers, hunters do have a significant impact on the big cats. According to data gathered for last year’s petition, more than 7,000 lion body parts were traded internationally between 1999 and 2008 for recreational trophy hunting purposes, representing more than 5,600 lions. The vast majority of those trophies were imported into the U.S. by, or on behalf of, American hunters.

If you dig deeper into those numbers, two more facts become clear. First, hunting is occurring at unsustainable levels in 16 of the 20 African countries in which lions can still be found. Second, hunting appears to be increasing. The number of trophies imported into the U.S. in 2008 was more than double that in 1999 and higher than in any other year in that decade, said Teresa Telecky, director of Humane Society International’s wildlife department, speaking at a press conference on November 26.

If African lions are added to the endangered species list—a process that could still take a few years—the listing would not prohibit Americans from traveling to Africa and hunting lions, but it would block hunters from bringing their trophies back into this country. The conservation groups say this disincentive would make hunting the animals less attractive.

Outside of trophy hunting, at least 2,715 body parts from wild lions—claws, skins and skulls—and even live animals were commercially traded during the same period, representing at least another 1,000 animals. The majority of the items were U.S.-bound. Such imports would no longer be allowed if lions were protected under the Endangered Species Act.

Hunting individual lions is only part of the problem—their deaths can create a domino effect in their prides. “When males that are part of a pride are killed, the pride becomes unstable and vulnerable to a takeover by a new male or coalition of males,” said Jeff Flocken, director of the Washington, D.C., office of the International Fund for Animal Welfare, during this week’s press conference. “If this happens, males from both sides can be mortally wounded. If the takeover is successful, cubs less than nine months of age will likely be killed by the new males, and the females can be injured or killed defending their cubs.”

Endangered Species Act protection would have a few other effects within the U.S. First, importation of live lions would no longer be allowed without specialized permits. Private ownership of lions would still be legal, but the sale and transport of lions across state lines would be severely restricted. As Flocken pointed out during the press conference, consumption of lions would also be illegal, which would block the import of lion bushmeat and the already controversial sale of lion burgers as well as any lion bone trade related to traditional medicines. Adam Roberts, executive vice president of Born Free USA, said there is little evidence of the latter in this country to date, though it is a big problem in Africa.

The Fish and Wildlife Service is now soliciting public comments on the proposal to add African lions to the endangered species list (to comment, go to regulations.gov and enter Docket No. FWS-R9-ES-2012-0025). After the 60-day comment window, the FWS will further review whether listing the cats is appropriate.