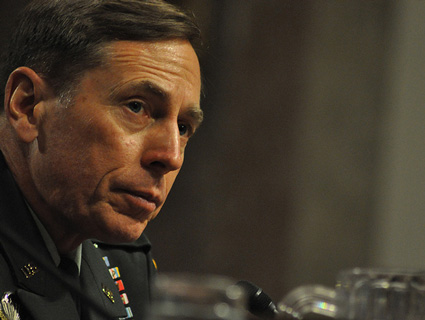 Few things have characterized the post-9/11 American world more than our worshipful embrace of our generals. They’ve become our heroes, our sports stars, and our celebrities all rolled into one. We can’t stop gushing about them. Even after his recent fall from grace, General David Petraeus was still being celebrated by CNN as the best American general since Dwight D. Eisenhower (and let’s not forget that Ike commanded the largest amphibious invasion in history and held a fractious coalition together in a total war against Nazi Germany). Before his fall from grace, Afghan War Commander General Stanley McChrystal was similarly lauded as one tough customer, a sort of superman-saint.

Petraeus and McChrystal crashed and burned for the same underlying reason: hubris. McChrystal became cocky and his staff contemptuous of civilian authority; Petraeus came to think he really could have it all, the supersecret job and the supersexy mistress. An ideal of selfless service devolved into self-indulgent preening in a wider American culture all-too-eager to raise its star generals into the pantheon of Caesars and Napoleons, and its troops into the halls of Valhalla.

The English used to say of American troops in World War II that they were “overpaid, oversexed, and over here.” Now we’re overhyped, oversold, and over there, wherever “there” might happen to be in a constantly shifting, perpetual war on terror.

In our particular drama, generals may well be the actors who strut and fret their hour upon the stage, but their directors are the national security complex and associated politicians, their producers the military-industrial complex’s corporate handlers, and their agents a war-junky media. And we, the audience in the cheap seats, must take some responsibility as well. Even when our military adventures spiral down after a promising opening week, the enthusiastic applause the American public has offered to our celebrity military adventurers and the lack of pressure on the politicians who choose to fund them only serve to keep bullets flying and troops dying.

It’s Not That Generals Suck, It’s That We Suck Up to Them

Recent scandals involving some of our top brass have one virtue: They’ve encouraged a smidgeon of debate on things military. The main problem isn’t that our generals suck, though one might indeed come to that conclusion after reading two recent high-profile articles. In the New York Times, Lucian Truscott IV dismissed General Petraeus and similar “strutting military peacocks” as phony heroes in phony wars. What we need, he suggested, is not “imitation generals” like Petraeus, but ruthless nail-spitters like his grandfather, General Lucian K. Truscott Jr., of World War II fame.

Tom Ricks, formerly the Washington Post’s chief military columnist and himself a fan of Petraeus, was more circumspect if no less critical. In a probing article in The Atlantic, based on his new book, The Generals, he argued that the US military has failed to reward virtuosity and punish deficiency. Combine an undiscriminating command structure that gives every general a gold star with their constant rotation in and out of command billets and you have a recipe for “a shocking degree of mediocrity” among the Army’s top leaders.

Such criticism comes as welcome relief after nearly a decade worth of hagiography that marched into our lives alongside Petraeus (once known sardonically among some Army colleagues as “King David” or in the media as the one man who could “save” Iraq) and McChrystal (a “one of a kind,” “battle-hardened” Spartan ascetic, according to a glowing 60 Minutes profile in September 2009). But it doesn’t go nearly far enough.

Generals behaving badly aren’t the heart of the problem, only a symptom of the rot. The recent peccadilloes of Petraeus et al. are a reminder that these men never were the unbesmirched “heroes” so many imagined them to be. They were always the product of a military-industrial complex deeply invested in war, abetted by a media as in bed with them as Paula Broadwell, and a cheerleading citizenry that came to worship all things military even as it went about its otherwise unwarlike business.

Pruning a few bad apples from the upper branches of the military tree is going to do little enough when the rot extends to root and branch. Required is more radical surgery if America is to avoid ongoing debilitating conflicts and the disintegration of our democracy.

Too Many Generals Spoil the Democracy

A simple first step toward radical surgery would certainly involve cutting the number of generals and admirals at least in half.

America’s military is astonishingly top heavy, with 945 generals and admirals on active duty as of March 2012. That’s one flag-rank officer for every 1,500 officers and enlisted personnel. With one general for every 1,000 airmen, the Air Force is the worst offender, but the Navy and Army aren’t far behind. For example, the Army has 10 active-duty divisions—and 109 major generals to command them. Between September 2001 and April 2011, the military actually added another 93 generals and admirals to its ranks (including 37 of the three- or four-star variety). The glut extends to the ranks of full colonel (or, in the Navy, captain). The Air Force has roughly 100 active-duty combat wings—and 3,712 colonels to command them. The Navy has 285 ships—and 3,335 captains to command them. Indeed, today’s Navy has nearly as many admirals (245 as of March 2012) as ships.

Any high-ranking officer worth his or her salt wants to command, but this glut has contributed to their rapid rotation in and out of command—five Afghan war commanders in five years, for instance—disrupting any hopes for command continuity. The situation also breeds cutthroat competition for prestige slots and allows patterns of me-first careerism to flourish.

Such a dynamic leads to mediocrity rather than excellence. Yet one area in which the brass does excel is fighting to preserve their bloated slots, despite regular efforts by civilian secretaries of defense to trim them.

Still, such pruning isn’t faintly enough. A 50 percent cut may seem unkind, but don’t spend your time worrying about demobbed generals queuing up for unemployment checks. Clutching their six-figure pensions, most of them would undoubtedly speed through the Pentagon’s golden revolving door onto the corporate boards of, or into consultancies with, various armaments manufacturers and influence peddlers, as 70 percent of three- and four-star retirees have in fact done in recent years.

Even a 50 percent cut would still leave approximately 470 active-duty generals and admirals to cheer on. Perhaps they should be formed into their own beribboned battalion and sent to war. Heck, the Spartans held the Persians off at Thermopylae with a mere 300 fighters. Nearly 500 pissed-off generals and admirals might just be the shock troops needed to “surge” again in Afghanistan.

Of Proconsuls, Imperators, and the End of Democracy

In Roman times, a proconsul was a military ruler of imperial territories, a man with privileges as sweeping as his powers. Today’s four-star generals and admirals—there are 38 of them—often have equivalent powers, and the perks to go with them. Executive jets on call. Large retinues. Personal servants. Private chefs.

Such power and privilege corrupts. It leads to General Petraeus, then head of Central Command, being escorted to a private party in Florida by a 28-cop motorcade. It leads to General William Ward, the head of US Africa Command, spending lavishly and so abusing his position that he was demoted and forced into retirement. It leads to generals being so disconnected from their troops that they think nothing of sending a trove of flirtatious emails to a starry-eyed socialite.

Disturbing as their personal behavior may be, the real problem is that America’s four-star proconsuls are far more powerful than our civilian ambassadors and foreign service members. Whether in Afghanistan, Africa, or Washington, the military controls the lion’s share of the money and resources. That, in turn, means its proconsuls end up dictating foreign policy based on a timeless golden rule: “he who has the gold makes the rules.”

Think of those proconsuls as the prodigal sons of a sprawling American empire. In their fiefdoms, vast sums of money can be squandered or simply go missing, as can vast quantities of weapons. Recall those pallets of hundred-dollar bills that magically disappeared in Iraq (to the tune of $18 billion). Or the magical disappearance of 190,000 AK-47s and pistols in Iraq in 2004 and 2005, representing 30 percent of the weapons the US provided to Iraqi security forces. Or the tens of thousands of assault rifles, machine guns, and rocket launchers provided to Afghan security forces that magically disappeared in 2009 and 2010.

Such scandals in US war zones should surprise no one. After all, noting that the Pentagon couldn’t account for $2.3 trillion (yes—that’s trillion) in spending, Secretary of Defense Donald Rumsfeld declared a war on waste. Good intentions, bad timing. The declaration came on September 10, 2001. A global war on terror followed, further engorging the military-industrial-homeland-security-intelligence complex with nearly a trillion dollars a year for the next decade, while it morphed into the blob that ate Washington.

Whether in money, personnel, or the prestige and power it commands, the Pentagon simply blows away the State Department and similar government agencies. Sheltered within cocoons of compliance (due to the constant stoking of America’s fears) and adulation (due to the widespread militarization of American culture), our proconsuls go unchallenged unless they behave very badly indeed.

Put simply, Americans need to stop genuflecting to our paper Caesars before we actually produce a real one, a man ruthless enough to cross the Rubicon (or the Potomac) and parlay total military adulation into the five stars of absolute political authority.

Unless we wish to salute our very own Imperator, we need to regain a healthy dose of skepticism, shared famously by our Founders, when it comes to evaluating our generals and our wars. Such skepticism may not stop generals and admirals from behaving badly, but it just might help us radically downsize an ever more militarized global mission and hew more closely to our democratic ideals.

Follow TomDispatch on Twitter @TomDispatch and join us on Facebook. Check out the newest Dispatch book, Nick Turse’s The Changing Face of Empire: Special Ops, Drones, Proxy Fighters, Secret Bases, and Cyberwarfare. To stay on top of important articles like these, sign up to receive the latest updates from TomDispatch.com here.