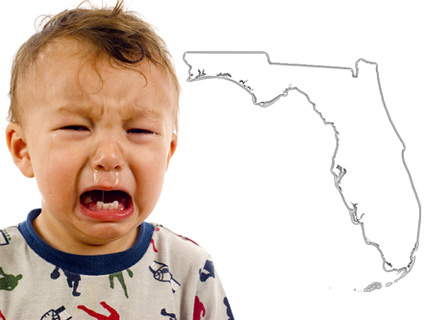 This morning in Cape Coral, Florida, 30-year-old Angela DiFranciesco loaded her infant son into his stroller and wheeled him over to her local polling place. It was raining when she arrived and a three-hour line snaked around the building. She gave up on voting that morning and went home.

“In the 1920s the right to vote was something that women stood for,” the part-time interior designer added. “And now I can’t even vote. I still don’t get to exercise that right.”

DiFranciesco is not alone. According to a database of voter complaints maintained by the Election Protection Coalition, many other Florida voters had to endure long lines today due to broken voting machines, shortages of ballots, or the inability of polling places to handle a crush of voters.

Voters reported long waits, up to seven hours in some cases, in a wide range of polling places, including in Orlando, Fort Meyers, Pine Island, Boca Raton, Pompano Beach, Palm Beach, Jacksonville, and parts of Miami-Dade and Broward Counties. A voter in St. James City reported a line of a half-mile long.

In many cases the waits seemed due to broken voting machines or a shortage of ballot scanners. Just a few recent examples: At 3:30 p.m. a voter in Cape Coral reported a seven-hour wait due to a broken voting machine. At 3:40 p.m., a voter in Hernando reported a four-hour wait at a polling place that had only one operable ballot scanner. A few minutes later, a voter in Pompano Beach reported a three-hour line at a polling place where the sole scanner was working only intermittently. Poll workers were putting some ballot pages in a bag next to the machine.

About a half hour after Florida homemaker Renee Goldstein showed up at her polling place in Broward County’s Pembroke Pines, elections officials ran out of ballots. She waited 2-and-a-half hours for new ones to arrive. During that time she noticed many people in line leaving. She says the polling place supervisor told her that he had requested more ballots at 11 a.m., but new ones did not arrive for another 7 hours. “Florida is really spelled Flori-DUH!,” she told me. “We were just hoping that we were not going to be hanging chad city again.”

The long lines in Florida, which began during early voting this weekend, result in part from a bill pushed through last year by Republican Gov. Rick Scott that drastically cut the state’s historically generous early voting period.