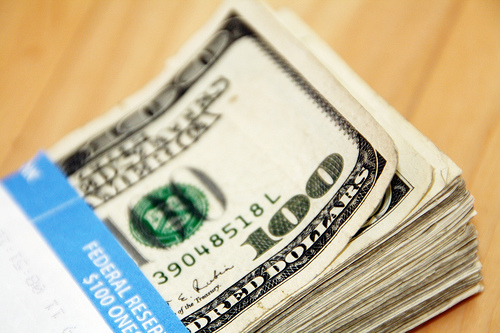 California’s elections watchdog has been fighting for weeks to unmask a secretive group that gave $11 million to defeat Proposition 30, Gov. Jerry Brown’s temporary tax increase to fund schools, and to pass Proposition 32, which would kneecap state labor unions. That battle ended Tuesday morning in something of a stalemate.

Americans for Responsible Leadership, the Arizona nonprofit that made the $11 million donation, had refused demands by California’s Fair Political Practices Commission to name its donors. So the state watchdog sued ARL, and judges agreed that ARL needed to fess up. ARL relented Tuesday, but its response is far from satisfying: ARL’s $11 million originally came from…another shadowy group called Americans for Job Security, which is run out of an office in Alexandria, Virginia. To complicate matters more, Americans for Job Security had funneled the $11 million through a third nonprofit, the Center to Protect Patient Rights, before it finally landed in ARL’s coffers.

Think of it as a daisy chain of secret money. The Fair Political Practices Commission described the scheme as the largest case of “campaign money laundering” in California’s history. Money laundering is a misdemeanor in California, according to FPPC’s chair Ann Ravel. (The state attorney general has the power to take action against ARL.) But the real source of the money, the individuals or corporations that first gave it, remains a mystery. Disclosure, in other words, is not transparency.

Here’s what we know about Americans for Job Security and the Center to Protect Patient Rights. Founded in 1997, AJS is a nonprofit currently run by a little-known Republican operative named Stephen DeMaura. The group runs ads backing GOP candidates and does not disclose its donors. In 2008, staff attorneys at the Federal Election Commission found “reason to believe” that AJS violated the law by not registering as a political committee, but the FEC’s three GOP commissioners blocked any action against the group.

The Center to Protect Patient Rights, as first revealed by the Center for Responsive Politics, is an ATM for conservative nonprofit groups backing Republican candidates at the state and federal levels. The group doled out $44 million in 2010 to the likes of Grover Norquist’s Americans for Tax Reform, the Club for Growth, and Americans for Prosperity. Those recipients all went on to slam Democrats and boost GOPers in the 2010 elections.

Who funds the Center to Protect Patient Rights is a mystery: As a 501(c)(4) nonprofit, the group does not name its donors. CPPR raked in $13.7 million in 2009, according to tax filings, but said in those same filings that it did not spend any money on fundraising in 2009.

CPPR is said to have ties to billionaires Charles and David Koch and their network of conservative donors. Sean Noble, who runs the group, spoke at a 2010 Koch donor conference; Politico has called Noble a “Koch operative” and the Los Angeles Times described him as a “key operative in the Kochs’ political activities.” However, no direct connection between CPPR, the Kochs, or their donor network has been established.

Even as it hailed forcing Americans for Responsible Leadership to reveal the trail of secrecy behind its $11 million donation, California’s Fair Political Practices Commission admitted the victory was bittersweet. “This case also demonstrates the need for reform to make sure true donors are disclosed and can’t hide behind innocuous committee names,” said Ann Ravel, the FPPC’s chair. “The people of California deserve better.”