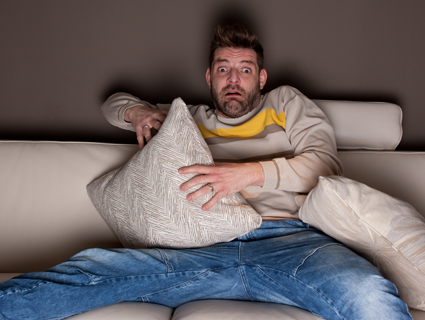 It’s not your imagination, or a bad trip: Your couch could be trying to kill you.

A new study in the journal Environmental Science and Technology found that 85 percent of the sofas researchers tested contained flame-retardant chemicals that have been identified as carcinogens and potential neurotoxins. The stats were even worse for newer couches—those made after 2005: 93 percent of those contained chemicals that were either confirmed toxic or had not yet been tested adequately enough to know if they pose a risk. The chemicals accounted for as much as 11 percent of the weight of the foam in the cushions, they found.

Manufacturers use 3.4 billion pounds of flame-retardant chemicals in couches, insulation, carpet padding, and electronics every year to, in theory, prevent them from catching fire. But studies have found that the chemicals aren’t actually effective and only make the fumes from fires more toxic.

“Petty much everyone in the country with a couch or a chair with foam have as much as a pound of a chemical like DDT or PCB in their home,” Dr. Arlene Blum, the executive director of the Green Science Policy Institute and a coauthor of the paper, told Mother Jones. “Most people think the government protects them, and that if something’s in their couch it must be safe.” (Blum’s flame retardant work was the subject of an excellent New York Times profile in September.)

Twenty-four percent of the sofas tested positive for chlorinated Tris, a carcinogen banned from children’s clothing back in the 1970s. While no longer in baby clothes, the chemical is still relatively common in mattresses and car seats and, as this study found, your couch. The researchers also found that some of the 102 couches they tested contained PentaBDE, a chemical that the United States phased out in 2004 because, as the EPA said, the chemicals are “persistent, bioaccumulative, and toxic to both humans and the environment.” But as the researchers note, most people keep their couches for an average of 15 years, meaning the older couches are still in many people’s homes.

The real problem is that the chemicals don’t stay in your couch. They end up in dust and air in your house, which is particularly problematic for children that crawl around on the floor. And for you, too, if you spend a lot of time on your couch or crawling around on your floor.

The researchers also note that it’s hard to tell if your couch contains these chemicals. If it has a label noting that it meets California’s standards for flammability of upholstered furniture—that it can resist bursting into flames for 12 seconds—then it most likely does have a bunch of chemicals in it. But 60 percent of the couches they tested that didn’t have those labels still contained the chemicals.

All of this raises interesting questions about what you should do with your couch. Blum tossed her chemical-laden furniture years ago, when she found out that she had 93 parts per million of toxic chemicals in her home, which was pretty high. After four years without the toxic furniture, she’s is now down to 3 parts per million. The Green Science Policy Institute’s primer on “cancer-free couches” is a useful place to start if you want to know more.