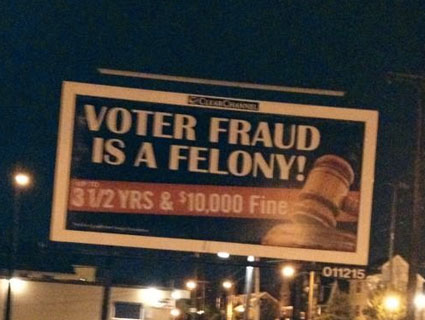 America has come a long way from the days of Jim Crow segregation, but our voting system is far from perfect, and even today there are organizations committed to preventing legitimate voters from excercising the franchise. Here are 10 of the most common legal and illegal paths to keeping Americans from the ballot box:

Voter caging is the process of sending mail to the addresses of registered voters with the intent of challenging their votes if the mail goes undelivered and the voter still shows up at the polls. It still happens, but the most famous instance occurred in 1981, when Republicans sent thousands of letters to black and Latino voters in New Jersey, hoping to block as many as possible of these likely Democratic voters from voting. As a result of that stunt, the Republican National Committee entered into a consent decree with the Democratic National Committee agreeing not to engage in voter caging unless a court says it’s okay. They leave it to third-party conservative groups now.

Dropping flyers with erroneous or deceptive information about voting may not be effective, according to voting law expert Rick Hasen, but it certainly happens a lot. Flyers in Virginia in 2008 told Democrats to vote on the wrong day, while flyers distributed in black neighborhoods in Milwaukee, Wisconsin, in 2004 told residents they couldn’t vote if anyone in their family had been convicted of a crime. Dirty tricksters are getting with the times, however—the 2008 election saw erreoneous election information distributed through emails to students at George Mason University. “Those things are very hard to investigate,” says Penda D. Hair, co-director of the voting rights group the Advancement Project. “They’re usually anonymous, so we don’t have good data on what the impact is on people.”

Many laws barring those convicted of crimes even after release emerged during Reconstruction as a way to disenfranchise newly freed blacks. Though defenders of such laws now justify them on race-neutral grounds, an estimated 2.2 million of the nearly 6 million Americans barred from voting because of prior felony convictions are black. Those are the kind of disenfranchisement numbers misleading flyers or robocalls can’t buy, which is exactly why newly elected Republican governors in Florida, Virginia and Iowa moved quickly to reinstate voting restrictions on the formerly incarcerated after taking office in 2010.

The impact of voter ID laws is still unclear, but the intent is not. Republicans pushing voter ID laws sometimes write them so as to exclude forms of ID carried by Democratic-leaning constituencies (like student ID) while allowing those more likely to be carried by Republican voters (gun licenses). The Brennan Center, a left-leaning legal advocacy group, estimates that as many as 11 percent of Americans lack government-issued photo ID. There’s no mystery among Republicans as to whom these individuals are more likely to vote for: A Pennsylvania state legislator openly bragged that the state’s voter ID law (since halted by the courts) would deliver the state to Mitt Romney. Though many of these laws have been delayed or struck down, some poll workers are still demanding government issued photo ID anyway.

States are supposed to keep the voter rolls current, but sometimes removals of dead or no longer valid voter registrations is undertaken in a reckless or partisan manner that can end up disenfranchising eligible voters. Just this year Florida tried to purge its rolls of alleged “noncitizens” on the rolls, only it turned out that many of them were perfectly eligible to vote. Colorado tried to do the same thing, with similar results. Coincidentally, flawed voter purges frequently seem to end up disenfranchising voters of color.

Republicans, convinced that Democrats only win elections through voter fraud, have taken to setting up billboards warning that “voter fraud is a felony” in swing states this year. Naturally, these billboards only seem to pop up in minority neighborhoods. It’s unclear how effective the billboards are at intimidating people out of voting, but there’s no mistaking who they’re aimed at. “They use a lot of threatening language to associate voting with a crime, that may just make people want to stay away,” says the Brennan Center’s Larry Norden. Norden says the billboards leave the impression that “if you go to the polls there might be somebody there to take you to jail or fine you.”

Republicans have developed an extensive network of poll watchers who think of themselves as protecting the integrity of the ballot box, but they’re really there to prevent people they think are Democrats from engaging in “voter fraud.” As Brentin Mock noted in his report on the conservative group True the Vote, the group’s national elections coordinator said that he wanted voters to feel like they are “driving and seeing the police following you.” These poll watchers can be misinformed about what’s required to be able to cast a ballot, which means eligible voters can be prevented from voting. “When these folks show up at the polling places,” Hair says, “our view is that it’s to scare people away just by being there.”

Early voting can cut down on long lines on Election Day and allow Americans who might not be able to get to the polls—maybe because they have jobs—cast a ballot. That sounds like a good thing, right? Well, not to the governments of Florida, Georgia, Ohio, Tennessee, and West Virginia, all of which cut down on early voting for 2012. Except for West Virginia, all of these states have GOP governors, and as Ari Berman noted in a piece for Rolling Stone, Ohio and Florida specifically “banned voting on the Sunday before the election—a day when black churches historically mobilize their constituents.”

After Republicans chalked up Barack Obama’s 2008 win to voter fraud engineered by the now-defunct community organizing group ACORN, GOP governors in Texas and Florida sought to cut down on registration drives by third-party groups. Florida’s restrictions were ultimately struck down in court, but the law had done its job: According to the Florida Times-Union, “the number of new Democrats registering in Florida has all but disappeared.” The irony? Last month, Florida announced it was investigating a longtime GOP activist for voter registration fraud. And if you can’t ban third-party voter registration groups, you can always destroy the voter registration forms of the opposite party, as one GOP activist is suspected of doing in Virginia.

Just kidding! As my colleague Kevin Drum has written, in-person voter fraud is so rare that eight years of the Bush administration ended in only a handful of prosecutions* and no evidence of an organized conspiracy to steal elections through in-person voter fraud, despite the fact that such conspiracies comprise the beginning and end of Republicans’ interest in voting rights matters. Absentee ballot fraud is more common, but voter ID laws wouldn’t stop it. Also, many Republicans vote absentee, and they’re not really interested in disenfranchising their own.

The good news? Many of the mostly GOP-supported laws seeking to restrict voting have been hard to defend in court. “A lot of the most restrictive laws we were worried about have been overturned through the referendum process or weakened by the courts,” Norden says. “The worst of those laws will not be in effect this November.”

*Clarification: None of the Bush voter fraud prosecutions were for voter impersonation—the kind that might be stopped by photo ID—but instead involved people who didn’t know they were ineligible, people who voted twice, or people who sold their votes.