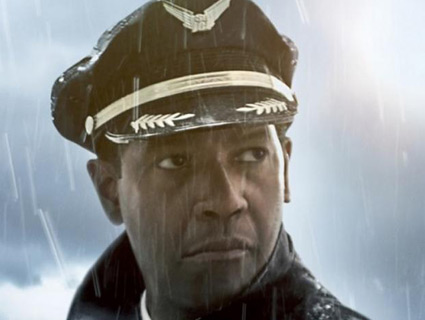 Going off of the trailer (embedded below)—and Denzel Washington’s recent output—you can’t be blamed for expecting Flight to be decidedly low-brow.

Given the available evidence, I was looking forward to a film in which an elegantly cocaine-impaired Denzel Washington flies a burning plane upside down while telling panicking passengers to “BE COOL!” for a solid two hours. (Maybe there’d be East German terrorists thrown into the mix in some way.) After all, American audiences have in recent years been fed a steady diet of Denzel Washington movies in which he efficiently dispatches one-dimensional henchmen and/or deals with imperiled trains barreling down the corridors of Tony Scott’s imagination.

Well, Tony Scott is gone (may he rest), and the vast majority of Flight does not take place aboard a burning, crashing commercial airliner. Instead, Robert Zemeckis (Back to the Future series, Forrest Gump, unwarranted Christmastime adaptations some of which star Steven Tyler) is directing, and the film is all talk and no needless killing.

And the result is a bruisingly beautiful character study that is only slightly less awesome than watching Denzel Washington drunkenly pilot aircraft upside-down for two straight hours.

In this movie, Washington plays the booze-burdened Whip Whitaker. His plane—with over a hundred souls on board—crash lands into a small church near Atlanta, Georgia. During the nosedive, Whip “inverts” the airplane in an extraordinary maneuver that saves almost everyone aboard. It just so happens that Whip had cocaine and vodka pumping through his veins during the flight. And so begins the unfolding of moral and legal consequences.

Flight is packed with smart acting and engrossing dialogue (courtesy of John Gatins), with scene after scene of quietly wrenching drama that cuts just as much as it subverts expectations, and turns devastating as swiftly as it does searingly funny. The acting is uniformly excellent, with special note reserved for English actress Kelly Reilly, who plays reformed junkie Nicole Maggen (Whip and Nicole meet by chance and form a surprising, tender relationship). Washington chalks up another towering lead performance to his name: a “hero” living a life of very loud desperation, who is suddenly shoved into the national spotlight and under the microscope of a federal investigation. The film is further boosted by the fact that the crash sequence—executed with a visceral and bleak visual poetry—is most definitely in the running for cinematic Scene Of The Year.

The story sacrifices some of its wallop in its final minutes with a conclusion that wraps things up a bit too cozily for comfort. Otherwise, Zemeckis’ examination of Whip’s downward spiral is stunningly good. (There’s a Piers Morgan cameo, too, if that does anything for you.)

All in all, Flight is one of the year’s finest films. Check out its sweet trailer:

Flight gets a wide release on Friday, November 2. The film is rated R for drug and alcohol abuse, language, sexuality/nudity and an intense action sequence. Click here for local showtimes and tickets.