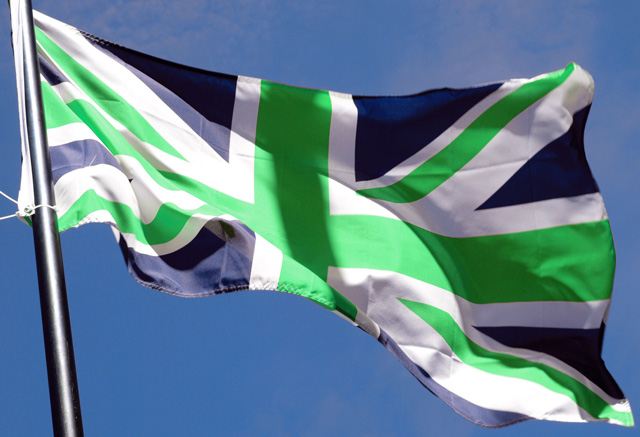 There’s a reason that American environmentalists might be green with envy this week: The Brits are racking up some notable environmental karma.

While the mere utterance of the words “climate change” in the US gets cheered by climate journos like me (and jeered by politicians still struggling with the science), the UK this week released a comprehensive (if complicated and controversial) new energy bill that triples subsidies for non-carbon energy, and opened a new green bank that will rush cash to alternative energy projects. All this against the backdrop of baby-stepping Doha talks, and the four-year anniversary of the UK’s historic Climate Change Act… and the Brits appear to be glowing a deeper shade of green.

Here are four ways in which Britannia rules the waves (and the wind, and the sun…).

US journalists hoping to penetrate the polarized world of climate reporting with fact can find a friend this week in Lord Justice Brian Leveson, the head of a wide-ranging inquiry into the UK’s media practices. While phone-hacking and other press malarky takes up the majority of the near-2000-page Leveson report, a small part looks at “false balance”, the idea that too much air time is given to minority opinions in the misguided pursuit of both sides of the story.

Leveson argues that “further consideration should be given to the need to provide balanced reporting without giving unjustified credence to minority views,” and sites a specific example: The Daily Express’s article 100 reasons why global warming is natural which Leveson says “resulted in a misleading and inaccurate piece of science reporting.” (Hat tip to The Carbon Brief blog, which has a terrific round up of all the mentions of science journalism from the sprawling report).

Leveson argues that any future press regulator should set out strict science reporting guidelines [PDF]. Worth a read. The one I like the most: “When reporting a link between two things, indicate whether or not there is evidence that one causes the other.”

UK’s renewable energy industry is mostly hailing a deal that will see more than £7.5 billion invested in non-carbon energy generation by 2020. RenewableUK, the leading trade association for wind, wave and tidal energy, predicts a (cough) windfall of jobs and investment: 88,000 jobs in the sector they represent by 2021.

But that’s the icing on a cake some groups are having difficulty swallowing for other reasons. Most notably, the new energy bill puts off making any carbon reduction decisions for the power sector until after the next election—a kind of “fiscal cliff” for the low-carbon economy. Friends of the Earth has called it a “reckless dash for gas” that has “banged the final nail in the coffin of Cameron’s pledge to lead the greenest government ever.” Despite Energy Secretary Ed Davey’s assurances to the contrary, the government has been accused of shoveling the cost burden to the consumers while exempting big, energy-intensive industries.

The £3 billion bank that opened this week will invest in green energy projects. Its first project will generate energy from waste through anaerobic digesters. The bank is hoping to attract a further £15 billion of private investment by 2015. Green groups have welcomed the bank, but say it should be able to borrow money above and beyond its stipulated £3 billion budget so it can start forking out larger amounts of cash right away.

While the US watches tumbleweeds, the UK is cueing confetti: this week marks four years since the UK introduced the Climate Change Act, a world-first that included legally binding targets to cut greenhouse gas emissions by at least 34 percent by 2020. And while most commentators foreground their ambivalence about how far the UK has come, at least they are not scrambling for ways to circumvent their legislature in the hope of securing any kind of climate action. And for that, we say Happy Birthday.