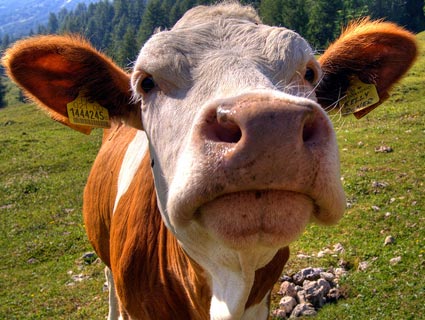 From a tainted water supply in Wyoming to toxic air pollution in Colorado, there are concerns aplenty about the public health effects of hydraulic fracturing. While many communities investigate what we drink and breathe for answers, one new report from The Nation and the Food & Environment Reporting Network highlights a key yet overlooked complication—fracking chemicals could affect our food.

For the cover story in the magazine’s December issue, journalist and author Elizabeth Royte visited a North Dakotan cattle farmer living smack in the middle of the Bakken oil boom. The rancher, Jacki Schilke, decided to largely stop selling her cows for Black Angus beef after several died or started displaying mysterious symptoms, like rapid weight loss or tails that would simply drop off. Schilke, Royte writes, is surrounded by 32 fracked oil and gas wells within three miles of her 160-acre ranch. The author continues:

Ambient air testing by a certified environmental consultant detected elevated levels of benzene, methane, chloroform, butane, propane, toluene and xylene—compounds associated with drilling and fracking, and also with cancers, birth defects and organ damage. Her well tested high for sulfates, chromium, chloride and strontium; her blood tested positive for acetone, plus the heavy metals arsenic (linked with skin lesions, cancers and cardiovascular disease) and germanium (linked with muscle weakness and skin rashes). Both she and her husband, who works in oilfield services, have recently lost crowns and fillings from their teeth; tooth loss is associated with radiation poisoning and high selenium levels, also found in the Schilkes’ water.

According to Royte, the state’s health and agriculture officials told Schilke this wasn’t cause for concern. Another state air quality official told OnEarth magazine that in investigating Schilke’s health complaint, tests never revealed pollutants above “normal background” levels. Of course, it doesn’t help Schilke that there’s scarce research into the connection between food and fracking. Earlier this year, an Ithaca veterinarian and Cornell professor published a peer-reviewed study (the first of its kind) examining health problems in animals from 24 farms across six drilling states. The authors, Michelle Bamberger and Robert Oswald, looked at several frack-heavy areas, and found that animals exposed to chemicals in fracking fluid or wastewater often died, couldn’t reproduce, or had offspring with birth defects.

Still, much remains unknown—or disputed. Critics accuse the Cornell study of being un-scientific because of its use of anonymous sources, and also because the researchers didn’t test the effects of specific chemicals on cows directly; instead, the authors relied on events they didn’t control. Of course, controlled testing of the direct effects of particular chemicals is made all the more difficult because of legislative loopholes that allow companies to keep the identities and concentrations of fracking chemicals guarded. Bamberger and Oswald, for their part, attributed the report’s reliance on anonymity to industry non-disclosure agreements.

The potential fracking-food connection is especially important to consider as New York’s heavily delayed decision on how to regulate fracking approaches. In her interviews with concerned upstate New York farmers and Brooklyn gourmands, Royte shows how citizens’ taste for locavore beef, dairy, and other meat products could come into direct conflict with a landscape compromised by drilling. If Governor Cuomo does decide to end the state’s fracking moratorium, that could be a lot of ‘splaining to do for New York’s DIY-or-die foodie communities.