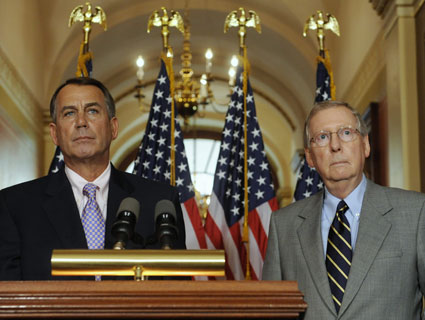 There’s an old Mormon prophecy—of questionable origin and not accepted as official doctrine by the church—that in the latter days, when the US Constitution is hanging “like a thread,” a Mormon will gallop in on a white horse to save the day, and Mormons will take the reins of the US government. That prophecy—legitimate or not—was not fulfilled this year. The white horse, wherever it may be, remains riderless. And such is the state of the Republican Party. After voters rebuked Mitt Romney—and a variety of Republican Senate candidates and a handful of GOP House members—the party, once again, is leaderless.

Political parties often end up in this position after losing a presidential election. Following Al Gore’s (kind of) defeat in 2000, there was no central figure in the Democratic Party. (Hillary Clinton, a newbie senator at that point, was keeping her head down.) Leaders, though, do eventually arise, if only because presidential elections occur every four years and some guy or gal has to be nominated as the party’s standard-bearer.

Yet this time, it seems the Republicans may especially suffer from a vacuum at the top. The party remains caught in the gravitational pull of the tea party (which might have become something of a political black hole). Though not all Republicans see it this way, the tea partiers pulled Romney and the GOP so far to the right that an opening was created for President Barack Obama. In the Obama campaign’s final conference call with reporters—held two days after the election—strategists David Axelrod and David Plouffe both emphasized one piece of exit-polling data: Obama won 56 percent of the voters who had identified themselves as “moderate.” That suggests that the tea-party-fueled rightward lurch of Romney and the GOP took them out of contention.

At the grassroots, there doesn’t appear to be an organized countervailing force to the tea party. And without a strong counter at the top of the party, it may be tough for Republicans to escape the clutches of their diehard ideologues. Can either House speaker John Boehner or Senate GOP leader Mitch McConnell grab the steering wheel of the bus and guide it off the shoulder and back on the road? Last year, during the debt-ceiling showdown, Boehner was unable to tame the passions of the tea partiers within his caucus. He had to dump the possible grand bargain deal because he could not convince his own members to vote for it. And neither Boehner nor McConnell possess the PR skills and communications talents to function as stellar emissaries to the general public for the GOP in the wake of this defeat. (An intriguing sideshow for Washington observers will be the relationship between McConnell and Boehner, as the two contend with Obama’s efforts to avoid the so-called fiscal cliff. Will McConnell, once again, upstage Boehner as the congressional Republicans’ adult-in-the-room?)

As for Rep. Paul Ryan (R-Wis.), the defeated veep nominee, the conventional verdict is that he acquitted himself well during the campaign—mainly by not doing anything notably foolish—and is well positioned to pursue the top of the ticket in 2016. That may be so. But as an Ayn Rand-loving, tax-cuts-for-the-rich-defending, safety-net-tearing social conservative who accepts no exceptions for abortion, Ryan just saw all his core policies repudiated by voters across the land. He may be the favorite of disappointed tea party voters. Yet he’s hardly in a spot where he can credibly speak for his party on these matters.

There are a slew of potential 2016 wannabes in the wings: Marco Rubio, Chris Christie, Bobby Jindal, John Thune, Jeb Bush, and others. None are preeminent figures that have the standing that, say, Hillary Clinton held heading toward 2008. (And look what happened to her.) With Ryan, they will be vying for attention in a wide-open field. There is no GOP candidate who will dominate the landscape.

So look around—who else is there? Karl Rove? He has lost his credibility as a strategist, a pundit, and—this takes some doing—a Fox News contributor. (Though his $300 million effort flopped in terms of electing Republican candidates, it did skew the playing field, rendering it harder for Obama and the Democrats to achieve their wins, and likely suppressed their margins of victory.)

What about Rush Limbaugh? Democrats in recent years have delighted in pointing to him, Glenn Beck, and Sarah Palin (remember her?) as the true leaders of the GOP. Well, two of that threesome are out of the running. But Limbaugh and Limbaughettes, such as Sean Hannity, will still be shrieking ideological marching orders (and peddling assorted right-wing conspiracy theories) to the rank and file of the party. One question is whether their influence will diminish. After all, their alternative reality (and their fundamental assumptions about the United States) took a severe hit on November 6. But will they or, more importantly, their followers notice?

In the past few days, there’s been the usual chattering about the inevitable civil war in the party. Some GOPers will say Romney was not severely conservative enough. Others will argue that his alienation of Latino voters and the party’s embrace of harsh right-wing stances on social issues (highlighted by a few dumb remarks about rape) have landed it out of the nation’s shifting mainstream. Some will point to Romney’s fecklessness as a candidate and his mismanaged campaigned as the main reasons for failure. It could get ugly. Such tussles, however, are common, and modern history shows they don’t tend to hinder parties. The Republicans were pronounced dead after Obama’s 2008 victory, and they came roaring back two years later.

Yet this is a difficult time for the Republicans to have a fierce, soul-searching debate. With the Bush tax cuts set to expire, the automatic budget cuts (negotiated during last year’s debt-ceiling fiasco) scheduled to kick in, and another debt ceiling clash looming—while the fragile US economy continues to recover at a sluggish pace within an anemic global economy—the Republicans have a set of challenging decisions to make soon. Will they resume their hostage-taking ways? Or might they actually respond in good faith to Obama’s call for compromise? Can Boehner this time cut a deal with the president without fearing a tea party mutiny (led by Rep. Eric Cantor (R-Va.), the House majority leader, or some other Jacobin)? If Boehner and McConnell do figure out a way to strike an agreement without blowing up their respective GOP caucuses, can they sell it to the grassroots? Or will they confront a Limbaugh-led rebellion that one or more of the 2016ers will seek to exploit? Will anyone in the GOP listen to Rove if he advises his fellow Republicans to reach an accord with Obama on comprehensive immigration reform?

Without strong leadership at the top, the Republican Party will find it rather arduous to sort out these issues and resolve (or paper over) its internal conflicts. As the dust continues to settle, there is no white horse or rider on the horizon.