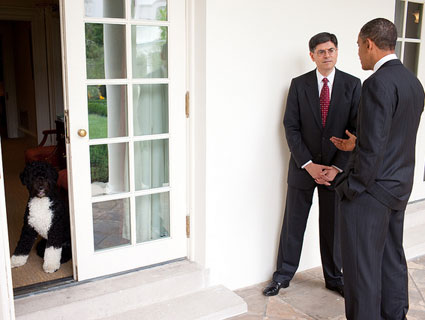 With the 2012 campaign almost a distant memory, President Barack Obama has a long to-do list that includes replacing key members of his cabinet—and also, unexpectedly, a CIA director. Secretary of State Hillary Clinton has said she’ll be leaving Foggy Bottom. Defense Secretary Leon Panetta will probably soon bug out. And Treasury Secretary Timothy Geithner, who made a half-hearted move in 2011 to depart but was persuaded by Obama to remain, will cash in his chips once Fiscalgeddon has passed. All of this is causing plenty of high-powered Washington scuffling, as various capital city players jockey for the plum posts. One potential looming showdown has pitted Erskine Bowles, a White House chief of staff during the Clinton years and the co-chairman of the Simpson-Bowles deficit reduction commission, versus Jack Lew, the current White House chief of staff who was Obama’s budget director before that, for the privilege of succeeding Geithner.

On Thursday, Bowles told CNBC off-air that he would not be succeeding Geithner, but it was unclear how definitive his statement was. Had he merely been guessing that Obama won’t select him? Had he been informed by the White House he was no longer in contention? Had he taken himself out of the running? Should Washington handicappers really strike him from the card?

Obama’s choice for Treasury secretary is obviously important. Whomever he selects will loyally advance Obama’s policies and decisions, but the next Treasury secretary will be a critical player in managing (and defusing) the various fiscal challenges that will continue to confront gridlocked Washington, even after the so-called fiscal cliff is leveled (assuming it is): deficit reduction, budget cuts, tax cuts, the not-over mortgage crisis, and the debt ceiling. Once he skedaddles, Geithner will leave behind a mixed legacy, whatever happens with said cliff (which really isn’t a cliff.) At the start of Obama’s first term, Geithner was a lousy messenger for administration mortgage assistance programs that did not work as promised, and he was widely regarded as a foe of consumer populist Elizabeth Warren and opposed to vigorous regulation of Wall Street beyond the compromise provisions of the Dodd-Frank legislation. But Geithner, often an advocate of prioritizing deficit reduction over job creation programs, also was a fierce opponent of the George W. Bush tax cuts for the well heeled, and urged Obama to strike a tough stance during negotiations with the hostage-taking Republicans of Capitol Hill.

The next Treasury secretary will need to be a savvy negotiator, and Lew has (had?) an edge in this category over Bowles. Both he and Bowles are veterans of the budget dogfights of the Clinton era, when Lew was the White House budget director, Bowles was managing the White House, and President Bill Clinton managed to vanquish the Republican revolutionaries led by firebrand Newt Gingrich. But Lew has more recent experience in the trenches.

During the budget clash between Obama and the House Republicans last year, Lew craftily outfoxed the Rs. At the start of the talks, Lew told Obama that if the president could hold the cuts to $50 billion or less—the tea partiers were demanding $100 billion—Lew could exploit his deep knowledge of federal budgeting to structure the reductions so the impacts would not be severe and Obama’s favorite projects, including Head Start and education programs, would be protected. And that’s precisely what he did. The final deal was $38.5 billion in budget cuts that would yield only $352 million in reduced outlays in 2011 (which would not noticeably affect economic demand at a time of slow growth) and $20-$25 billion in savings over the following five years, much of that coming from programs that might not actually spend all the money appropriated to them. When the dust settled, the tea party Republicans were enraged, believing, with cause, that Lew had snookered them. Lew’s performance was an impressive showing of number-crunching acumen and sly negotiating. But this may lead to one potential drawback: Tea party Republicans will be rather suspicious of future deals crafted by Lew.

Lew, who as White House chief of staff has won much praise from colleagues, has another advantage over Bowles: better standing within his own party. If Obama succeeds in trading entitlement reforms for Republican concessions on revenues, he will have to sell such a deal to congressional Democrats and contend with left-of-center grousing. Tapping Bowles certainly wouldn’t help on that front. This past campaign, Bowles joined with former GOP Sen. Alan Simpson (who co-chaired their deficit reduction commission) to endorse two House Republican candidates over Democrats in tight races. In New Hampshire, the pair backed GOP Rep. Charlie Bass, who had supported a budget based on the Simpson-Bowles proposal and who was running against Democrat Ann McLane Kuster, who had defeated Bass in 2006 only to lose to him narrowly in 2010. In Rhode Island, Bowles and Simpson gave their seal of approval to Republican Brendan Doherty, who was challenging Democratic Rep. David Cicilline, an openly gay legislator. Both Bass and Doherty lost, but congressional Democrats are not eager to forgive Bowles his apostasy. A Bowles nomination, a senior House Democratic staffer says, “would cause an uproar among congressional Democrats, and the White House is aware. He endorsed Republican candidates against some of our vulnerable people…[and this has caused] extremely bad feelings over here.”

During the budget and debt ceiling throw-downs of 2011, Lew and other members of Obama’s economic team often ticked off their Democratic comrades on the Hill, frequently because the legislators suspected the White House was negotiating with the Republicans behind their backs and not fully informing the Democrats of what was transpiring (which at times was true). In one memorable incident, Lew and White House aides David Plouffe and Gene Sperling met with Senate Democrats, and when Sen. Al Franken didn’t receive a sufficient reply to a question about the status of the budget talks between the president and House Republicans, he shouted at Sperling, “Give me a goddamn answer. Just give me a fucking answer.”

Yet Lew, who began his career as a policy adviser for House Speaker Tip O’Neill, shares a stronger ideological bond with the liberal Democrats of Capitol Hill than does Bowles. Before joining the Obama administration, he briefly served on the board of the Center on Budget and Policy Priorities, one of the most prominent progressive policy shops in Washington. “We had worked with him on many issues when he served with Speaker O’Neill in the 1980s and when he was director of [the Office of Management and Budget] in the late 1990s,” says Robert Greenstein, the president of the center. “I regard him as one of the most outstanding people we’ve ever worked with.” And during the 2011 budget tussles with the tea party Republicans, Lew demonstrated he was a budget-dissecting wonk who cared passionately about policy outcomes. At one point in the final negotiations for the debt ceiling accord, when Republicans on a conference call with White House officials were demanding that Medicaid be included in automatic spending cuts, Lew, usually a measured and even-tempered fellow, started shouting, “No means no. No! No! No!” Low-income programs had not previously been included in such cuts (known as sequestration), and Lew was not going to establish such a precedent.

Bowles, a former investment banker, did offer conventional advantages for the White House. His name has become synonymous with deficit reduction. He has connections on Wall Street. He serves on the board at Morgan Stanley; his wife does the same at JPMorgan. Prior to the CNBC report, a former senior Treasury official sussed out the difference between Lew and Bowles this way:

Jack is probably well suited to the role given the upcoming agenda—fiscal issues, tax reform, etc. All play to his strengths. Hill Republicans like him and he’ll be reasonably easily confirmed if they aren’t in full on obstructionist mode. Erskine has become (recently) the darling of the business community and, from that perspective, would be seen as more conciliatory by the corporate world and, presumably would be hard for GOP to oppose. On the other hand, Bowles-Simpson has more tax revenue than the President’s 2011 [budget] offer and he’s a reasonably partisan guy beneath the bipartisan veneer.…Erskine is probably a little smoother with beyond the beltway types, and Jack is deeper in tune with Dem constituencies after years on the Hill and at OMB. From Wall Street’s perspective, neither is seen as having deep capital markets experience…and would not be seen as safe hands in a new crisis. But Erskine is definitely more of a known quantity…So, he’d been seen as bank friendly although, like a lot of Dems in NC, he’s got a pretty good populist streak. In a poll though, I’m sure 9 out of 10 Wall St. types would take him over Jack whom they view as a Hill guy.

Should Bowles somehow end up at Treasury, that would send a signal that Obama is counting on the Republicans to be reasonable—and that would be worrisome. As Timothy Noah recently pointed out,

Bowles’s favored identity is Mr. Fix-It. He’s a technocrat who knows how to get things done. Prized for his competence and sometimes loathed for his pliability, Bowles is capable of playing a constructive role in bridging partisan differences. But his disdain for political gamesmanship, his weak attachment to party or principle, and his determination to strike a deal at any cost make him the wrong man to tame today’s Republicans.

In recent years, Bowles, who has twice lost Senate races in North Carolina, has displayed a willingness to be overly gracious toward the obstructionists and extremists of the right. When Republican Rep. Paul Ryan. a member of the Simpson-Bowles panel, voted against the co-chairmen’s deficit reduction proposal—which included revenue increases—Bowles described Ryan as “honest” and “sincere,” bolstering the inside-the-Beltway view that Ryan is courageous for pitching budget plans that whack spending programs for the poor and dole out hefty tax breaks to the rich. After Mitt Romney chose Ryan to be his running mate, Bowles remarked, “I’m not going to act like I don’t like him or that I don’t have some real respect for him.”

Lew and Bowles have both engaged in fierce budget combat with Republicans, and each comes across as a by-the-numbers budget geek. Yet the differences between the two are significant. There’s no telling yet whether Bowles is truly out and whether there are other candidates besides Lew. Yet one thing is sure: Obama will reveal much by whom he decides to bank on.