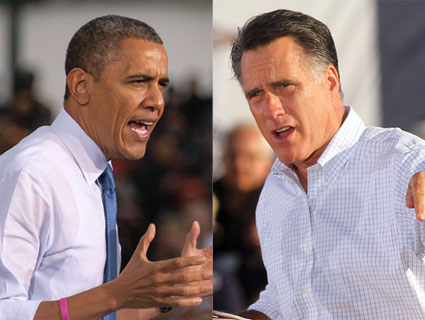 The most significant public statement from a presidential campaign this year did not pass through the lips of a candidate. It came during the Republican convention in Tampa when Mitt Romney’s pollster, Neil Newhouse, declared at a breakfast panel organized by ABC News, “We’re not going to let our campaign be dictated by fact-checkers.” With these words, Romney’s chief numbers guy was issuing a manifesto: This campaign is about saying whatever needs to be said to win, reality and facts be damned. It was an appropriate slogan, for the 2012 campaign has been profoundly shaped by Romney’s willingness to obfuscate and dissemble far beyond the admittedly low norm of modern American politics. This election was not only about a clash of political civilizations; it was about the end of political truth.

All politicians shade the truth—or lie. Various fact-checking outfits have rapped President Barack Obama for making false statements. But Romney pushed the envelope this election cycle. He didn’t merely shift shapes and flip-flop excessively—or, flip-flop-flip, considering his last-minute, dare-devilish swerve toward the middle on abortion, gay rights, and immigration. He didn’t only hype his past history and qualifications (I created 100,000 jobs at Bain!) and issue grand and hollow promises about his proposed policies (my economic plan will lead to 12 million jobs). He didn’t just mislead through the selective use of facts (the Benghazi raid was proof of Obama’s foreign policy fecklessness). Romney engaged in foundational lying.

The Republican presidential candidate built much of his campaign on basic untruths about the president. Romney blasted Obama for breaking a “promise” to keep unemployment below 8 percent. He claimed the president was “apologizing for America abroad.” He accused Obama of adding “nearly as much debt as all the previous presidents combined” and of cutting $500 million from Medicare. None of this was true. (See here, here, here, and here.)

All of these apocryphal statements have been essential parts of Romney’s fundamental case against Obama: He’s failed to revive the economy and he’s placed the nation at risk. Rather than stick to a discourse premised on actual differences (he believes in government investments and would raise taxes on the wealthy to fund them; I want to shrink government and cut taxes)—and bend the truth within acceptable boundaries to bolster the argument—Romney has repeatedly relied on elemental falsehoods, with no regard, as Newhouse noted, for being called out on any of them. He has insisted that under Obama “government will come to control half the economy.” (Not so.) That Obama told small business owners that they didn’t build their own businesses. (Again, not so.) That the Obama administration appeases and sides with terrorists and enemies of the United States. (Also not so.) That Obama weakened welfare rules to win votes—wink, wink—from “his base.” (Really not so.) It was objections to Romney’s arguably race-tinged welfare assault—raised by mainstream media journalists—that prompted Newhouse to declare the Romney crew’s disdain for fact-checking.

The list goes on. Steve Benen, who writes for Rachel Maddow’s blog, chronicled 917 of what he calls Romney “lies.” Partisans of the right will harrumph, defending Romney on some points, and insist that Obama is a falsehood-hurler, too. But consider one set of statistics, which are flattering to neither candidate, but show Romney with a clear lead when it comes to bogus claims. Of the 202 Romney statements PolitiFact has evaluated, 32 percent were judged mostly false and false, with pants-on-fire statements accounting for an additional 9 percent. Of the 452 Obama assertions reviewed, 26 percent fell into the false or mostly false category, and 2 percent were pants-on-fire untruths.

The numbers tell only part of the story. This is what’s most intriguing: Only three of Obama’s seven POF fibs targeted Romney. This included Obama’s tongue-in-cheek charge that Romney plans to “fire” Big Bird. (PolitiFact contended that Romney’s proposed cuts to public broadcasting would not have much impact on Sesame Workshop.) The other two pants-on-fire citations Obama received were for accusing Romney of backing a bill that outlawed all abortions, even in cases of rape and incest (Romney had endorsed a “human life” amendment, and only some versions of this have explicitly ruled out exceptions), and for saying Romney supported zeroing out aid for Israel (at a debate Romney agreed with other GOP candidates to “start” all foreign aid “at zero” and then consider which countries would get what).

Romney’s stats reveal a different a trend: All but one of his 19 pants-on-fire statements were aimed at Obama or his policies. And they were all supersized fibs: the apology tour; Obama raising taxes on middle class families by $4,000; Obama “ending Medicare as we know it“; Obama endangering the United States by downsizing the Navy and Air Force; and, “we’re only inches away from no longer being a free economy.”

Romney’s false assertions have been the building blocks of his campaign. And he has tethered his truth-trampling to a disregard for transparency. He succeeded in keeping most of his tax returns hidden from public scrutiny—one of the major tactical successes of his campaign. He never fully explained his offshore accounts or magical IRA, valued between $20 million and $100 million. Unlike Obama and past candidates, he refused to disclose his major campaign fundraisers (a.k.a. “bundlers”). Romney has not yielded to the calls to identify the tax deductions he would end to compensate for lowering tax rates for well-to-do Americans and other taxpayers.

It was fitting that Romney concluded his not-to-be-dictated-by-fact-checkers campaign with the charge—made in a Romney speech and then advanced in an ad—that Chrysler, thanks to Obama’s rescue of the auto industry, is moving Jeep production to China. This assault packed a tremendous amount of mendacity into one package. Throughout the campaign, Romney has ducked reports that when he was at Bain Capital he presided over investments in firms that outsourced and offshored jobs to China and elsewhere. (I broke some of these, such as this and this.) Romney has also had to contend with the most inconvenient op-ed ever written: his November 18, 2008, “Let Detroit Go Bankrupt” column in the New York Times. Earlier this year, Romney insisted he deserved “a lot of credit” for the revival of the auto industry because he had pushed for a “managed bankruptcy.” He also argued that without Obama’s “intervention things would be better” for car manufacturers. This was all disingenuous puffery. As Justin Hyde (like many others) noted, “At the time of their bankruptcies, no one but the U.S. government had the money or stomach for the risks of saving Chrysler and GM. There was no course for survival but through the Obama administration.” Romney had nothing to do with the rescue, and his critique of Obama has been dishonest.

Yet with his Jeep attack, Romney conjured up a whole new reality. Chrysler was not, it turned out, relocating production from the United States to China; it was expanding production in China to make Jeeps for the Chinese market (while also increasing production in the United States). Chrysler execs, who no doubt would prefer not to intervene directly in a presidential campaign, issued a statement noting, “Jeep has no intention of shifting production of its Jeep models out of North America to China.” Yet the Romney camp didn’t shift into reverse. It recklessly sped forward, with an ad claiming, “Mitt Romney has a plan to help the auto industry…Obama took GM and Chrysler into bankruptcy and sold Chrysler to Italians who are going to build Jeeps in China. Mitt Romney will fight for every American job.” With this spot, Romney, the candidate who invested in Chinese outsourcing and who opposed the auto bailout, was deploying disinformation to transform Obama into the outsourcing guy who sold out the auto industry to the Chinese.

It doesn’t get much more brazen than that. The Washington Post‘s “Fact Checker” column handed Romney four Pinocchios, it’s top—or lowest—rating, observing that the “misleading” ad “shows that we have entered the final, desperate week of the campaign.” But for Romney, this was not desperation; this was merely a continuation of his screw-the-truth strategy. His campaign didn’t seem to care about being branded deceitful. Newspapers throughout Ohio reported that Romney was pushing a phony attack. When the campaign aired a similar radio ad referring to GM, a spokesman for that auto company rebuked Romney: “We’ve clearly entered some parallel universe during these last few days.” After Donald Trump rushed to back up Romney’s Jeep fusillade, a Chrysler official tweeted at him, “You are full of shit!”

Parallel universe, or full of shit—Romney wrapped up his presidential bid true to Newhouse’s pledge. James Fallows has bemoaned that the nation now is stuck with “post-truth politics.” And Romney broadened the horizons of this era—to such an extent that the Obama campaign felt justified in releasing a counter-Jeep ad accusing Romney of having peddled a “lie.” As nasty as politics can get, campaigns do tend to shy away from using the L-word. (Rep. Joe Wilson was pilloried for calling Obama a liar during his 2009 address to Congress on health care.) But, finally, Chicago let it fly.

As this bitter and often ugly presidential race hurtles to a close, with each campaign relying on its ground operations, and with Obama and Romney darting from one swing state to another to court those remaining 37 undecided voters, what remains to be seen is this: Will the bullshit work? Romney did run smack into a media backlash after the Jeep ad, yet the polls remained close. It was unclear whether he would pay a price for such an audacious stunt. He had committed a mugging in plain sight—just as he had when he was caught on video dismissing nearly half the nation as moochers and victims who do not take personal responsibility for their own lives—but he was still in a position to get away with it.

Election Day will say whether Romney has indeed brought about the complete triumph of post-truth politics. In a Seinfeld episode, George Costanza famously observed, “Remember, it’s not a lie if you believe it.” In Romneyworld, that line might be modified: It’s not a lie if it works. As significant as Tuesday’s outcome will be for this much-divided nation in determining future policies regarding the economy, present and future wars, abortion rights, climate change, the social safety net, and much more, it will also provide an answer to a critical bottom-line question: In politics, does reality matter?