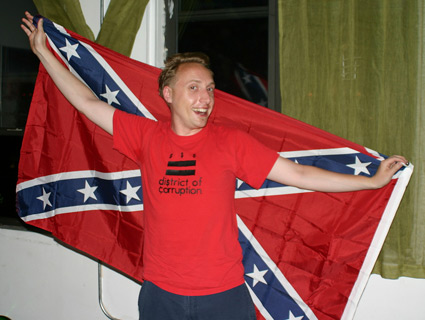 Well, President Barack Obama won reelection. And by quite a lot, actually.

The options for despondent conservatives are somewhat limited at this juncture: They can pout. They can turn on each other. They can keep their heads and plot a 2016 comeback. They can call for impeachment hearings.

Or they can play the secession card.

In the days since the election, the White House website has been inundated with secession-related petitions on its “We the People” page, with concerned citizens requesting the “peaceful” secession of more than half of the country’s states. The Louisiana petition has received over 28,000 signatures, and Texas’ now has over 25,000. Per the “We the People” rules, these petitions now have enough signatures to merit an official response from the White House. “None of the petitions explicitly cite Obama’s reelection as a reason for independence, but all were created after last week’s elections,” Politico‘s Byron Tau reported on Monday. “Most of the petitions simply quote the Declaration of Independence in their request to depart the country.” Via his press secretary on Monday, Texas governor (and former 2012 Republican presidential candidate) Rick Perry came out against secession while emphasizing his continued “frustrations” with the federal government. (It appears Perry’s tone has softened since 2009.)

Nearly identical secession petitions have also been created for over 30 states. Here’s an example of one petition asking the federal government to, “Peacefully grant the State of New York to withdraw from the United States of America and create its own NEW government.” It’s important to note that this petition was created by “C R” in Grand Forks, North Dakota, not by anyone in New York. It cropped up on November 10, and currently has upwards of 11,000 signatures: 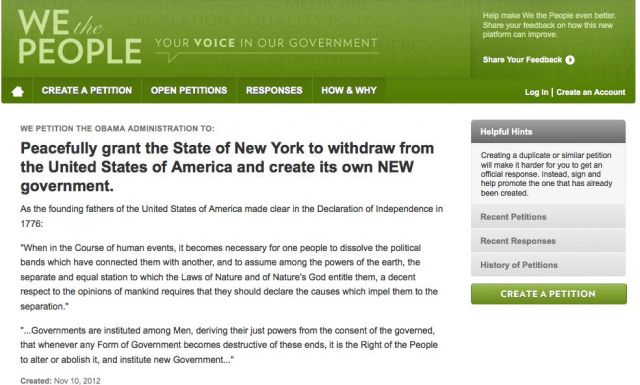 The White House(A minor backlash to these on “We the People” includes a counterpetition titled, “Deport Everyone That Signed A Petition To Withdraw Their State From The United States Of America.”)

Though the “We the People” petition page is a nice enough idea, it frequently unleashes spates of White House-sanctioned trollmageddon. If the parade of lazily crafted secession entreaties aren’t enough for you, here’s the Obama administration’s response last year to two separate petitions demanding answers regarding an X-Files-style alien cover-up. There was also that one petition asking the White House to start taking these petitions more seriously.

Meanwhile, down in southeast Texas, Peter Morrison, a treasurer of the Republican Party in Hardin County (897 square miles, population 55,200, 90 percent white), wrote a column in a local tea party newsletter shortly after Obama’s 332-206 Electoral College win. The op-ed pretty much summed up how hard he took election night:

We must contest every single inch of ground and delay the baby-murdering, tax-raising socialists at every opportunity. But in due time, the maggots will have eaten every morsel of flesh off of the rotting corpse of the Republic, and therein lies our opportunity…Texas was once its own country, and many Texans already think in nationalist terms about their state. We need to do everything possible to encourage a long-term shift in thinking on this issue. Why should Vermont and Texas live under the same government? Let each go her own way in peace, sign a free trade agreement among the states and we can avoid this gut-wrenching spectacle every four years.

Morrison goes on to rail against “many” members of minority groups as “simply racist against the party most white people happen to vote for,” taking special exception to (overwhelmingly) Democratic-leaning Asian American voters who “[should be Republicans] as they earn more money and pay more in taxes than white Americans.” He describes his proposal as an “amicable divorce” from the rest of America.

Okay, well….I guess I need to start taking a look at his newsletters…I don’t think a lot of people [in Texas] are saying we ought to leave the Union.

In response to Morrison’s venting, Hardin County’s GOP posted this statement to their website: 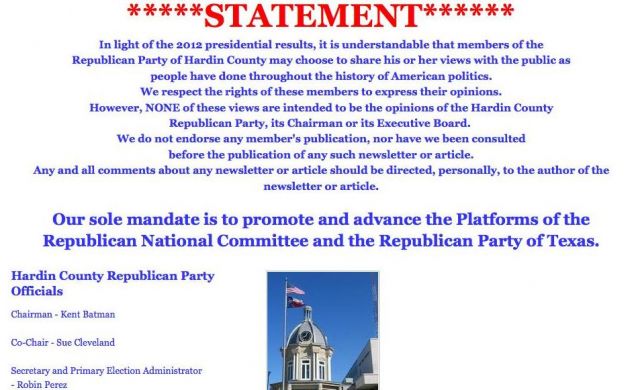 The sheer volume of “Barack Obama is president! Time to reenact 1860“-type pronouncements that have poured out over the last four years is remarkable. These recent examples won’t be the last, and certainly weren’t the first. Here’s a look back at some secession-happy highlights during Obama’s first term:

Obama isn’t the first Democratic commander-in-chief who’s had to deal with this kind of loose secession talk. You only have to look back as far as the ’90s, when Bill Clinton took his fair share of secession-hate over episodes like Waco and Ruby Ridge.

For a broader look at American secession movements, check out our interactive map of contemporary separatist groups—from the League of the South to stoner homeland “Ganjastan”—that want to ditch the United States and go it alone: