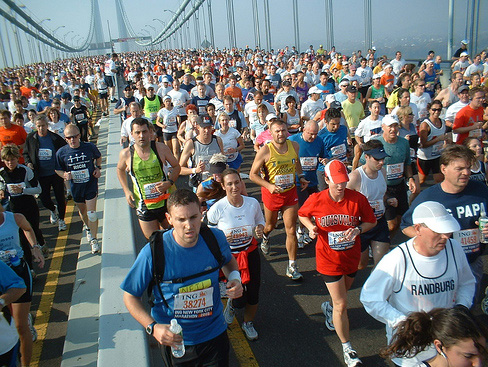 UPDATE: Mayor Michael Bloomberg changed course Friday evening, canceling the marathon.”While holding the race would not require diverting resources from the recovery effort, it is clear that it has become the source of controversy and division,” he said in a statement.

The New York City Marathon, slated for this Sunday, is the biggest running event in the US. Each year, more than 100,000 people apply for one of the 47,000 spots, and then train for months to complete the grueling 26.2-mile course through the city’s five boroughs. But given the destruction wrought by Hurricane Sandy, many people are surprised and, quite frankly, pissed off that Mayor Michael Bloomberg has decided not to cancel the race.

There’s a debate raging on my Facebook feed right now about whether or not that was the right thing to do. I run, and I hang out with a lot of runners, and several of my friends are supposed to compete in New York this weekend. I completely get why runners would be frustrated if the race were canceled. That’s a lot of training down the tubes. The city has also offered some good reasons to keep the race going. It brings in an estimated $340 million in revenue for the city, and generates $34 million for charities. Race officials say that they are going to dedicate the race to those who are suffering, and use it to help raise money and awareness to bolster recovery efforts.

That said, it seems difficult to argue that the marathon is the best use of everyone’s time and effort this weekend, given that thousands of people are still without shelter, power, food or water. In addition to the runners, there are 700 people staffing the race, 10,000 volunteers, and 2.5 million spectators. Putting on the event also requires the work of hundreds of police, sanitation workers, and transit officials—all of whom could instead be deployed to help restore the city.

The marathon uses a lot of resources that others in the city probably need more right now—like the 93,600 eight-ounce bottles of water handed out to runners, in addition to the 62,370 gallons of water used along the course. Marathons also distribute many pounds of food, which could go to needier New Yorkers—such as elderly people stranded without electricity in apartment buildings, as this video from the Climate Desk shows:

The race would also tie up traffic and transit, which the city really just doesn’t need right now.

I can’t put it any better than these New York runners who started an online petition asking the city to postpone the race until next spring: “This event is always a positive event and it should not be turned into a hugely negative drain on city resources.”