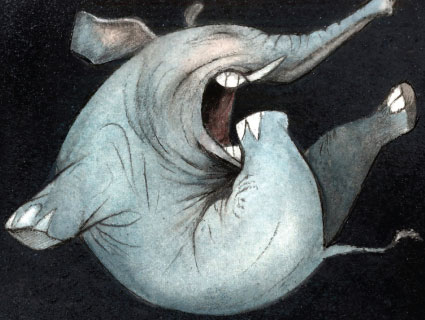 Its birth certificate says that the tea party was born one month after Barack Obama’s inauguration, on the day that CNBC’s Rick Santelli delivered a blistering on-air tirade against Obama’s mortgage bailout plan. But that’s only the official story. In reality, we’ve seen the tea party before. When FDR was president, it was called the American Liberty League. When JFK was president, it was the John Birch Society. When Bill Clinton was president, it was the Vince Foster conspiracy theorists. America’s far right fluoresces like this whenever a Democrat is in the White House, and Obama’s first term was no exception.

But the tea party burned bright and fell fast. Sure, it galvanized opposition to Obama in a media-friendly kind of way, and helped power the Republican Party to a big majority in the House of Representatives in the 2010 midterms. But given the state of the economy this was a victory they probably would have won anyway. And on the other side of the Capitol building, the tea party was almost certainly responsible for the loss of three winnable Senate seats that year. By 2012, after tea party forces nominated several more “wackadoodles” (in Republican strategist Steve Schmidt’s phrasing) and helped the GOP lose two more winnable Senate seats, its name was officially mud.

So what’s next? Having now lost two presidential elections in a row, conventional wisdom says Republicans have two choices. The first is to admit that tea partyism has failed. 2012 was its best chance for victory, and evolving demographics will only make hardcore conservatism less and less popular. As South Carolina Sen. Lindsey Graham has put it, “We’re not generating enough angry white guys to stay in business for the long term.” So the party will need to moderate or die.

The second option is to double down. Party activists will tell themselves that Mitt Romney was never a true conservative, and that’s what voters sensed. But Republicans can win again in 2016 if they stay true to their principles, moving farther right and amping up the obstruction of all things Obama even more. In Congress, Paul Ryan will be their pied piper and Eric Cantor will be their enforcer.

To most liberals, it seems obvious that if the GOP’s leaders are smart, they’ll choose the first option. But the truth is that this isn’t as obvious as we’d like to believe. After all, moving to the right has worked out pretty well for the party. In 1980, the Reagan revolution gave them control of the Senate for the first time in decades. In 1994, the Gingrich revolution gave them control of the House. In 1998 they impeached Bill Clinton, and two years later won the presidency. In 2009 the tea party took over, and in 2010 they won a landslide midterm victory. The truth is that an ever more radicalized GOP seems to have done at least as well as a more normal GOP probably would have done. Maybe better.

So for now, at least, it seems probable that we’re stuck with Option 2. Republican Party elders will probably try to be a little more careful about vetting candidates for political Tourette syndrome (no more “legitimate rape,” please), but otherwise the tea party strain will remain ascendant even if the name itself is relegated to the ash heap of history. Republicans will continue to deny climate change, continue to insist that tax cuts pay for themselves, and continue to believe that Barack Obama is a socialist revolutionary. They will once again hold America’s economy hostage over the debt ceiling and tax cuts for the rich, and they will continue to filibuster every single bill that Democrats introduce in the Senate.

That much is, frankly, so predictable as to be uninteresting. What is interesting is this: Why doesn’t the American electorate punish this behavior? After all, polls don’t suggest that the public has moved much to the right over the past few decades, and yet it continues to give an ever more right-wing Republican Party about 50 percent of the vote. What’s going on?

At this point we enter the realm of guesswork. One guess is that the public treats unhinged behavior from Republicans these days as merely a kind of brand marker, not something to be taken seriously. Based on past experience, they figure that once Republicans are actually in office they’ll talk crazy but mostly act like a fairly normal conservative party.

For liberals, a more unnerving guess is that we simply haven’t made ourselves into a consistently appealing alternative for persuadable centrists. We’re too eager to raise taxes. We display too much public contempt for things like religion and gun ownership. We don’t offer the middle class enough in the way of concrete benefits, and when we do (as with Obamacare) we sell it so poorly that people barely even realize what they’re getting.

If either—or both—of these things are true, it’s easy to see why Republican extremism hasn’t hurt them very much. The next few years, however, could finally be different. If Republicans hold the American economy hostage over the debt ceiling again, their crazy talk might start to sound a little more worrisome. If voters start taking climate change more seriously in the wake of Sandy, concerned independents might abandon a denialist GOP. If the growth of the black and Hispanic electorate causes Republicans to double down on efforts to suppress the nonwhite vote, they could provoke a serious backlash. And if Obamacare gets implemented competently and Democrats make serious progress on reining in the deficit, centrists might not have much reason left to vote against them.

In any case, there’s a simple message here for lefties: Don’t worry so much about Republicans. Worry about getting the public on our side. If we do that, the GOP will either back away from crazytown or else it will die a natural death. To borrow James Carville’s famous epigram, It’s Public Opinion, Stupid.