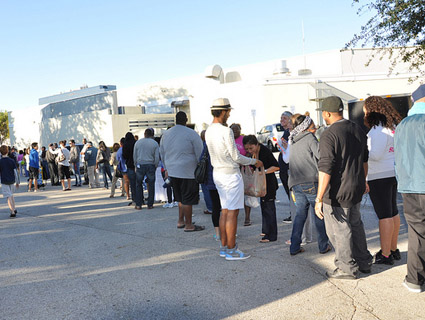 According to a report in the Palm Beach Post, current and former Republican Party officials in Florida have confirmed what voting-rights advocates have long suspected: That the GOP has hyped concerns about voter fraud as a means to reduce Democratic election turnout. Former Governor Charlie Crist told the Post that party leaders approached him when he was governor to see if he’d back efforts to limit early voting. While he didn’t recall the officials explicitly saying their intention was to target black voters, Crist said that “it looked to me like that was what was being suggested. And I didn’t want them to go there at all.”

In 2011, Crist’s successor, Republican Gov. Rick Scott, signed a bill passed by the GOP-controlled legislature that slashed Florida’s early voting period from two weeks to eight days. (The bill also tightened restrictions on voter registration laws, although many of those provisions were tossed after a court challenge.) This November, Florida was plagued with long early voting lines that extended into Election Day and may well have disenfranchised voters.

Republican Party of Florida spokesman Brian Burgess told the Post that Crist, who recently left the GOP and is considering running for governor as a Democrat, “speaks out of both sides of his mouth” and implied that Greer’s claims weren’t credible in light of his indictment for embezzling $200,000 from party coffers. But two current Republican consultants also told the Post that their party’s intentions were clear:

Wayne Bertsch, who handles local and legislative races for Republicans, said he knew targeting Democrats was the goal.

“In the races I was involved in in 2008, when we started seeing the increase of turnout and the turnout operations that the Democrats were doing in early voting, it certainly sent a chill down our spines. And in 2008, it didn’t have the impact that we were afraid of. It got close, but it wasn’t the impact that they had this election cycle,” Bertsch said, referring to the fact that Democrats picked up seven legislative seats in Florida in 2012 despite the early voting limitations.

Another GOP consultant, who did not want to be named, also confirmed that influential consultants to the Republican Party of Florida were intent on beating back Democratic turnout in early voting after 2008.

UPDATE, November 28, 2012: Republican Party of Florida spokesman (and former Rick Scott communications director) Brian Burgess sent out a press release today attacking the Palm Beach Post for its “unsupported claims” and “dubious sourcing.” He pointed to a statement on the state GOP’s website from Wayne Bertsch, who says he “never participated in any discussion or meetings with any of the named individuals about how to create impediments to any voters,” has never been on contract with the party, and that “a quote from me [was taken] entirely out of context.”

Burgess also repeated the assertions he made to the Post that Crist and Greer are untrustworthy sources with an axe to grind against the GOP, and claimed the fourth, unnamed source in the Post‘s story “has no first hand observations to substantiate Greer’s claim” that voter suppression talks happened. Meanwhile, Florida Democrats have called for a federal civil rights investigation because of the story.