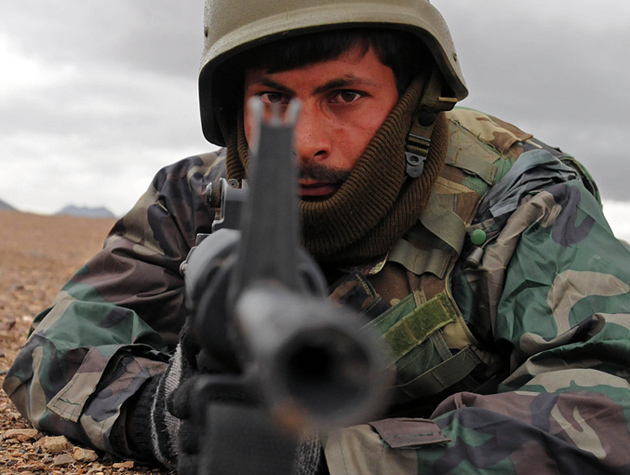 An Afghan National Army trains during an exercise in Herat Province, Feb. 2, 2011.<a href="http://www.flickr.com/photos/isafmedia/5413481502/sizes/l/in/photostream/">Flickr/isafmedia</a>

Does a new draft of an Army manual on cultural sensitivity blame boorish Americans for attacks by Afghan soldiers? That’s what the Wall Street Journal suggested Tuesday. The newspaper, which got its hands on a copy of the as-yet unreleased handbook, reports that it advises US troops in Afghanistan to shut up about politics, religion, women, homosexuality, and other potentially divisive issues around locals, lest they stoke the sorts of tensions that lead to “green on blue incidents”—violence against American forces by their ostensible military allies.

“Many of the confrontations occur because of [coalition] ignorance of, or lack of empathy for, Muslim and/or Afghan cultural norms, resulting in a violent reaction from the [Afghan security force] member,” the handbook states. That’s apparently a controversial statement. A spokesman for Marine Gen. John Allen, the US commander in Afghanistan, told the Journal that “Gen. Allen did not author, nor does he intend to provide, a foreword” to the handbook because he “does not approve of its contents.”

One possible reason is that Allen doesn’t want to be seen as blaming American faux pas solely for insider attacks. That’s understandable, but neither should he hew to the conservative line that Taliban- and Al Qaeda-style Muslim fervor is solely to blame, and all attempts at cultural sensitivity are defeatist. Typical of this perspective is a September New York Post op-ed by Paul Sperry, a Hoover Institution fellow, bemoaning the military’s “Islamic finishing school” efforts as “blaming our troops,” while “truly obnoxious” Afghan army trainees kill US soldiers—and “stand on our toilets and poop all over them.”

Scatological orientalist piffle aside, there’s no reason US troops can’t be culturally sensitive and attuned to threats in their midst at the same time. In this light, the new handbook (which I have not yet read in its entirety) sounds like a quantum advance in military operations. For starters, it doesn’t portray Afghans as faceless Lego people and assert that they are all “illogical,” “paranoid,” and “distrustful by nature,” “perhaps due to the harsh, desert environment” that they “have lived in for thousands of years.” Those are all quotes about natives from the US military’s Iraq Transitional Handbook, which I was issued when deploying there in 2008.

But more importantly, telling troops to refrain from discussing controversial topics among their colleagues is nothing they don’t already know: It’s standard military etiquette, as much a part of donning the uniform as saluting or mastering one’s weapon. As the naval officer’s guide states—and has stated since I went through basic training, nearly two decades ago—when you’re among your colleagues, “Keep conversation pointed towards non-controversial topics. Typically sex, religion, and politics are not discussed at the wardroom table.” The reason for this injunction? There’s no sense in stoking tensions among the people you may someday rely upon to save your life. You know, “band of brothers” and all that.

So why, then, would conservatives like Sperry reject cultural training, and require US troops to be less civil to Afghans than those troops are required to be to each other? It’s a move that doesn’t make sense—unless you generally see Afghans as less human than Americans, less worthy of treatment as equal partners in a common mission. That’s not just a losing prescription in a war for “hearts and minds”; it’s a betrayal of American values.