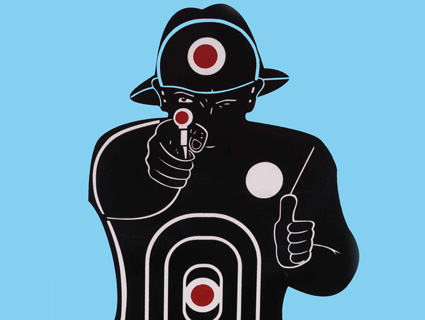 In the wake of the unthinkable massacre in Newtown, Connecticut, pro-gun ideologues are once again calling for ordinary citizens to arm themselves as a solution to mass shootings. If only the principal at Sandy Hook Elementary School had possessed a M-4 assault rifle she could’ve stopped the killer, they say. This latest twist on a long-running argument isn’t just absurd on its face; there is no evidence to support it. As I reported recently in our in-depth investigation, not one of 62 mass shootings in the United States over the last 30 years has been stopped this way. More broadly, attempts by armed civilians to intervene in shooting rampages are rare—and are successful even more rarely. (Two people who tried it in recent years were gravely wounded or killed.) And law enforcement overwhelmingly hates the idea of armed citizens getting involved.

Those pesky facts haven’t stopped the “arm America more!” crowd from pressing the argument with alleged examples of successful armed interventions. The problem is, the few examples they keep using—in which they depict plain old folks acting heroically and with definitive results—fall apart under scrutiny. Here are five cases commonly cited and why they don’t work:

Appalachian School of Law shooting in Grundy, Virginia
Gun rights die-hards frequently credit the end of a rampage at the law school in 2002 to armed “students” who intervened. They conveniently ignore that those students also happened to be current and former law enforcement officers, and that the killer, according to police investigators, was out of ammunition by the time they got to him.

Middle school dance shooting in Edinboro, Pennsylvania
An ambiguous case from 1998, in which the shooter may well have already been done shooting: After killing a teacher and wounding three others, the 14-year-old perpetrator left the dance venue. The owner of the venue followed him outside with a shotgun, confronting and subduing him in a nearby field until police arrived. The Atlantic‘s Jeffrey Goldberg, who himself recently argued for more guns as an answer to gun violence, told me this week that one police source he talked to about this case said that it was “not clear at all” whether the kid had intended to do any further shooting after he’d left the building.

High school shooting in Pearl, Mississippi
Another case, from 1997, in which the shooting was apparently already over: After killing two and wounding seven inside Pearl High School, the 16-year-old perpetrator left the building and went outside near the parking lot. The assistant principal—who was also a member of the Army Reserve—ran out to his own vehicle, grabbed a handgun he kept there, and then approached the shooter, subduing him at gunpoint until authorities arrived.

New Life Church shooting in Colorado Springs, Colorado
In 2007 a gunman killed two people and wounded three others before being shot himself; the pro-gun crowd likes to refer to the woman who took him out in the parking lot as a “church member.” Never mind that she was a security officer for the church and a former cop, and that the church had put its security team on high alert earlier that day due to another church shooting nearby.

Bar shooting in Winnemucca, Nevada
In 2008, a gunman who killed two and wounded two others was taken out by another patron in the bar, who was carrying with a valid permit. But this was no regular Joe with a concealed handgun: The man who intervened, who was not charged after authorities determined he’d committed a justifiable homicide, was a US Marine.

And what about cases in which citizens try to use their guns and things go terribly wrong? There are at least two examples of ill-fated attempts that you won’t see mentioned by those arguing for your kid’s teacher to start stashing a loaded Glock in her classroom:

Shopping mall shooting in Tacoma, Washington
As a rampage unfolded in 2005, a civilian with a concealed-carry permit named Brendan McKown attempted to confront the assailant with his handgun. The assailant gravely wounded McKown, and shot five other people before eventually surrendering to police after a hostage standoff. A comatose McKown recovered after weeks in the hospital.

Courthouse shooting in Tyler, Texas
In 2005, a civilian named Mark Wilson, who was a firearms instructor, fired his licensed handgun at a man on a rampage at the county courthouse. Wilson was shot dead by the body-armored assailant, who wielded an AK-47.

Such actions in chaotic situations don’t just put the well-intentioned citizen at risk, of course. According to Robert McMenomy, an assistant special agent in charge in the San Francisco division of the FBI, they increase the danger for innocent bystanders. (Exhibit A: the gun-wielding civilian who came really close to shooting an innocent person as the Tucson massacre unfolded.) They also make it more difficult for law enforcement officers to do their jobs. “In a scenario like that,” McMenomy said recently, “they wouldn’t know who was good or who was bad, and it would divert them from the real threat.”