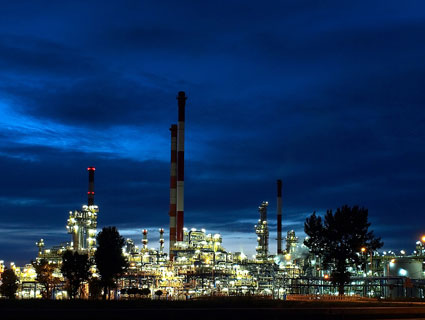 Democrats and Republicans are duking it out in Washington over a deal to avert the slew of spending cuts and tax increases—the so-called “fiscal cliff” you’ve heard so much about—that will take start to effect on January 1. Lawmakers on both sides of the aisle have argued that “everything should be on the table” in negotiations toward a deal that trims the nation’s debt and avoids the cliff. Yet notably absent from the debate over what to cut and what to spare in a deal are the tens of billions of dollars in subsidies, tax breaks, and other perks for the hugely profitable oil industry.

That silence begs the question: Will Big Oil’s subsidies go untouched in the fight over a fiscal-cliff deal?

In news stories and public remarks by leading Democrats and Republicans, there’s been scant discussion of oil subsidies as a potential source of revenue. The proposals floated by the White House and by congressional Republicans have not delved into enough detail to know whether subsidies would be included in their proposed changes. And multiple aides to Senate Democrats say that, while they believe the subsidies are on the table, there hasn’t been much of a push behind the scenes to include them in a fiscal-cliff deal.

In case you didn’t quite believe it, yes, the US government subsidizes Big Oil—shorthand for ExxonMobil, Chevron, BP, Shell, and ConocoPhillips, five of the biggest oil companies. Many smaller drilling and refining companies up and down the supply chain receive subsidies, too. Some of these subsidies date back a hundred years, when the fledgling oil exploration business was risky, even deadly. Today, with a barrel of crude oil costing $90 to $100, Big Oil practically prints money. The big-five corporations piled up profits of more than $1 trillion between 2001 and 2011. ExxonMobil alone raked in $16 billion in profits in April, May, and June of this year, the highest-ever quarterly profit for a US corporation.

Despite such staggering windfalls, the federal government continues to subsidize oil companies large and small. Taxpayers for Common Sense, a nonpartisan government watchdog that wants to cut all energy subsidies, estimates that oil companies will receive $78 billion in industry-specific and broader business subsidies from 2012 to 2017. President Obama’s budget plan for the 2012 fiscal year called for eliminating 13 subsidies or perks for oil companies, which will save taxpayers $4.6 billion a year over the next decade.

Experts of all stripes agree with Taxpayers for Common Sense’s demand that Big Oil’s “gravy train” come to an end. The libertarian Cato Institute, cofounded by Charles Koch, lauded Obama’s plan to slash certain oil subsidies. A Sierra Club official compared subsidizing Big Oil to investing in the future of VCRs or typewriters: “It’s a technology that is on its way out. It doesn’t make a whole lot of sense.” The lefty Center for American Progress think tank says it’s time to “turn off the oil subsidy spigot.”

In Congress, lawmakers ranging from hardline conservatives like Rep. Paul Ryan (R-Wis.) to dyed-in-the-wool liberals like Sen. Bernie Sanders (I-Vt.), and plenty more in between, have called for eliminating oil subsidies. Even oil executives themselves have said in years past that they don’t need the subsidies. ConocoPhillips CEO Jim Mulva told Congress in 2010 that, “with respect to oil and gas exploration and production, we do not need incentives.” And former Shell CEO John Hofmeister once testified, “My point of view is that with high oil prices such subsidies are not necessary.”

But in the recent years, Congress has failed to trim, let alone eliminate, the oil business’ many perks. The closest Congress came to gutting these sweetheart deals were two votes this March on a measure offered by Sen. Bob Menendez (D-N.J.). Menendez’s Repeal Big Oil Tax Subsidies Act proposed cutting away a small slice of the big oil “gravy train”—namely, $2.4 billion a year in tax deductions enjoyed by the big-five oil companies. The vote was 51 to 47, nine votes short of the 60 needed for passage.

Now, with a December 31 deadline looming, members of Congress are scrambling to find government programs to pare back or eliminate as part of a fiscal-cliff compromise. For deficit hawks, experts point out, the $2.4 billion per year saved by cutting oil subsidies isn’t earth-shaking, but it’s low-hanging fruit, fiscally speaking. You would think oil subsidies would play a visible role in the discussions between Democratic and GOP lawmakers on what to cut.

But oil subsidies have gone unmentioned in all the breathless reporting on the thrust and parry over a fiscal-cliff deal. Rory Cooper, a spokesman for House Majority Leader Eric Cantor (R-Va.), points out that congressional Republicans’ offer to the White House was merely the framework of a deal, which didn’t include details on how Congress would bring in the $800 billion in new revenues. Spokespeople for the White House and Senate Majority Leader Harry Reid (D-Nev.) did not respond to requests for comment about whether oil subsidies are part of fiscal-cliff-deal discussions.

One senior Senate Democratic aide says it’s more likely that oil subsidies will be trimmed if Democrats and Republicans agree to a sweeping deal—say, one with spending cuts and new revenues totaling $1 trillion. That way cutting $24 billion in oil subsidies doesn’t seem punitive and so is more politically palatable. “But if we do a short-term deal…so it’s a hundred-billion-plus [toward reducing the deficit], then $24 billion is an awful big chunk of that, and politically it gets more difficult,” the aide says.

Another senior Democratic aide says he thinks it’s more likely that Congress will touch oil subsidies in 2013. “We’re more likely to see the Senate take up this issue after the new year, maybe as part of comprehensive tax reform,” this aide says. “But even then I’m not optimistic.”