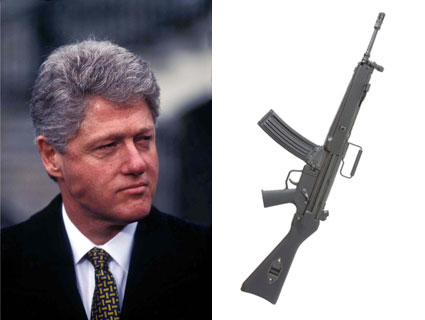 In 1995, while running for reelection, President Bill Clinton released a campaign ad in which the narrator declared, “Bill Clinton did something no president has ever been able to accomplish: He passed and signed a tough law to ban deadly assault weapons.” Then Clinton himself appeared in the spot and boasted he had taken “deadly assault weapons off our streets.” Clinton was referring to the assault weapons ban he had achieved as part of a massive anti-crime bill enacted the previous year. With this legislation, the last major gun control law produced by Washington, Clinton had scored a headline-making political victory, overcoming the fierce opposition of the formidable National Rifle Association. But he had racked up, at best, only a partial policy victory, for the ban was riddled with loopholes and did little to curtail the availability of semi-automatic weapons. Two decades later, as President Barack Obama initiates an effort to enact effective gun control measures in the wake of the Newtown massacre, the 1994 fight holds plenty of lessons for him and his allies.

As a so-called New Democrat preaching third-wayism, Clinton had embraced gun control as part of a wider crusade against crime. Through the 1980s and early 1990s, violent crime was running high, and several high-profile tragedies had involved semi-automatic weapons. (In early 1989, a gunman killed five children and wounded 30 others when he went on a shooting spree with an AK-47 at a Cleveland school.) In 1993, Sen. Dianne Feinstein (D-Calif.), who 15 years earlier had been in San Francisco City Hall when Mayor George Moscone and Supervisor Harvey Milk were assassinated, introduced a ban on assault weapons. Clinton included the ban in sweeping crime legislation that included financing for 100,000 new police officers, an expansion of the federal death penalty, funds for crime prevention programs (most notably midnight basketball for at-risk youths and drug courts), and money for state prison construction.

Rahm Emanuel, the hard-charging White House senior adviser, engineered the main strategy: shove provisions favored by conservatives (more death penalty and prisons) and those fancied by liberals (gun control and rehabilitation programs) into a single package, and the $25 billion-plus bill would have a shot of success. Meanwhile, Clinton draped himself in cops. “At every event he had touting the bill and the assault weapons ban, he had at least 40 cops,” a former Clinton Justice Department official recalls. “And he was pro-death penalty.”

In the ensuing war with the NRA, which was adamantly opposed to the assault weapons ban (even a ban severely weakened through legislative compromise), Clinton used police officers, who argued they were being outgunned by criminals and mad men, as his backup. The fight, as Clinton orchestrated it, was not a soft-on-crime Democratic politician versus the all-American NRA; it was cops versus the extremists of the gun lobby. As the political pros of today might say, Clinton flipped the optics.

Clinton also fully deployed his Cabinet to line up votes for the assault weapons ban. Vice President Al Gore (from Tennessee), Treasury Secretary Lloyd Bentsen (from Texas), and Attorney General Janet Reno (from Florida) leaned on swing votes, especially Democratic legislators from conservative districts who were grousing about being forced to vote for gun control and against the NRA. (At one point during the legislative fisticuffs, though, the White House signaled to Capitol Hill Democrats that it would be willing to dump the assault weapons ban to win passage of the larger crime bill.) Clinton and his allies talked about crime and safety, not the evils of gun ownership. As Newsweek reported at the time, “By enlisting police and repeatedly stressing their support for hunting, the Democrats looked anti-crime rather than anti-gun.”

It worked. By tethering the cop-backed assault weapons ban to conservative policies within a bill that doled out lots of money to various constituencies, Clinton bagged enough votes on both sides of the aisle for passage, even as staunch liberals and ardent conservatives voted against the crime bill. (The assault weapons ban passed by a two-vote margin in the Democrat-controlled House.) Clinton vanquished the NRA. It was an impressive political feat for the first-term president.

But to what end? The assault weapons ban proved of little value where it counted most: on the street. The legislation prohibited the manufacture, possession, transfer, and sale of assault weapons and high-capacity ammunition clips, yet it defined assault weapons in a manner that would allow gun manufacturers to skirt the ban without much trouble. It exempted 650 firearms and grandfathered in weapons and ammo clips produced or purchased before the enactment of the ban. “It was better to get what we got than nothing,” the former Justice Department official says. And the measure’s prohibition on high-capacity clips was probably its most effective provision. “Ultimately, the 1994 ban was almost meaningless because it was so defectively drafted,” says Tom Diaz, a senior policy analyst at the Violence Policy Center, who worked for the House subcommittee on crime in 1994.

The law did little to affect gun violence. Prior to the ban, nervous gun owners and dealers stocked up on assault weapons and the high-capacity clips, and afterward gun manufacturers made cosmetic changes to semi-automatic weapons so these guns would not violate the new law. And the 1994 federal ban was passed with a built-in 2004 expiration date. When the time ran out, then-President George W. Bush did nothing to extend the law. During the 2008 presidential campaign, Obama called for reviving the assault weapons ban. But after he became president, his administration took no steps to do so. Guns were too hot (politically) to touch.

The .223 caliber Bushmaster AR-15 semi-automatic rifle reportedly used by Adam Lanza in the Newtown shootings was the sort of weapon gun control advocates had hoped to prohibit with the 1994 ban. Yet even though the state of Connecticut passed its own assault weapons ban, modeled on the 1994 federal law but with no sunset clause, this particular gun was legal in the state because Bushmaster had made a slight and insignificant change in its design to evade restrictions.

Now Obama has committed to a robust gun control program. At a White House press conference on Wednesday, he announced that he had asked Vice President Joe Biden, who helped draft the 1994 crime bill, to lead an initiative that would propose a variety of gun safety measures by the end of next month. And the president ticked off several proposals that would likely be included in the Biden recommendations, with an assault weapons ban topping the list that also included a ban on the sale of high-capacity ammunition clips and background checks for all gun purchases.

As Obama assumes this tough mission, he can look back to the 1994 episode for guidance on how to win the politics and how to avoid screwing up the policy. Clinton savvily enlisted the law enforcement community and made good use of his Cabinet. Obama could emulate both moves. (He has instructed members of his Cabinet to help craft recommendations for Biden’s task force.) Yet to make sure his efforts yield real-world results, the president will have to be mindful of policy particulars and not repeat the errors of 1994. “If you’re going to be effective, you have to have a broad-based ban on weapons and on ammo,” the former Justice Department official says.

Feinstein, according to sources close to her office, is aware of the limitations of the 1994 ban and is preparing a new version to introduce next month, on the first day of the new Congress. Her measure will be based on a California state law prohibiting assault weapons that gun control advocates consider a fine model for a new federal ban. (A Washington Times column claimed her legislation would “abolish the 2nd Amendment.”) Gun control advocates expect Feinstein’s proposed legislation to become the lead measure in Obama’s package. But the question remains: Can such a proposal survive the usual Washington horse-trading and end up effective?

One conclusion that can be drawn from the 1994 battle was that the weak ban that emerged might not have been worth the cost. And there was a stiff cost. When Congress passed the assault weapons ban, the NRA vowed vengeance. Months later, the Republicans, backed by the still-outraged NRA, romped the Democrats in the midterm election, gaining 54 seats and control of the House for the first time in 40 years. Clinton, for one, believed that voting for the the assault weapons ban had cost about 20 House Democrats their seats—meaning that the measure had caused a political backlash that led to a GOP the majority in the House. If Obama and others confront the NRA, they had better expect—and prepare for—a battle that will reach a crescendo on November 4, 2014.

At his press conference two days ago, Obama noted that to succeed in passing new gun control laws, “it’s going to take a wave of Americans—mothers and fathers, daughters and sons, pastors, law enforcement, mental-health professionals, and, yes, gun owners—standing up and saying ‘enough’ on behalf of our kids. It will take commitment and compromise, and most of all, it will take courage.” It will also take a deep and full understanding of what went right and what went wrong the last time a president challenged the gun lobby.