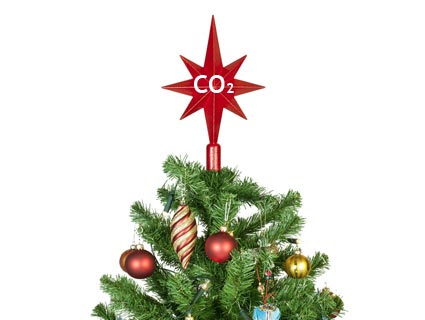 Adam Langley remembers starting his high school summer days at 5 a.m. to work on Harry Yates’ Christmas tree farm. In a fertile, North Carolinian corner of southern Appalachia, he and his friends would pack into a decrepit truck and roll up remote mountainsides armed with clippers, shears, and knee guards. At the top, in a plot where Yates specialized in Fraser fir, Langley and his crew spent their formative years pruning trees destined for hundreds of living rooms across the country that winter.

Langley, now an ecologist and professor at Villanova University, has worked over the past four years with his wife and fellow professor Samantha Chapman through a USDA grant to examine how North Carolina Christmas tree farms might mitigate climate change. Their results, taken from 27 sites across nine farms and published in a paper in November, show that certain techniques can allow the tree plots to act like natural sponges for atmospheric carbon. The potential, they say, lies in the dirt.

Tree farm soil, Chapman says, can absorb 10 times as much carbon as the wood itself. Cutting down on herbicide use and providing groundcover between rows of firs can double that concentration of carbon in the soil. The researchers’ goal is to see if carbon sequestration could potentially be profitable for struggling Christmas tree farmers who want to sell offsets, or amounts of carbon dioxide emissions avoided. If legislation is passed to limit emissions of greenhouse gases, these kinds of offsets could be sold to polluters who want to make up for their emissions elsewhere.

“The carbon builds up in the soil over time,” Chapman told me over the phone. “Some is sugar that’s eaten quickly, and some of it sticks around for thousands of years. And that’s the kind of soil we’re interested in capturing.” 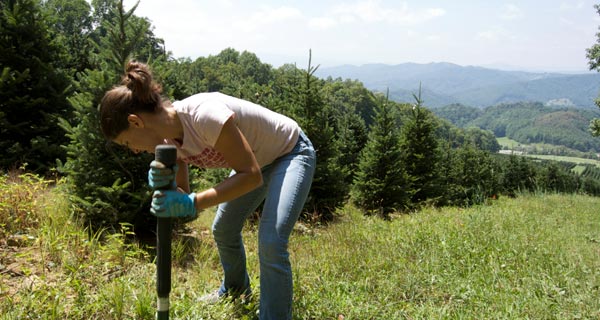 In September, Langley presented the team’s findings to a conference of North Carolina Christmas tree growers. “They were very receptive,” he said. “Farmers are often operating on a very thin margin. What they can do to increase carbon sequestration is in line with what they could do to improve the long term profitability of their farm.”

It was only a few decades ago Christmas tree farming, as opposed to harvesting naturally-occurring forests, emerged as a relatively new and promising industry. Harry Yates, Langley’s former employer who owns 200 acres of Fraser firs in Boone, North Carolina, took up the trade in 1979 when farming was beginning to boom. But the industry today is facing a significant challenge from plastic imports. “The fake trees from China, as we call them, are a major competitor,” Yates told me in a gruff drawl.

Doug Hundley, an integrated pest management technician who’s worked with North Carolina growers like Yates to better environmental practices for over 20 years, estimates that growers could increase tree sales by upwards of 30 percent if it weren’t for the fake imports. And while natural tree sales nationwide have decreased by 6 percent over the last half-century, fake tree sales have skyrocketed. “I think that real trees are not in nearly the number of households that they could be,” Hundley said.

Yates and Hundley, both of whom were in the audience during Langley’s presentation, say that they’re all for exploring the carbon sequestration capability of their trees, but that a profitable carbon market still seems a long way off. “We were making this green production system for plenty of other reasons besides that,” Hundley says. “If it turns out that it’s benefiting climate change then that’s great too.”

In the meantime, Langley and Chapman continue to work with a North Carolina extension agent to hammer out the mechanisms behind carbon sequestration on Christmas tree farms. Existing market or not, they’re hopeful. “Especially with the current administration and the fact that extreme climate events have happened recently,” Chapman says. “I think the impetus to do something is closer now.”