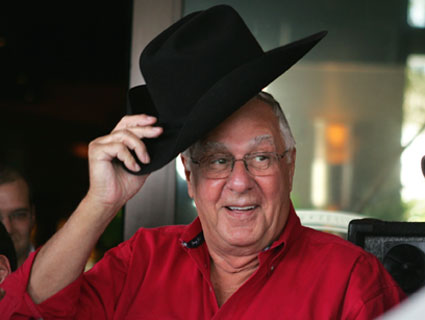 When the news broke in early December that former GOP Rep. Dick Armey had abruptly resigned as chairman of FreedomWorks, a powerhouse of the conservative movement and an instrumental force within the tea party, Armey maintained that the nasty split was due to differences he had with the top management of FreedomWorks about the group’s operations and future. Immediately, media reports disclosed that Armey had been concerned that Matt Kibbe, the group’s president, had used FreedomWorks resources to promote a book he had written (which was released in June) and that Armey himself had received an $8 million payout from a FreedomWorks board member to ease his departure. But internal documents obtained by Mother Jones show that the bitter war inside FreedomWorks has also resulted in allegations of staff wrongdoing (prompting an investigation by lawyers) and counter-allegations that Armey and his allies tried to turn FreedomWorks into a partisan outfit backing establishment Republicans over tea party insurgents.

On December 12, James Burnley IV and C. Boyden Gray, two FreedomWorks board members (and allies of Armey), sent Kibbe a letter informing him that they had received “allegations of wrongdoing by the organization or its employees.” They notified Kibbe that the group’s board of trustees had retained two attorneys, Alfred Regnery and David Martin, to conduct an independent investigation of the allegations. Burnley and Gray ordered Kibbe to cooperate with the lawyers, to make sure no records were “destroyed, deleted, modified or otherwise tampered with,” and to send Regnery a check for $25,000 to cover his initial fees. (Regnery, a prominent conservative, is the past president of Regnery Publishing, a right-wing firm that has put out books by Ann Coulter, Michelle Malkin, Pat Buchanan, and other notable conservatives.) The letter did not specify the allegations being investigated. In an interview with Mother Jones, Burnley declined to discuss the alleged wrongdoing at FreedomWorks. “The letter speaks for itself,” he says. Gray, Kibbe, and a spokeswoman for FreedomWorks did not respond to requests for comment.

Shortly after receiving the December 12 letter, Kibbe wrote a memo outlining his beef with Armey, Burnley, and Gray. In the document—titled “Republican Insiders Attempt Hostile Takeover of FreedomWorks”—Kibbe accused the three of being shills for the Republican establishment and undercutting the group’s standing as an independent, non-partisan, conservative organization. (FreedomWorks has at times endorsed tea party candidates in primary elections against mainstream or incumbent Republicans, drawing the ire of mainline Republicans.) Kibbe charged that the three men were trying to punish him for defying their effort to steer FreedomWorks into the conventional Republican fold. He contended that the divisive fight within FreedomWorks was not really about his book contract or other organizational matters; it was a grand ideological clash pitting those fully loyal to the tea party cause (such as Kibbe) against backroom, Washington-centric pols attempting to wield their influence to benefit their pals.

Noting Armey’s habit of coining maxims—and Armey’s complaint that Kibbe had hijacked media requests for Armey—Kibbe began his memo with a blast referencing a September 4 meeting at which Armey and Gray had voted Kibbe off the board of trustees and replaced him with Burnley, a secretary of transportation in the Reagan administration:

Our favorite “Armey’s Axiom” goes something like this: “Every argument in Washington, like in a marriage, is really about something else.” So it goes with the attempted hostile takeover of FreedomWorks by three Republican insiders from the old guard. Is it about a book contract, or a pilfered appearance on CNBC? No, it is not. As it turns out, the fight for lower taxes, less government and more freedom is all well and good until it is Republicans—”old friends”— that are the ones needing to be held to account. It is our sense that the irresponsible acts of the so-called Trustees of FreedomWorks—Dick Armey, C. Boyden Gray, and James C. Burnley—on September 4th, and their continued hostile acts today, are all about retribution for our willingness to take a strictly nonpartisan approach to politics, our willingness to hold both Republicans and Democrats to the standards set out by our freedom philosophy and the clear limits on government power delineated in our U.S. Constitution.

Kibbe then presented a timeline seeking to demonstrate that Armey, Gray, and Burnley had sold out the tea party cause to help less conservative Republicans.

His first example: the Republican primary contest earlier this year pitting Rep. Ben Quayle against Rep. David Schweikert, two House freshmen thrown into the same congressional district after redistricting in Arizona. In May, FreedomWorks endorsed Schweikert, who, Kibbe wrote, “had been willing to stand on principle even under tremendous pressure” from the GOP top brass. Quayle, according to Kibbe, had been too “reliable” a vote for the House Republican leadership, which FreedomWorks occasionally has opposed from the right. Yet Gray, the memo noted, was sending donations to Quayle, the son of former Vice President Dan Quayle. (Gray was White House counsel during the Bush-Quayle administration.) And Gray, Kibbe wrote, called him several times last summer “wondering why we were engaged in this primary fight.”

In the memo, Kibbe pointed out other conflicts as well. When Rep. John Mica, the Republican chair of the House transportation and infrastructure committee, was challenged by tea party freshman Rep. Sandy Adams in Florida in another primary race caused by redistricting, Kibbe wrote, Burnley, a transportation lobbyist, called Kibbe and “made it very clear…that he had a dog in this race.” And on June 16, when FreedomWorks announced its “Retire Hatch” campaign against Sen. Orrin Hatch (R-Utah), Gray endorsed Hatch. A month later, Gray held a fundraiser for Wisconsin senatorial candidate Tommy Thompson—two days before FreedomWorks endorsed tea party favorite Eric Hovde, who was challenging Thompson in the GOP primary.

All of these conflicts, Kibbe maintained in the memo, led to that September meeting when he was booted off the board. Referring to himself in the third person, Kibbe described that confrontation: “It is eight weeks out from the most important election in our lifetime. ‘Do you have any idea,’ Kibbe asks, ‘how much your actions will damage FreedomWorks efforts?’ No answer is given.”

The memo went on, with Kibbe taking Armey to task for having urged FreedomWorks to assist Thompson, who won the primary but whom the group had declined to endorse in the general election due to his “full-throated advocacy of ObamaCare,” and Rep. Todd Akin, the Republican Senate candidate in Missouri who had come under fire for his “legitimate rape” remarks:

One of the first actions taken by Dick Armey [after the September meeting] is his attempt to reassess our political priorities. “We have to help my friend Tommy Thompson,” he tells the staff in his first meeting with them. He later tells the staff that he has discussed the Missouri Senate race with “my friend [Senator] Roy Blunt, and he says they really need grassroots cover for Todd Akin.” FreedomWorks PAC had endorsed John Brunner, who barely lost to Akin [in the GOP primary]. We had declined to endorse Akin, even before “legitimate rape” became a late night punch line.

Bottom Line: The Actions of the Trustees Put FreedomWorks Values and Mission at Risk. They have put personal and political agendas above the agenda of freedom.

The memo does not indicate to whom the document was sent. Burnley tells Mother Jones he has not seen it and was unaware of its existence. Armey says the same.

About the time he drafted this missive, Kibbe also wrote a memo to the FreedomWorks board for its winter meeting on December 19. In it, he only gently referred to the internal troubles:

Dick Armey’s recent resignation from FreedomWorks was, for me, one of the most difficult [changes] to absorb. There was a time when he was a father figure to me, and we collaborated on things like our bestselling book Give Us Liberty. This particular change has been painful. But we respect his desires and wish him all the best in future endeavors… Unfortunately, what I had hoped to be a quiet and focused transition has instead attracted quite a bit of media attention.

He noted that the group’s freedom-defending mission was more important than “parlor intrigue.”

For his part, Armey is not so diplomatic. After being read portions of the Kibbe document, he says, “One of the most fascinating art forms in Washington is that of the perpetrator as victim. Matt Kibbe seems to have maintained it with this memorandum.”

Armey takes issue with Kibbe’s claim that he kowtowed to the GOP establishment. “After September 1, I was indeed getting reports from Wisconsin and Missouri that we could win those Senate races and also pull it out in these states for Romney,” Armey remarks, defending his decision to urge FreedomWorks to swing behind Thompson and Akin in the fall (after their primary wins). “The alternative in these states was that liberal Democrats win and so does Obama.” And Armey scoffs at the charge that he, Gray, and Burnley tried to subvert FreedomWorks and its devotion to the tea party cause to please the GOP mainstream in Washington. “There’s nobody at FreedomWorks or on the board who suffered more criticism and abusive complaining and expressions of disappointment from establishment Republicans for the actions of this organization than C. Boyden Gray, Jim Burnley, or Dick Armey,” Armey insists. “None of us ever suggested we change what we were doing in response to the complaints.” Armey notes that he was an early endorser of Sen. Marco Rubio (R-Fla.), a tea party favorite who faced a sitting Republican governor in a primary, and Senator-elect Ted Cruz (R-Texas), a tea partier who defeated a sitting Republican lieutenant governor in the GOP primary.

Kibbe’s memo does not reveal whether Kibbe is ready to go public with his harsh charge that Armey, Gray, and Burnley have betrayed the tea party movement, and the Burnley-Gray letter does not indicate whether the legal probe they ordered will threaten the operations of FreedomWorks. But with the House Republican leadership in disarray and the National Rifle Association under fire after the Newtown shootings, the raging civil war at FreedomWorks is yet more bad news for conservatives at the end of 2012.