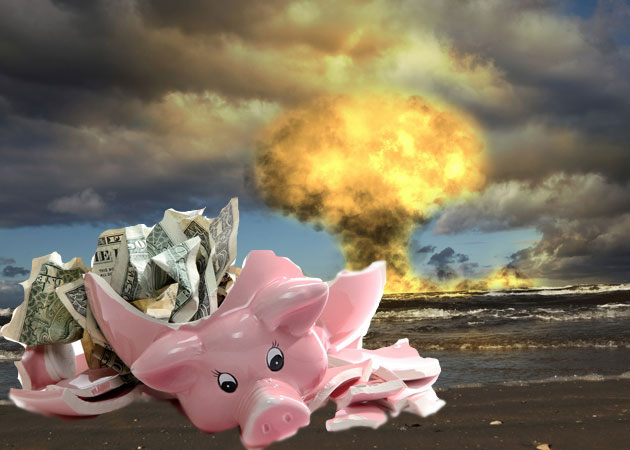 Wild bets by taxpayer-insured banks helped put the US economy in the toilet four years ago. With financial regulators scrambling post-election to finalize long overdue rules for Wall Street, banks have intensified their war on regulation. In particular, the financial industry is lobbying like mad to add key loopholes to the Volcker rule, a provision of the sweeping 2010 Dodd-Frank financial reform act that is supposed to restrict high-risk speculation by commercial banks.

During the campaign, Mitt Romney vowed to repeal Dodd-Frank, and regulatory agencies were waiting to finish crafting the details of the Volcker rule. Whether that rule will emerge as Congress intended, or as a watered-down half-measure, is what’s at stake in the current battle between reformers and industry.

Though regulators, under intense pressure from industry, have been dragging their feet on finalizing its exact parameters of the rule, the need for it was reinforced as recently as May, when JPMorgan Chase lost $2 billion on a monster credit derivatives trade.

At issue are several provisions that would allow lucrative exemptions to the rule’s ban on proprietary trading (that is, when a firm trades for its own benefit). Bart Chilton, a commissioner on the Commodity Futures Trading Commission, one of the regulatory agencies charged with writing the regulations, says one of the most important sections is the one that permits banks to engage in some trading to hedge against risk. Chilton says that depending on how the definition of “hedging” is drawn up, banks could rely on this provision to make speculative and dangerous bets. “We would say, ‘Bad banks!'” he notes. “And [the banks] would just say, ‘No! We’re just hedging!'” Chilton says if “we don’t get it right,” this could be a giant loophole. “The largest speculators on the planet want a loophole they can drive a large truck through,” he says. “It would make the entire Volcker rule ineffectual.”

Professor Michael Greenberger, a law professor at the University of Maryland who previously worked at the CFTC, agrees that if the definition of hedging isn’t watertight, banks could claim that almost any investment is a hedge against risk.

Chilton and Greenberg point out that another problematic provision concerns “market-making,” which is when banks hold inventories of stocks and bonds to meet customer demand. Depending on how the rules define market-making, Greenberger says, this provision could allow banks to “go out and create the very kinds of trades you don’t want banks doing on a proprietary basis.” This would “eat away” the entire Volcker rule, he says.

Semantics are worth a lot here. According to Better Markets, a financial reform advocacy organization, proprietary trading represents tens of billions of dollars annually to the biggest banks. It’s “the biggest pot of gold for Wall Street,” says Dennis Kelleher, president and CEO of the group. As a recent report by Standard & Poor’s notes, a stiff Volcker rule would cut $10 billion in combined profits for the eight largest banks.

So it’s not surprising that the finance industry is fiercely attacking the rule. “It’s relentless, nonstop, day and night lobbying,” says Kelleher. “It is absolute total nuclear war that Wall Street is engaged in here.”

Chilton feels the pressure up close. “They’re not kidding around,” he says. “These guys are not a couple of guys out in the countryside. They’re the most powerful banks in universe.”

Anna Pinedo, a partner at the law firm Morrison Foerster, who advises financial institutions on regulatory issues, says that banks’ interest in clarifying the rule is technical. They just want to know “which activities are covered and which are not covered.” Others are more dire. Next week, the House Financial Services will hold a hearing on the status of the rule’s implementation, at which “[w]itnesses from the private sector will speak to the destructive effects the Volcker Rule will have on businesses seeking access to the capital markets and on individual investors.” The American Bankers Association, in a September letter to Rep. Spencer Bachus (R-Ala.), the chair of the House Financial Services Committee, advocated repealing the Volcker section of Dodd-Frank. The industry group claimed the rule would do “harm to credit availability and market liquidity,” “impair traditional banking services,” and “impose costs on banks.” The Association complained that the “scope of activities was far too…complicated.”

Paul Volcker would agree. Last year, in his first public comments on his namesake proposal, he said, “I’d write a much simpler [Volcker rule]. I’d love to see a four-page bill that bans proprietary trading.”

That’s not going to happen, with multiple provisions of the Volcker rule still up in the air at various agencies, according to Chilton. Reformers, though, hope that it gets set in stone soon. Senators Carl Levin (D-Mich.) and Jeff Merkley (D-Ore.), the authors of the Volcker section of Dodd-Frank, recently sent regulators a letter telling them to hurry it up.

Greenberg says whether the final rule favors consumers or banks may hinge on Obama’s  appointments for Treasury secretary, and chairmen of the CFTC and Securities and Exchange Commission. (Bloomberg called the president’s recent SEC chair appointment, Elisse Walter, a “Wall Street lapdog.”) Greenberg notes that for the Volcker rule, and Dodd-Frank as a whole to work, the Obama administration will have to be more aggressive this term. “We will need support from the President and Secretary of the Treasury to ensure the rules are properly implemented.” That is, after the nuclear war is over.