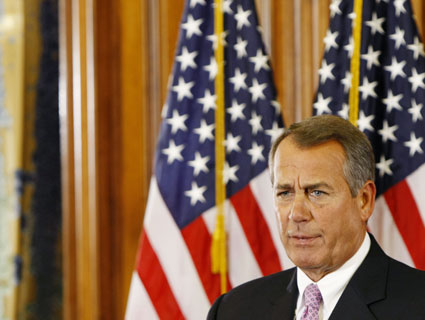 In the past week or two, there’s been crowing on the left about anti-tax crusader Grover Norquist’s slipping influence, as a small—emphasis on small—number of congressional Republicans murmur that they might accept a tax/spending deal that includes a hike in rates for the wealthy. For years, Norquist has been the whip of the conservative movement, leaning on GOP candidates and legislators to commit to and stand by a no-tax pledge and acting as prosecutor, judge, and jury whenever any Republican considered any initiative that might possibly be characterized as a tax increase. But as President Barack Obama bargains (toughly) with House Speaker John Boehner as the fiscal cliff (or bump) nears, Norquist, his cachet waning or not, is not Boehner’s problem. He is not the force that is preventing the speaker from striking a deal with an electorally energized Obama. The true obstacle is Boehner’s own comrades: those scores of tea partiers in the House Republican caucus who detest compromise—especially with the president. As Boehner tries to forge an accord with Obama, he has to watch carefully his colleagues and his back.

This has been the challenge for Boehner for the past two years. There’s not much doubt that in the summer of 2011 he sincerely desired attaining the so-called grand bargain Obama offered: spending cuts and Medicare and Medicaid reductions (that were harder on providers than beneficiaries) in return for greater tax revenues squeezed from the wealthy and corporations and a hike in the debt ceiling. And Boehner presumably would fancy producing such a mighty deal now. But two summers ago Boehner was warned by moderate Republicans in his caucus that if he accepted anything resembling the package Obama was offering he would face a rebellion, perhaps a mutiny, within his own caucus that might be led by House Majority Leader Eric Cantor. That could have led to his demise as speaker.

This basic dynamic—Boehner cannot haggle freely with the president due to the intense opposition to a deal within his own ranks—has not fundamentally changed. What has changed is the president’s hand. According to senior administration officials, Obama is not eager to go over the cliff, but he is willing. If no deal is reached by the end of the month, all the Bush tax cuts—for the rich and not rich—will evaporate. Obama would then demand in early January that the new Congress immediately pass legislation to reinstate the lower tax rates for the bottom 98 percent. Boehner and the Republicans presumably will find it difficult to say no and insist they will only vote for such tax relief if it includes breaks for the wealthy or cuts in Medicare and other government spending. As a Democratic strategist close to the White House says, “For years we’ve tried to make the case that the Republicans are willing to hold up tax cuts for 98 percent to help the guys at the top. This is the cleanest shot we’ve gotten at this.”

On the surface, there have been signs of movement within the House Republican caucus after the recent election. Several of Boehner’s colleagues, led by Rep. Tom Cole (R-Okla.), have said that they could accept a compromise that would include higher tax rates for the rich. Rep. Mike Simpson (R-Idaho), for instance, said he “wouldn’t have a problem with letting those tax rates [for the high-end earners] go up.”

Democratic strategists on and off Capitol Hill suspect that these Republicans are uttering such statements with Boehner’s approval (perhaps even at his request) to provide the speaker more negotiating room—with the White House (“look, we Republicans are trying to be reasonable”) and, more important, with the hardliners of his own caucus (“look, our party is divided on this point, we have to give a little”). Yet there’s no sign yet the tea partiers will afford Boehner much flexibility.

The tea partiers did take a hit in the last election. Two prominent members of the caucus, Joe Walsh and Allen West, were sent packing, and its chair, Michele Bachmann, barely survived. But of the 55 members of the tea party caucus, at least 51 won reelection
—and there are others in the House GOP caucus who identify with the tea party. This group still is the most powerful bloc among the House Republicans. And given that many of these tea partiers represent gerrymandered districts safe for GOPers but where they could face a primary challenge from the right should their anti-Obama resolve slacken, these die-hard Rs, who have ideological reasons for opposing a deal, also have plenty of political motivation to decry compromise.

That means they have cause to make life tough for Boehner. Not only might they oppose any package he crafts with Obama, costing Boehner votes he will need to bring to the table; they could threaten Boehner’s speakership. On January 3, House Republicans will meet to vote for their speaker for the next Congress. If 18 or so tea partiers don’t vote for Boehner—they can vote for a GOPer who decides to challenge Boehner, someone else (a candidate for speaker doesn’t even have to be nominated), or merely vote “present”—he will not become speaker. Under House rules, the roll call vote is repeated until someone receives a majority of the votes cast. It would only take a small collection of ticked-off Republicans to block Boehner or delay his reelection as speaker.

Cantor, meanwhile, remains in the wings. “He has become overly ambitious,” says a former House Republican who remains in contact with his past colleagues, “and he has only one constituency now: the House tea partiers.” And despite the mini-boomlet of House GOPers expressing acceptance regarding an increase in tax rates for the rich, this ex-Republican lawmaker notes there has been “no shift” in the overall attitude of House tea partiers and, consequently, no major change in the power balance within the Republican caucus. Boehner remains in a position to be held hostage by his own Jacobins.

The speaker could try to just say no to his conservatives and forge ahead, daring them (and perhaps Cantor) to take a run at him. But he has not demonstrated such moxie in the past. During the fight at the end of last year over extending Obama’s payroll tax cut, Boehner did reject the call of his tea partiers to hold firm in opposition—yet only after Senate Republicans decried the House GOP’s obstructionism on this point.

Boehner is in a jam, and Obama has greater leverage this round. When the president struck the 2010 lame duck tax-cut accord with Republicans and won a second stimulus in return for a two-year extension of the Bush tax cuts for the upper brackets, he vowed that was a one-time only deal. Not many political observers paid attention to that pledge. After all, Obama had vowed during the 2008 campaign to smother the Bush tax breaks for the wealthy, and he had traded that promise for this second stimulus. But now Obama will get what he wants—the expiration of those tax cuts for the rich—if nothing happens, if no big deal emerges. So he can afford to play it tough.

According to White House aides, Obama is holding firm on two key demands for a pre-cliff deal: some sort of boost in the upper-bracket tax rates (maybe not an immediate return to the full pre-Bush levels) and an agreement on raising the debt ceiling that will avoid another going-over-the-edge confrontation. Both of these demands will be difficult for Boehner to meet, especially with House conservatives eagerly eyeing the debt ceiling as another opportunity to extract ransom from the White House.

The current crisis—or near-crisis—is not a matter of policy. It’s politics. Left to his own devices, Boehner would probably be delighted to okay an agreement that was Simpson-Bowles-ish, light up a Camel, and call it a day. But he remains the leader of a pack that includes dozens who either have a theological antipathy to raising taxes on the wealthiest or fear being mau-maued from the right—or both. Can he abandon or whipsaw this gang? This has been Boehner’s problem all along—and it’s not likely to disappear just because there’s a holiday or a cliff ahead. You usually have to dance with the ones who brung ya—even if they are lemmings running toward the edge.