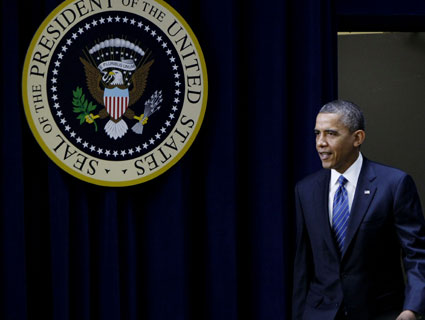 It’s one thing to expand executive powers when your guy is in the White House—but what if the other party holds the Oval Office? That’s what elite conservative legal minds were mulling at an American Enterprise Institute event Friday headlined “Founders betrayed? New threats to US democracy and rule of law.” Conservative luminaries, including Bush-era torture-justifier John Yoo, warned of a grave constitutional threat in the Obama administration’s use of executive power.

CATO institute fellow Nicholas Rosenkranz said Obama had seized a “vast amount of executive power” by allowing people who entered the country illegally as children to stay (though as my colleague Adam Serwer pointed out last summer, presidents from both parties have long claimed the authority to grant stays of deportation). He was also concerned about the possibility that the DOJ may decline to enforce federal drug laws in states that recently legalized pot. (This coming from the same school of thought that says the 10th amendment allows states to ignore federal laws they don’t like.) “For those of you who are nervous about some of the tendencies of of this particular president,” Rosencranz said, “I would keep your eye on the executive choices like declining to execute law.”

He said Congress should clarify that the president must enforce federal laws. Would this, then, apply to Obamacare under a “President Ryan in 2017,” asked moderator Henry Olson, director of AEI’s National Research Initiative. Well, yes, Rosencranz said—yes, it would.

Yoo argued that the “progressive movement’s” usurpation of power in the executive branch has been snowballing for years, starting with Woodrow Wilson’s wartime mobilization, and expanding with FDR’s New Deal and Lyndon Johnson’s Great Society. He labeled the Obama administration the “4th wave” of progressivism, its “pinnacles” being Obamacare and the Dodd-Frank financial reform law. Yoo said that in order to counter a liberal expansion of executive power, conservatives needed to abandon their own, Reagan-era tactic of broadening the president’s authority:

The “‘Reagan Revolution in law’ was built on certain kinds of assumptions about the way government worked, where the primary enemy to reducing the burden on liberty was Congress, and the primary protector was going to be the presidency, particularly through using the president’s power to centralize control over the agencies. So that led to a number of doctrines that the Reagan administration and those that followed pursued, such as trying to keep strict barriers on the way Congress could enact legislation, trying to protect a fairly large area of exececutive discretion… and keeping the courts out of the business of reviewing regulations.”

It only so happened that at the time, the White House was in Republican hands and Congress was dominated by Democrats. Some legislative fixes Yoo  floated: backtracking on the 1984 Chevron doctrine that the courts must defer to “reasonable agency interpretations” of the law; enacting legislation to require Congressional review for major agency rules; and putting new regulations through a cost-benefit analysis.

He offered other, “more mischievous” options too:

“Why not have agency budgets subject to reduction in proportion to the amount it costs the economy? If you enact a rule that costs a certain amount to the economy, then the agency’s budget also falls by a similar amount. Or the number of jobs lost in the economy that year—that’s the amount federal employment as a whole will go down. This will focus the… bureaucrats.”

To be clear, though, all this talk of hemming in the White House? It doesn’t apply to things like going to war, Guantanamo, or, presumably, torturing detainees. “I’m not taking about executive power in regards to foreign affairs,” Yoo said, “which I think is wholly different.”