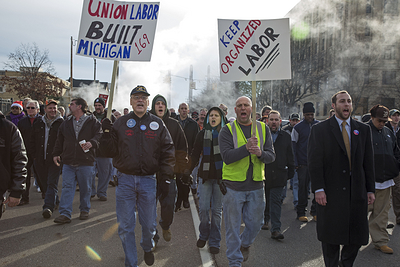 The GOP’s crusade against unions is taking center stage in Michigan, a stronghold of organized labor.

On Thursday night, with the blessing of Republican Gov. Rick Snyder, Michigan’s Republican-controlled Legislature passed a trio of so-called “right-to-work” bills targeting unions in the public and private sectors. The bills would ban unions from collecting dues from nonmembers to pay for wage and benefits negotiations that benefit unionized and nonunionized workers. Right-to-work laws have the effect of draining labor unions of money and members, as seen in the 23 states where such laws are on the books. Snyder says he will sign the measures into law when they arrive on his desk, despite saying last year that right-to-work could divide the state. Michigan would become the 24th right-to-work state.

The Michigan House of Representatives voted 58-52 to pass its version of a right-to-work bill for private companies. Soon after, the state Senate passed a private-sector right-to-work law 22-16 and a similar public-sector bill 22-4. Michigan senate Democrats walked out of the chamber before the second vote, while four Senate Republicans—Tory Rocca of Sterling Heights, Tom Casperson of Escanaba, Mike Nofs of Battle Creek, and Mike Green of Mayville—voted against the right-to-work bills.

Only police and firefighters are exempt from the state Senate’s public-sector right-to-work laws.

The Republican lawmakers who supported the bills said the measures give workers the freedom to join a union or not. But that’s not quite right. Workers are never required to join a union. They can, in states without right-to-work laws, be required to pay some dues to a union for representing them in negotiations with management. That’s because nonunion workers in that workplace benefit from a union-negotiated contract just like union members; the union can also be required to represent nonunion workers in a workplace conflict. In right-to-work states, nonunion workers who don’t pay dues but benefit from union representation are called “free riders.” Free riders drain union treasuries of money, economists have found, while shrinking union membership by 5 to 10 percent.

Democrats and unions argued the bills are intended to kneecap organized labor. “This bill is not about giving people choice; this bill is about breaking unions,” state Rep. Steven Lindberg (D) said, according to the Detroit Free Press.

Before the Michigan Senate voted on the right-to-work bills, Democratic state Sen. Morris Hood III read aloud a statement from the White House opposing the bills. “President Obama has long opposed so-called ‘right-to-work’ laws and he continues to oppose them now,” the statement read. “The President believes our economy is stronger when workers get good wages and good benefits, and he opposes attempts to roll back their rights.”

This November, labor unions and state Democrats had tried to preempt this turn of events. The labor-backed Proposal 2 would’ve permanently blocked right-to-work laws in Michigan and guaranteed collective bargaining rights in the state constitution. But only 43 percent of voters backed the ballot measure on Election Day.

There are echoes of Wisconsin’s 2011 battle over workers’ rights in Thursday’s controversial votes in the state Legislature. Just as Wisconsin Gov. Scott Walker didn’t campaign on curbing workers’ rights, Michigan’s Snyder had previously told the Free Press that right-to-work wasn’t a priority of his. Now Snyder wants right-to-work right away, having stood alongside GOP leaders in pushing the anti-union legislation.

Unions and their supporters packed into the state capitol in downtown Lansing to protest the right-to-work bills as they did last year in Madison, Wisconsin, to stop Walker and the Wisconsin GOP from curbing bargaining rights. In Michigan, though, some supporters and opponents didn’t make it inside the capitol after police briefly locked the doors and blocked the crowd outside, which included United Auto Workers president Bob King, from entering. Later, labor officials got a court order from a county circuit judge to reopen the capitol.

And just as Walker’s battle with his state’s unions unfolded in the state that first organized public workers, the Michigan GOP is battling labor in the birthplace of the United Auto Workers, one of the most powerful unions in history. (Mother Jones union employees, including myself, are members of UAW Local 2103.)

A senior labor official with the American Federation of State, County, and Municipal Employees (AFSCME) tells Mother Jones that unions are ramping up to persuade Snyder not to sign the right-to-work bills next week. There will be a civil disobedience training in Detroit on Saturday, workplace actions on Monday, and then on Tuesday, when the state House goes back to work, unions hope to bring thousands of protesters to Lansing—all in opposition to Michigan’s right-to-work bills. “Rick Snyder is the new Scott Walker,” the official says. “We’ll make sure the voices of working men and women are heard in Michigan.”