“WHEN THEY TELL YOU NOT TO PANIC, THAT’S WHEN YOU RUN!” John Cusack screams at his ex-wife over the phone in Roland Emmerich‘s 2009 disaster movie 2012. Cusack races through a Los Angeles suburb in a black limousine, trying to warn his family of the coming End Of The World. Next thing they know (at the exact moment Gov. Arnold Schwarzenegger is telling everybody to remain calm), all of California spontaneously falls into the sea and LA is thrown into a seething apocalyptic firestorm—just as the ancient Mayans foretold!

Meanwhile, in the real world, the National Aeronautics and Space Administration, a.k.a. NASA, is on the multimedia warpath to reassure American citizens that Roland Emmerich is wrong, and Planet Earth will mostly likely not experience a cataclysmic death this December.

There’s plenty of confusion for NASA to address: There are several distinct theories out there predicting the world as we know it will cease to exist on December 21, 2012. Some of these theories are based on questionable readings of the I-Ching, or misguided analysis of the ancient Mayan Long Count calendar (a flawed interpretation that tends to piss off real-life living Mayans and the researchers who are most familiar with the calendar). Some say the world will end when we all get sucked into a black hole. Others claim that in a couple weeks Earth will collide with the nonexistent rogue planet “Nibiru,” thus ruining everything forever. Pseudo-scientific doomsday speculation has gained so much attention over the years it’s ingrained itself into our pop-culture: The theories have provided the basis for the aforementioned big-budget John Cusack movie, inspired college courses, and earned a special on Fox News this past November.

Though this all might seem like little more than a collection of laughable fringe superstition, promulgation of these beliefs do have troubling real-world consequences. “I get 1-2 [questions] a month from a person who self-identifies as 11-12 years old, who is contemplating suicide,” David Morrison, a senior scientist at the NASA Astrobiology Institute, told ABC News. (Speaking to a USA.gov blogger, Morrison later said that he gets a message at least “once a week” from “a young person…who says they are ill and/or contemplating suicide because of the coming doomsday.”) Morrison also highlighted a letter he received from someone claiming to be a middle school teacher in California, who wrote that parents of a student said they were going to kill their kids and themselves before the 2012 apocalypse.

On top of that, there’s polling data to suggest that 12 percent of Americans believe the world is coming to an end this year (and that 14 percent worldwide think they will live to see the planet go poof).

NASA, for its part, has blanketed its social-media operation with anti-doomsday content, in an attempt to chip away at public misconceptions over what will or will not end this December.

On November 28, six NASA scientists and representatives hosted a Google+ hangout titled, “Beyond 2012,” dedicated to countering end-of-the-world rumors circulating on the internet: “Contrary to some of the common beliefs out there, Dec. 21, 2012 won’t be the end of the world as we know [it], however, it will be another winter solstice,” the description page reads. 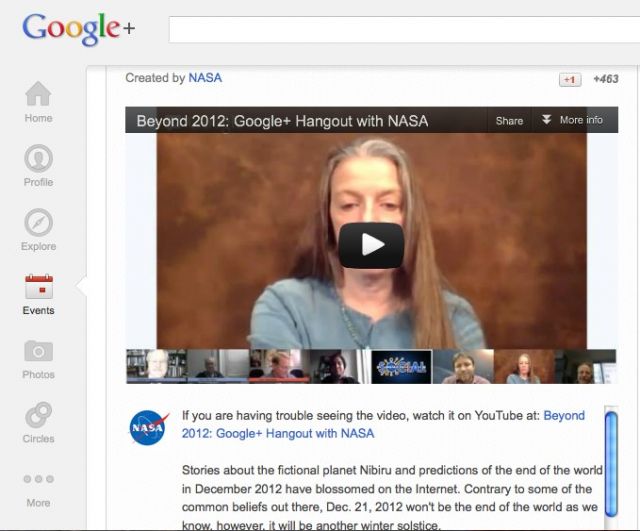 The hangout had 2,113 participants. Here’s the YouTube clip of the hour-long session:

NASA’s social media gurus also reached out to the agency’s nearly million and a half fans on Facebook. This post received 9,502 likes, 905 comments, and 4,481 shares: 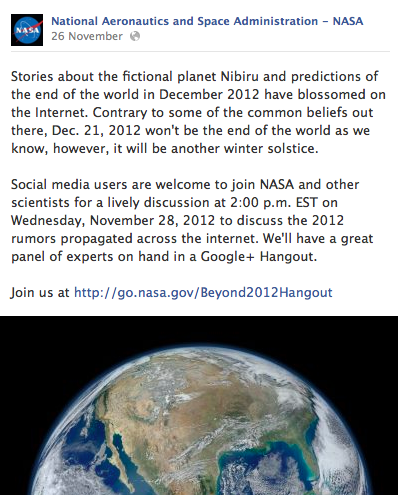 Internet telling you the world will end in 2012? Don’t believe it! Get the real science facts here. go.nasa.gov/cQnq0L

NASA received so many inquiries about whether or not human civilization was imminently screwed that the agency created a special tab on the Frequently Asked Questions section on its website. The webpage acts as an explainer for anxious readers, addressing “‘Prediction’ Origins,” the “Mayan Calendar,” “Total Blackout,” and “Meteor Strike,” among other topics: 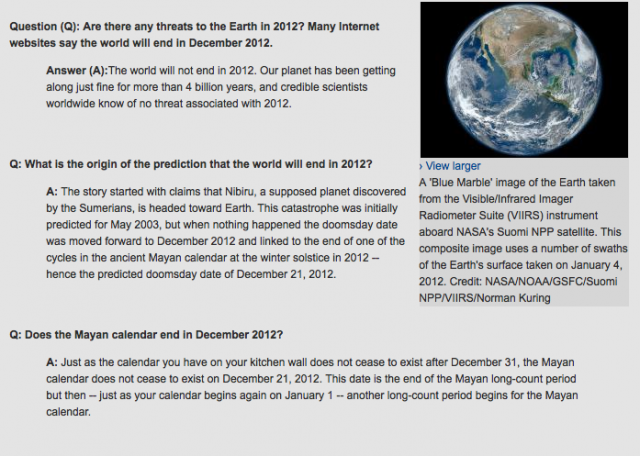 One of the last question-and-answer pairs is especially blunt:

Q: How do NASA scientists feel about claims of the world ending in 2012?

A: For any claims of disaster or dramatic changes in 2012, where is the science? Where is the evidence? There is none, and for all the fictional assertions, whether they are made in books, movies, documentaries or over the Internet, we cannot change that simple fact. There is no credible evidence for any of the assertions made in support of unusual events taking place in December 2012.

Fortunately for NASA scientists, they’re not alone in their battles against web-disseminated apocalypse-hysteria. The Russian government—as well as the Russian Orthodox Church—has been busy attempting to quell national anxieties. Government officials in Mexico, France, and elsewhere have been doing the same.

One member of Russian parliament’s environment committee has a drastic measure in mind: Prosecute Russian citizens who spread the rumors, but only starting December 22.

As of press time, NASA has yet to promote a solution that severe. Twitter, Facebook, and Google+ will have to do.