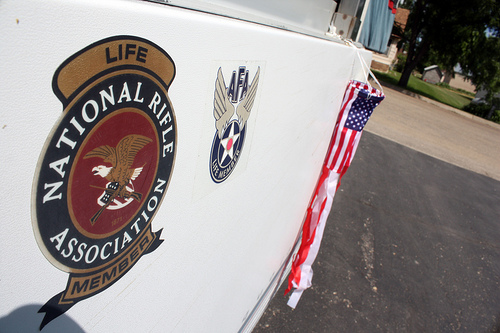 For years, the National Rifle Association, the nation’s mighty gun lobby, has pushed legislation that would ban doctors from asking their patients about guns in the home. Just as a pediatrician might ask a young patient about how much he or she exercises or what’s going on in school or in his or her social life, that doctor might also ask about a patient’s home life and if there are guns in the home. The NRA’s “Firearms Owners’ Privacy Act” would block that, despite the obvious First Amendment problems such a bill raises. Critics of the NRA-authored ban have dubbed the fight “Docs vs. Glocks.”

The killing of 26 people, including 20 first graders, at Sandy Hook Elementary School in Newtown, Conn., by 20-year-old Adam Lanza has reinvigorated the debate about the presence of guns in American life. Who should be allowed to own guns? How should guns be stored? What types should be available to the average consumer? How many guns should one person be able to own? You’ve heard these question before: They were raised after the Columbine killings in 1999, the Virginia Tech killings in 2007, the Aurora, Colo., movie theater killings in July, and on and on.

Here’s another question worth asking: In the wake of the Newtown killings, as advocates and lawmakers search for ways to stop future gun violence, will the NRA keep up its fight to block doctors from asking about guns? The NRA broke its silence after the Newtown killings with a statement saying it was “prepared to offer meaningful contributions to help make sure this never happens again.” The group did not offer specifics, and NRA spokesman Andrew Arulanandam did not immediately respond to a request for comment. (We’ll update this post if he does.)

There is a real health issue here: As Mother Jones‘ Adam Weinstein points out, research shows that even law-abiding citizens and their families who keep guns in the home are at a greater risk for getting killed by gunshot. And according to the American Academy of Pediatrics, in 2009, one in five deaths among people under the age of 20 was caused by a firearm-related injury.

With the NRA’s help, six states—Alabama, Minnesota, North Carolina, Oklahoma, Tennessee, and West Virginia—have tried to pass the Firearms Owners’ Privacy Act. None have succeeded. Florida’s GOP Gov. Rick Scott and Republican-controlled legislature have brought the NRA the closest to victory in the Docs vs. Glocks fight.

The NRA launched Docs vs. Glocks in Florida after hearing of an Ocala resident had asked a young patient’s mother whether she owned any guns; the mother wouldn’t answer, and so the doctor declined to treat her kid. The NRA and its Florida-based super-lobbyist, Marion Hammer, then crafted the Firearms Owners’ Privacy Act, allowing doctors to ask about guns in the home only when they deeply believe such questions matter to “the patient’s medical care or safety, or the safety of others.”

Scott signed the bill in early June 2011, on one of the first days of National Home Safety Month.

The state’s pediatricians soon sued to stop the law, which a Miami circuit judge did months later, saying the law violated doctors’ First Amendment rights. The state of Florida has appealed the decision.

The NRA also features the Docs vs. Glocks fight in its political candidate questionnaires. A July 2011 NRA questionnaire for Virginia candidates for office includes this question:

The American Academy of Pediatrics encourages its members to ask many intrusive questions of their patients under the ruse of preventing “gun violence.” In doing so, doctors—particularly pediatricians—have been questioning patients about the presence of firearms in one’s home. Do you believe firearm ownership is your personal matter and doctors should stop questioning patients about firearm ownership?”

Thomas Julin, a South Florida attorney who represented several doctors’ associations in fighting the Firearms Owners’ Privacy Act, wrote in a July op-ed that the law’s real intent was to “censor doctors who might advocate gun control legislation the NRA opposes.” But the NRA’s politically motivated attack on doctors’ free speech rights, Julin writes, misses the benefit of a simple question or two. “Doctors who see children bearing bullet holes on a regular basis,” he writes, “can be very powerful advocates.”