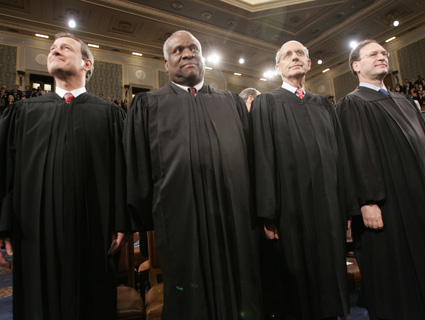 The Supreme Court has finally decided to take on same-sex marriage. In an announcement Friday, the court said it will hear two cases: One of them will determine the constitutionality of California’s Proposition 8, a referendum that stripped same-sex couples of marriage rights in that state. The other involves the portion of the federal Defense of Marriage Act (DOMA) that prevents the federal government from recognizing same-sex marriages performed by the states. The risk here for same-sex couples is very great, as EJ Graff explains in a piece for The Advocate, because the two cases differ widely in scope and potential impact. (My colleague Dana Liebelson has a great explainer here.)

The DOMA case asks the justices to strike down the federal law that dictates which marriages are valid. Even better for supporters of same-sex marriage: Of the several DOMA cases the court could have taken, it decided on Windsor v. United States, in which plaintiff Edith Windsor was unable to claim an estate-tax deduction after her female partner died. Between striking down part of a heavy-handed federal statute and helping someone get a tax cut, it’s the kind of same-sex marriage case even a conservative justice could love. Most importantly, from the point of view of getting the requisite five votes, striking down that part of DOMA would not prevent states from banning same-sex marriage.

The Prop. 8 case argues something much broader, however: It claims there is a fundamental right to same-sex marriage in the Constitution, and that any attempt to ban same-sex marriage violates the 14th Amendment. The Ninth Circuit’s ruling was written so narrowly that if the Supreme Court had decided not to take the case, then the Ninth Circuit’s decision would have affirmed the rights of same-sex couples in California alone. But if SCOTUS were to affirm the constitutionality of California’s ban on same-sex marriage, the ruling could well apply to any such law nationwide.

The court could side with marriage equality in one case, but render discrimination constitutional in another.

Not only that, the American Prospect‘s Gabriel Arana wrote in 2009 that “defeat could legitimize such discrimination against LGBT Americans, making it far more difficult to sue for parental or housing rights.”

When Chief Justice John Roberts sided with the court’s liberal justices in the challenge to the Affordable Care Act (a.k.a. Obamacare), he showed a willingness to split from his conservative colleagues on cases of political and historical import. And Justice Anthony Kennedy authored opinions in Romer v Evans and Lawrence v Texas, the landmark cases that paved the way for subsequent advances in LGBT rights. Still, both men are conservative by nature, and up until November no state had recognized same-sex marriage rights by popular vote. Roberts and Kennedy could well prove sympathetic to conservative arguments that finding a right of same-sex couples to be free of discrimination amounts to “forcing” same-sex marriage on everyone else. It seems entirely possible that the court could side with marriage equality in the DOMA case while rejecting the argument that same-sex couples have a constitutional right to marry the person they love. The Justices could side with marriage equality but also render discrimination constitutional.

On the other hand, both justices have to know that the country is starting to lean towards marriage equality, so they may be disinclined to issue a broad ruling in either direction. (According to SCOTUSBlog’s Lyle Denniston, the court has potential exit strategies in both cases—it could avoid any major decisions by ruling on legal technicalities.) Even in the worst-case scenario, public opinion is trending quickly enough that any setback, no matter how painful, would probably be temporary.